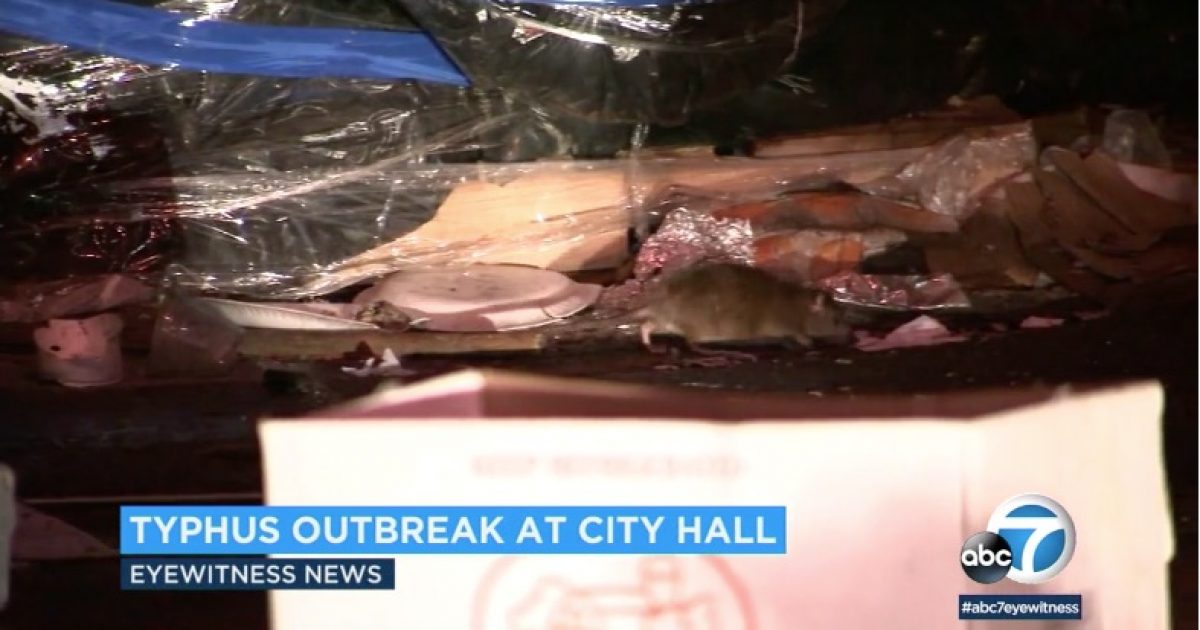 An epidemic of Typhus in Los Angeles is apparently spreading to City Hall.

All carpets at Los Angeles City Hall may need to be replaced amid a Typhus outbreak that may have infected one city employee while at work, according to a motion filed by Council President Herb Wesson on Wednesday.

Wesson first became aware of a vermin issue in November 2018, contacted pest control experts and removed all his office’s carpets, according to the motion.

The motion reported cleanup issues and a noticeable increase in rodents in the area, which could have contributed to the outbreak.

The video of the news story shows rats running around inside City Hall.

Typhus is an infectious disease caused by fleas.

The disease is typically caused by infected fleas, which hitch rides on rats, and their feces. It can also be spread by cats and opossums, according to health officials. Downtown Los Angeles has been battling an outbreak since October that was linked to homeless street encampments, officials said.

“We had an employee or two mention they heard something in the ceiling,” City Council President Herb Wesson told the AP as he walked through his office, where he recently had all the rugs ripped out. “Then we had an employee spot what she believed to be paw prints.”

A surging homeless population was the origin of the current Typhus epidemic hitting Los Angeles. Typhus cases were up about 55 percent in 2018.

The California Department of Public Health (CDPH) has confirmed 167 typhus cases during 2018.

This data was published on February 1, 2018, and represents a 55 percent increase from 2017 when only 102 typhus cases were confirmed by CDPH.

The Centers for Disease Control and Prevention provides information on Typhus.

Epidemic typhus, also called louse-borne typhus, is an uncommon disease caused by a bacteria called Rickettsia prowazekii. Epidemic typhus is spread to people through contact with infected body lice. Though epidemic typhus was responsible for millions of deaths in previous centuries, it is now considered a rare disease.

Symptoms of epidemic typhus begin within 2 weeks after contact with infected body lice. Signs and symptoms may include:

The inability of Los Angeles to control its homeless population is responsible for the spread of Typhus.

Now that City Hall employees are affected, city officials will be prompted to address the problem.