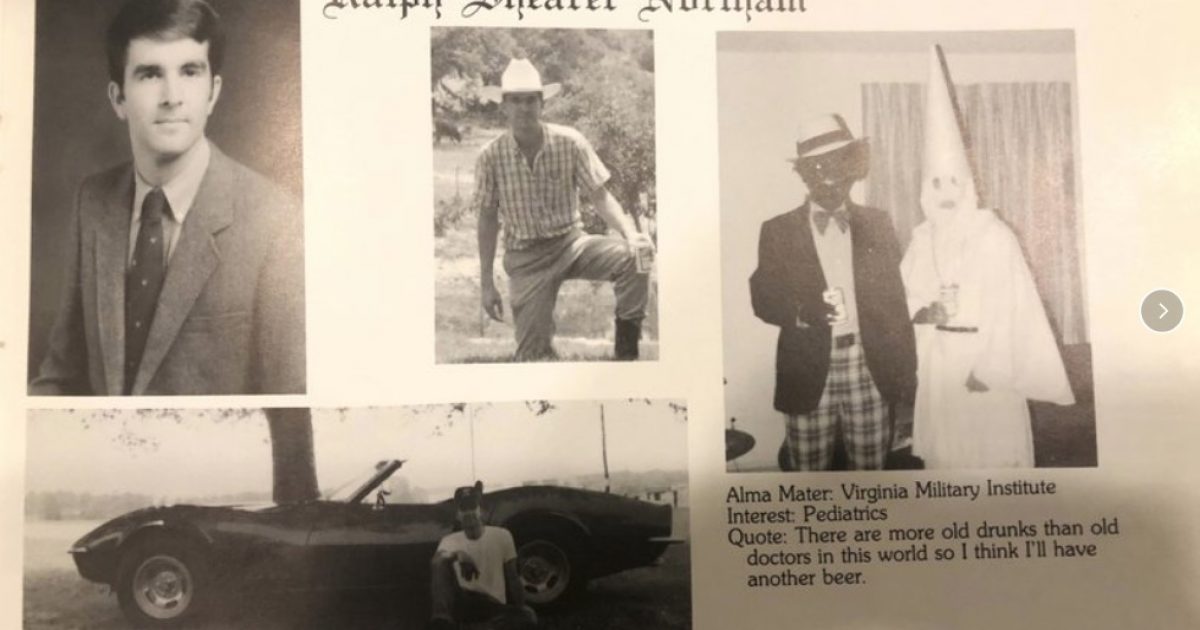 Virginia Democrat Governor Ralph Northam is under pressure to resign from office because a picture surfaced with him appearing dressed in blackface or dressed as a Ku Klux Klan member but after apologizing, it’s reported he doesn’t think he was in the disturbing yearbook photo.

Their calls for Northam to step down came in a wave late Friday, after the Democrat had apologized for appearing in a photo in which one person is dressed in blackface and another is wearing a full Ku Klux Klan uniform. The photo appeared in his 1984 medical school yearbook.

The yearbook images were first published Friday afternoon by the conservative news outlet Big League Politics. The Virginian-Pilot later obtained a copy from Eastern Virginia Medical School, which Northam attended. The photo shows two people looking at the camera — one in blackface wearing a hat, bow tie and plaid pants; the other in a full Ku Klux Klan robe.

An Associated Press reporter saw the yearbook page and confirmed its authenticity at the medical school.

My fellow Virginians, earlier today I released a statement apologizing for behavior in my past that falls far short of the standard you set for me when you elected me to be your governor. I believe you deserve to hear directly from me. pic.twitter.com/1rSw1oxfrX

But according to one source close to Northam, the governor now feels he was not in the picture.

A Virginia Democrat who has spoken with Gov. Ralph Northam has told The Associated Press that the governor now does not believe he was in a racist picture in his 1984 medical yearbook and has no immediate plans to resign.

The Democrat was not authorized to speak on the record to detail a private conversation.

Northam is calling state lawmakers Saturday to try and gain support so he can remain in office, the Democrat said.

To say it’s been a bad week for Northam is an understatement.  Earlier in the week, Northam made comments on a radio show where he supported abortion in the fourth term.

The Washington Post summarised Northam’s controversies in a video:

An apology from Northam is not enough – he must resign as Virginia’s governor.