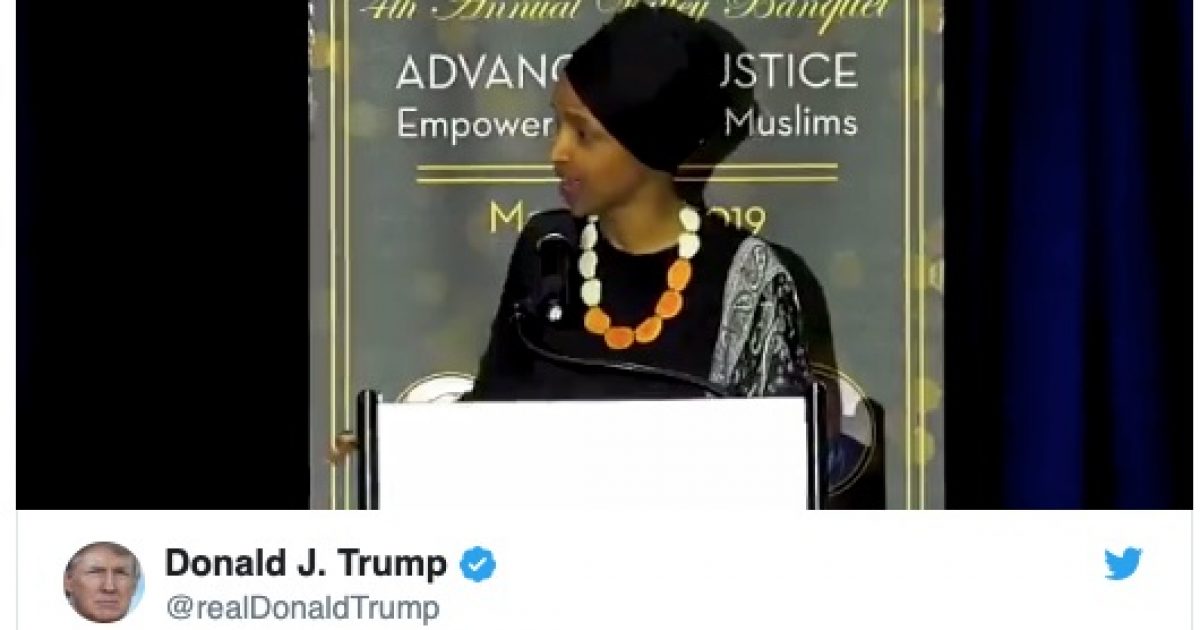 Democrats are rallying behind Minnesota Democrat Representative Ilhan Omar after President Trump responded to her comments in a Tweet about the terrorist attack on September 11, 2001.

During a speech last month at a Council on American-Islamic Relations (CAIR) fundraiser, Omar tied the founding of the organization as a reaction to the 9/11 attack “because they recognized that some people did something and that all of us were starting to lose access to our civil liberties.”

Omar’s “some people did something” remark failed to acknowledge 9/11 was a terrorist attack carried out by Muslims. Also, as a factual matter, CAIR was founded in 1994.

President Trump responded to Omar in a Tweet with a one-line comment, “WE WILL NEVER FORGET!” and an accompanying video that starts with Omar’s comments followed by video clips of the 9/11 attack.

WE WILL NEVER FORGET! pic.twitter.com/VxrGFRFeJM

The anti-Trump media and many Democrats, including 2020 presidential candidate Massachusetts Senator Elizabeth Warren, slammed the president claiming the Tweet will incite violence against Omar.

The President is inciting violence against a sitting Congresswoman—and an entire group of Americans based on their religion. It's disgusting. It's shameful. And any elected leader who refuses to condemn it shares responsibility for it.

Warren, along with other 2020 presidential candidates, including Bernie Sanders (I-VT) and Beto O’Rourke (D-TX), also made comments.

Members of Congress have a duty to respond to the President’s explicit attack today.@IlhanMN’s life is in danger. For our colleagues to be silent is to be complicit in the outright, dangerous targeting of a member of Congress.

We must speak out.

The memory of 9/11 is sacred ground, and any discussion of it must be done with reverence. The President shouldn’t use the painful images of 9/11 for a political attack.

The Washington Post fact checker analysis concluded: “We will leave it to readers to determine whether Omar should have referred to ‘terrorists’ or if the context for ‘some people’ is clear from the speech.”

Democrats, including many of the presidential hopefuls, came out in full force to defend Rep.Ilhan Omar and blast President Trump after he tweeted (and then pinned) a graphic and severely misleading video that spliced images of the September 11 attacks and a few words uttered by the freshman lawmaker in a speech.

First Member of Congress to ever describe terrorists who killed thousands of Americans on 9/11 as “some people who did something”.

Democrats are trying to spin Omar’s failure to call out Muslim terrorists in the 9/11 attack by making her the victim.