The U.S. Customs and Border Protection reported nearly 100,000 individuals were caught trying to illegally enter the U.S. at the southern border in April.

Last month, 98,977 individuals were caught between the ports of entry including 31,606 that were single adults.

In addition to those caught sneaking into the U.S., another 10,167 individuals tried to enter the U.S. at the ports of entry but were rejected. 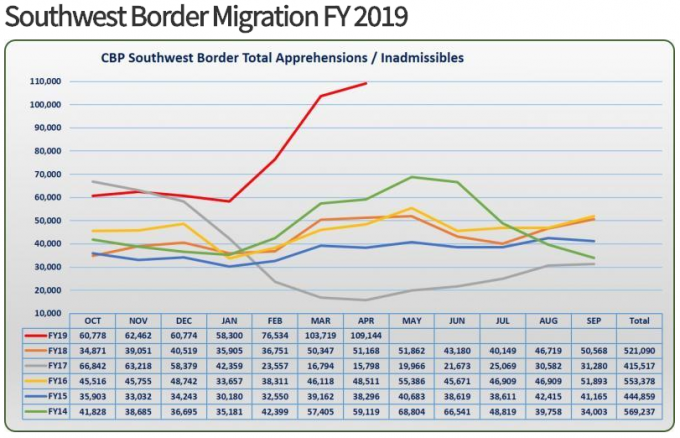 The number of illegal aliens entering the U.S. is overwhelming the ability of federal officials to deal with the surge resulting in the release of these individuals in cities across the country.

The Washington Times reports about 168,000 illegal aliens were released in the fiscal year 2019.

ICE has already released 168,000 illegal immigrant family members into the U.S. this fiscal year, and the number is likely to surge as the border situation deteriorates, a top deportation official told Congress on Wednesday.

The story adds almost 90 percent of those released do not show up at court hearings.

U.S. Customs and Border Protection in Arizona caught over a 1,000 people in three days.

#YumaSector Border Patrol continues to be overwhelmed with waves of Central American families crossing illegally and surrendering, with over 1100 apprehensions in the past 3 days in Yuma. @CBP #NationalSecurity pic.twitter.com/IjaFm6T28f

The surge of illegal aliens entering the U.S. continues especially in areas without a border wall and Democrats refuse to address border security.