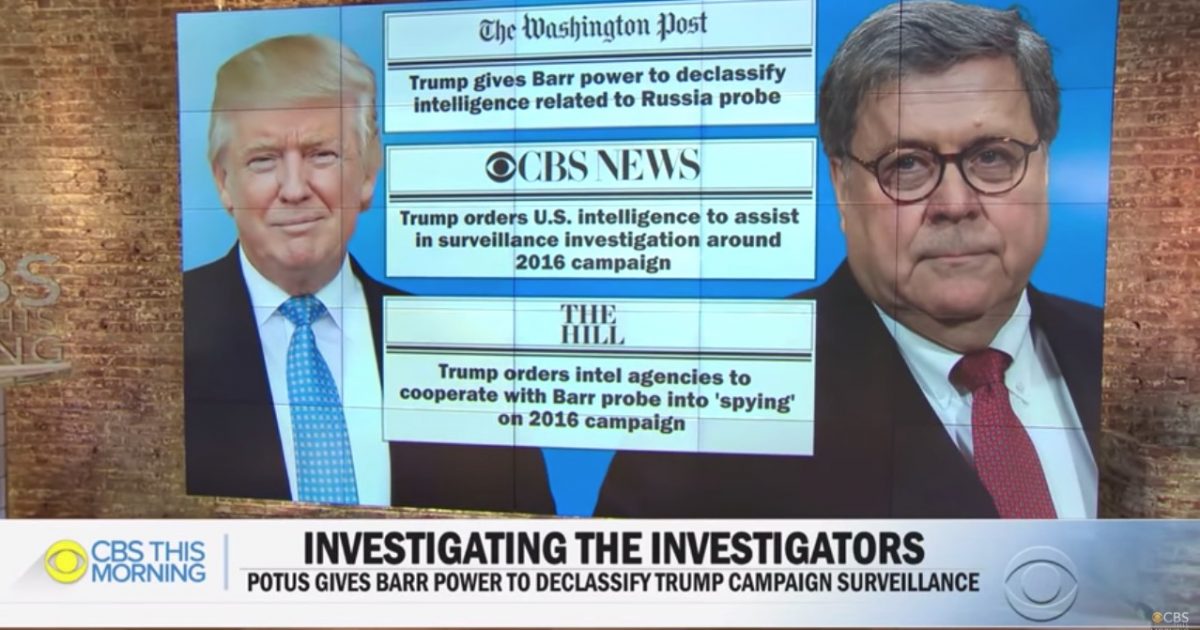 President Trump gave Attorney General William Barr the authority to declassify documents from the government’s intelligence community to determine the way they investigated connections between his campaign and Russia.

“Today, at the request and recommendation of the Attorney General of the United States, President Donald J. Trump directed the intelligence community to quickly and fully cooperate with the Attorney General’s investigation into surveillance activities….

Since special counsel Robert Mueller did not find President Trump or his campaign worked with Russia to affect the 2016 presidential election, the tables are being turned with an investigation of the investigators.

Barr told Fox News he wants to find out if the investigation of the Trump campaign was rooted in an abuse of power by government personnel.

In an exclusive interview with Fox News, Attorney General William Barr explained that he is trying to get to the bottom of whether or not “government officials abused their power and put their thumb on the scale” during the early stages of the Russia probe. “I’ve been trying to get answers to the questions and I’ve found that a lot of the answers have been inadequate and some of the explanations I’ve gotten don’t hang together. In a sense I have more questions today than when I first started,” Barr told Fox News’ Bill Hemmer in an interview set to air Friday on “America’s Newsroom.”

Barr previously testified in Congress that he felt the Trump campaign was being spied on by government officials and he wanted to determine if the spying was warranted and if it was conducted legally.

The President @realDonaldTrump made a wise decision to let AG Barr on the docunents. I don’t know for sure but I seriously doubt there’s any national security concern but some of it could affect pending investigations. I’m sure AG and DOJ will make a very appropriate decision.

While Trump stonewalls the public from learning the truth about his obstruction of justice,

Trump and Barr conspire to weaponize law enforcement and classified information against their political enemies.

The coverup has entered a new and dangerous phase.

The declassification order by President Trump will allow Barr to conduct a thorough investigation of the actions taken by government officials that looked into the president’s campaign to determine if the investigation was legal or politically motivated.

There are way too many questions about the conduct of high ranking officials at the CIA and FBI with regard to the way they investigated President Trump and his campaign. It’s crucial to find out what happened and hold people accountable if laws were broken.