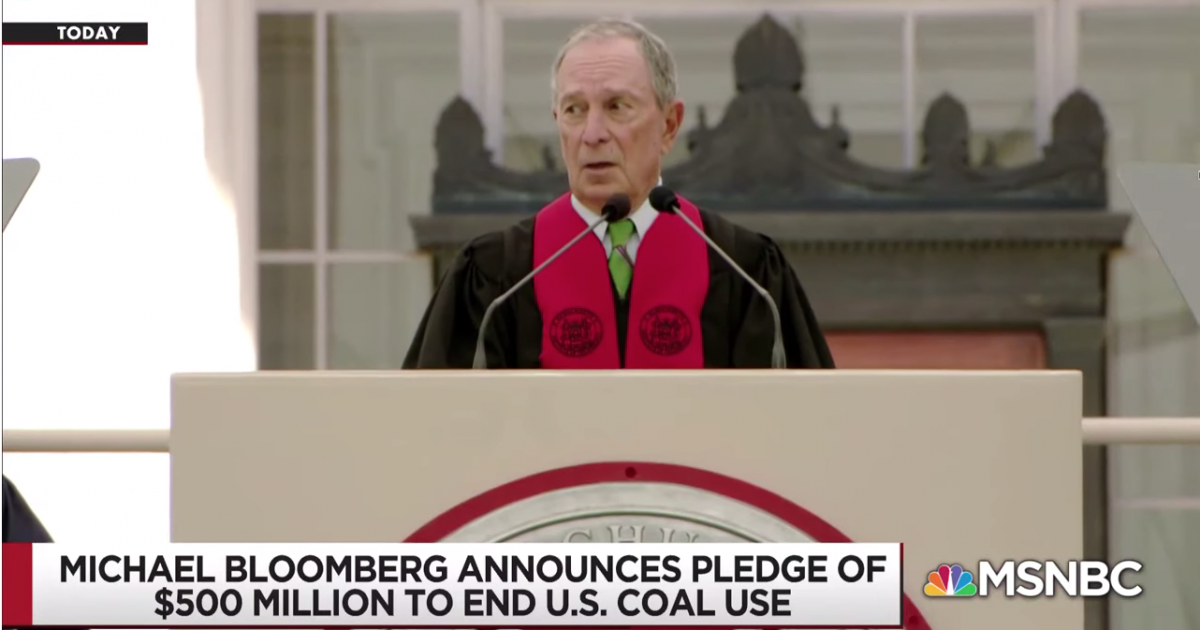 Former New York City Mayor Michael Bloomberg launched a $500 million effort to ban coal-generated electricity by 2030 as part of the goal to make a totally clean energy economy in the U.S.

Bloomberg announced his aggressive effort to combat climate change in his commencement speech at MIT.

During his speech, Bloomberg called climate change, “…our most important and pressing mission,” and that the goal of the graduates and their generation “…is to save our own planet, the one that we’re living on, from climate change.”

Then, Bloomberg put his money behind his mouth and announced his financial commitment through his nonprofit foundation Bloomberg Philanthropies.

So today, I’m happy to announce that, with our foundation, I am committing $500 million to the launch of a new national climate initiative, and I hope that you will all become part of it. We are calling it Beyond Carbon. The last one was Beyond Coal, this is Beyond Carbon because we have greater goals.

Bloomberg said his effort of closing down coal plants will work because of his prior work with the Sierra Club.

Through a partnership between Bloomberg Philanthropies and the Sierra Club, we’ve shut down 289 coal-fired power plants since 2011, and that includes 51 that we have retired since the 2016 presidential election despite all the bluster from the White House.

West Virginia Democratic Senator Joe Manchin slammed Bloomberg’s climate change agenda because of the adverse consequences of banning coal plants would have on the state he represents.

This pledge to shut down U.S. coal plants by 2030 will only serve to hurt coal miners and their families, as well as further devastate West Virginia communities that are suffering from the downturn in coal production and does nothing to address the global nature of the climate crisis.

West Virginia cannot afford Bloomberg’s “Beyond Carbon Initiative” attack on us. His end goal is to extinguish fossil fuels. And if that happens, we’re back in the dark ages. https://t.co/AbM1p1Wl3C pic.twitter.com/uKEF3jMOjZ

Bloomberg is using his vast wealth to put coal miners out of work.

If Bloomberg wants a clean energy economy, he should invest his money in alternative energy to see if it works before launching an effort to remove a cheap and reliable source of electricity.