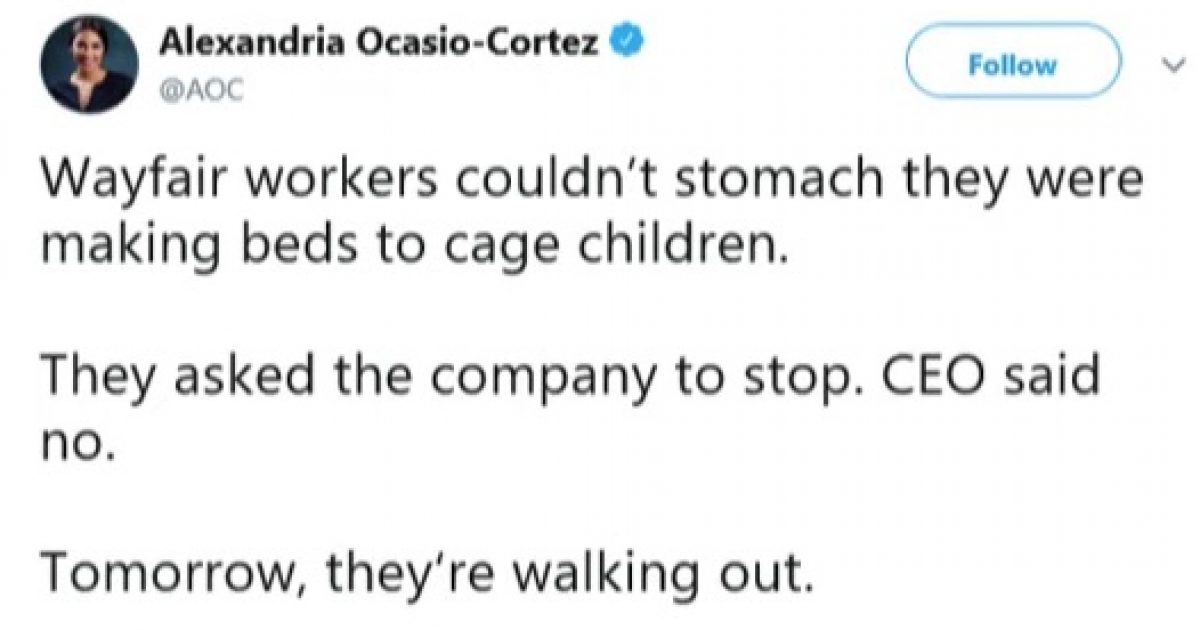 Social activism over the crisis at the U.S.-Mexico southern border is hitting corporate America.

Word of the bedroom furniture purchase made the news when a receipt of purchase was leaked.

Online home goods retailer Wayfair sold roughly 1,600 mattresses and 100 bunk beds to Baptist Child and Family Services, a nonprofit that works as a federal contractor managing some of the camps along the southern border, according to a copy of the sales receipt obtained by CNBC and verified by an employee.

Over 500 employees signed a letter to the CEO demanding the halt of the furniture sales.

Hundreds of employees and social activists participated in the protest in Boston’s Copley Square.

At 1:30 p.m., tomorrow, we're asking employees to leave their desks and walk to Copley Square to show our numbers and make this demand. #wayfairwalkout

New York Democrat Representative Alexandria Ocasio-Cortez backed the employees and Tweeted her support of the walkout.

They asked the company to stop. CEO said no.

This is what solidarity looks like – a reminder that everyday people have real power, as long as we’re brave enough to use it. https://t.co/667abeLDTG

Management at Wayfair pushed back on their employee’s demands.

Wayfair’s leaders defended the contract in a letter on Monday evening and said it was the company’s business to sell to any customer who was acting within the law. They added, “No matter how strongly any one of us feels about an issue, it is important to keep in mind that not all employees or customers agree.”

The company also tried to appease their employees by making a $100,000 donation to The American Red Cross, however, in the wake of Wayfair’s decision, the company might face consumer boycotts.