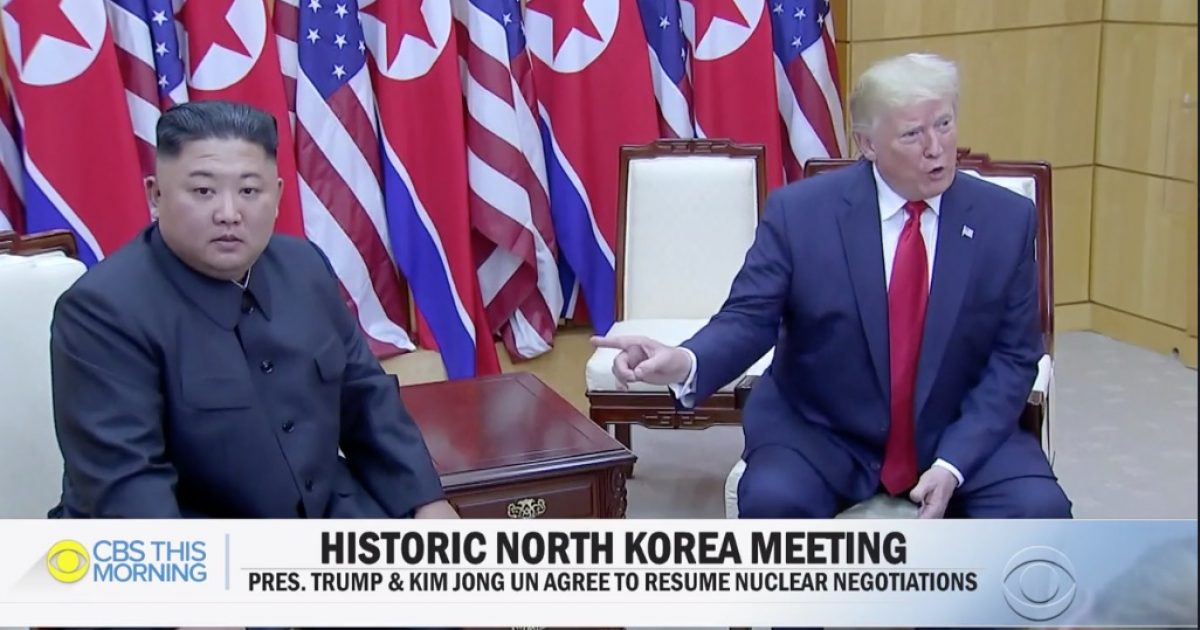 The meeting occurred at the demilitarized zone that divides North Korea from South Korea.

The impromptu meeting ignited stalled talks about North Korea’s nuclear weapons program. The last meeting between the two leaders in Vietnam failed to advance an agreement for North Korea to denuclearize their nation.

Democrats blasted the president for meeting with Kim Jung-un.

Former Vice President Joe Biden’s campaign issued a statement accusing the president of “…coddling of dictators at the expense of the American national security.”

? NEW: @JoeBiden campaign statement on @realDonaldTrump's "coddling of dictators at the expense of American national security and interests," including fawning over Kim Jong-un and joking "with Vladimir Putin about our election security and 'getting rid' of journalists." pic.twitter.com/nTRIYx7aSz

Our President shouldn’t be squandering American influence on photo ops and exchanging love letters with a ruthless dictator. Instead, we should be dealing with North Korea through principled diplomacy that promotes US security, defends our allies, and upholds human rights. https://t.co/9ROpNfjYbY

“[T]his was the dramatic headline, the dramatic photo that the President wanted. He’s a great showman. He pulled it off. There’s just no question about that,” proclaimed ABC chief anchor and Clinton lackey George Stephanopoulos.

There was an echo on NBC were host Willie Geist asked political director Chuck Todd: “Is there a plan from the Trump administration or was it a photo op?” Todd hinted at it being just that, noting: “The last two ended up looking as if they were photo ops in the end. We thought they could lead to something, but they didn’t.”

President Trump inherited a mess with North Korea and he is taking unprecedented steps to address the matter.

The previous president’s failed to effectively deal with the growing threat posed by North Korea’s nuclear weapons program and now President Trump is trying to solve the problem.

Despite his efforts to make it a safer world, President Trump’s political and media critics remain in attack mode.