Former Vice President and Democrat 2020 presidential candidate Joe Biden is trying to repair the damage he inflicted upon himself from the first Democratic debate.

Biden’s inability to mount an effective response to Senator Kamala Harris (D-CA) challenging his anti-busing record as a Senator, a highlight of the debate, is tied to his significant drop in his poll numbers.

A chart by Real Clear Politics shows a rise in poll numbers for Harris came at the expense of Biden. 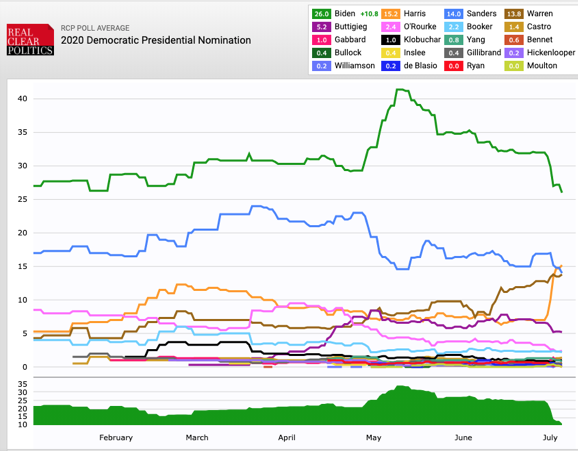 Now Biden is trying to get his campaign back on track by apologizing and distancing himself from Democrat segregationist Senators he fondly referred to at a fundraiser.

“Everything they stood for offended me. They represented everything that I ran against.” Biden said in Sumter, S.C.

“The one thing you cannot say about Joe is that he’s a racist,” Biden told CNN’s Chris Cuomo, sitting beside her husband. “He got into politics because of his commitment to civil rights, and then to be elected with Barack Obama.”

Biden is also trying to repair the damage of his debate performance by admitting he wasn’t prepared enough for the debate.

Looks like Biden’s damage control efforts are not being embraced.

Jones criticized Biden’s CNN interview with Cuomo, saying, “This guy doesn’t look like, at least tonight, like he’s ready to go head to head with Donald Trump or really with anybody.”

Perhaps even more problematic for Biden is former First Lady Michelle Obama declined to support the former Vice President in front of a black audience at the 25th Anniversary Essence Festival in New Orleans, Louisiana.

Obama was asked by event moderator CBS This Morning co-cost Gayle King if she wanted to comment about the exchange between Biden and Harris and Obama replied “I do not. I’ve been doing this rodeo far too long, and no comments.”

Biden’s anti-busing record is going to be a problem that Harris and others will exploit during the Democratic primary.