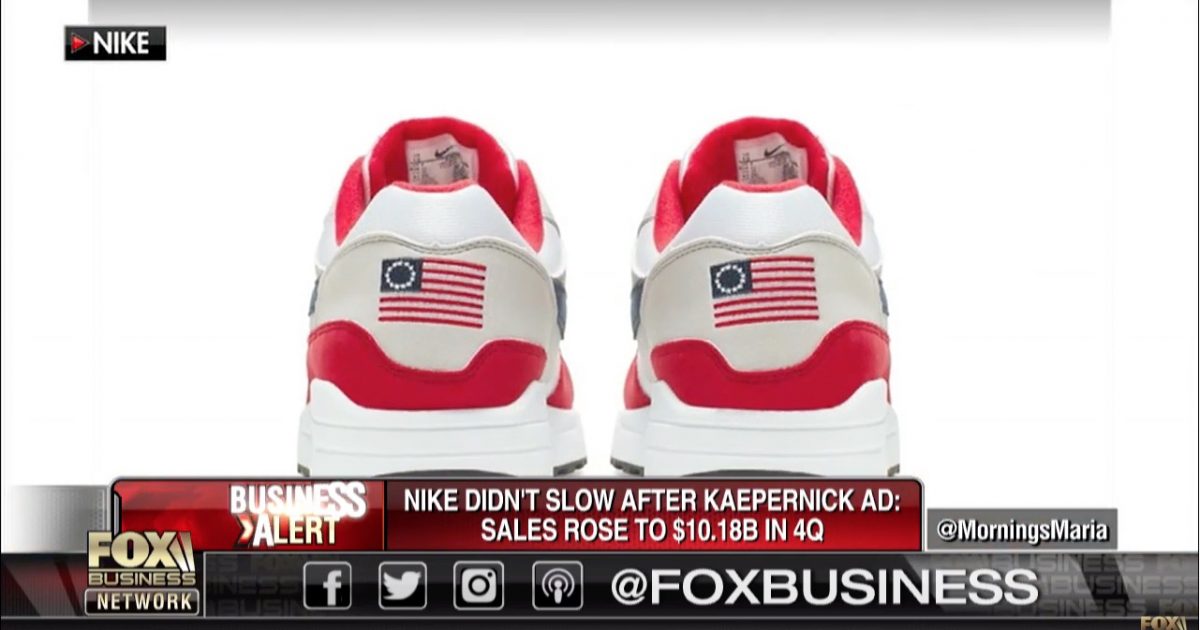 Nike pulled a “Betsy Ross Flag” themed sneaker from retailers because former NFL quarterback Colin Kaepernick told the company it was offensive, according to The Wall Street Journal.

The story claims Kaepernick approached the company expressing thoughts that “…he and others felt the Betsy Ross flag is an offensive symbol because of its connection to an era of slavery.”

A Nike spokesperson said, “Nike has chosen not to release the Air Max 1 Quick Strike Fourth of July as it featured the old version of the American flag.”

Kaepernick ignited protests during the National Anthem at NFL games in 2016 which spread to other sporting events and despite the controversy, Nike chose Kaepernick to promote the company’s 30th anniversary of its famous “Just Do It” advertising campaign.

Believe in something, even if it means sacrificing everything. #JustDoIt pic.twitter.com/SRWkMIDdaO

Fox Business Network’s “Mornings with Maria” reported on Nike pulling the sneaker out of circulation.

Nike got significant pushback following news reports about the decision not to sell the “Betsy Ross Flag” themed sneaker.

It’s a good thing @Nike only wants to sell sneakers to people who hate the American flag…. @NFL #HappyFourth https://t.co/G6w8vDjvLP

Arizona Republican Governor Doug Ducey is eliminating tax incentives for a Nike facility in the state.

Nike has made its decision, and now we’re making ours. I’ve ordered the Arizona Commerce Authority to withdraw all financial incentive dollars under their discretion that the State was providing for the company to locate here. 7/

It’s outrageous a social activist can persuade Nike, an American multinational company worth billions of dollars, to pull a sneaker from the marketplace.