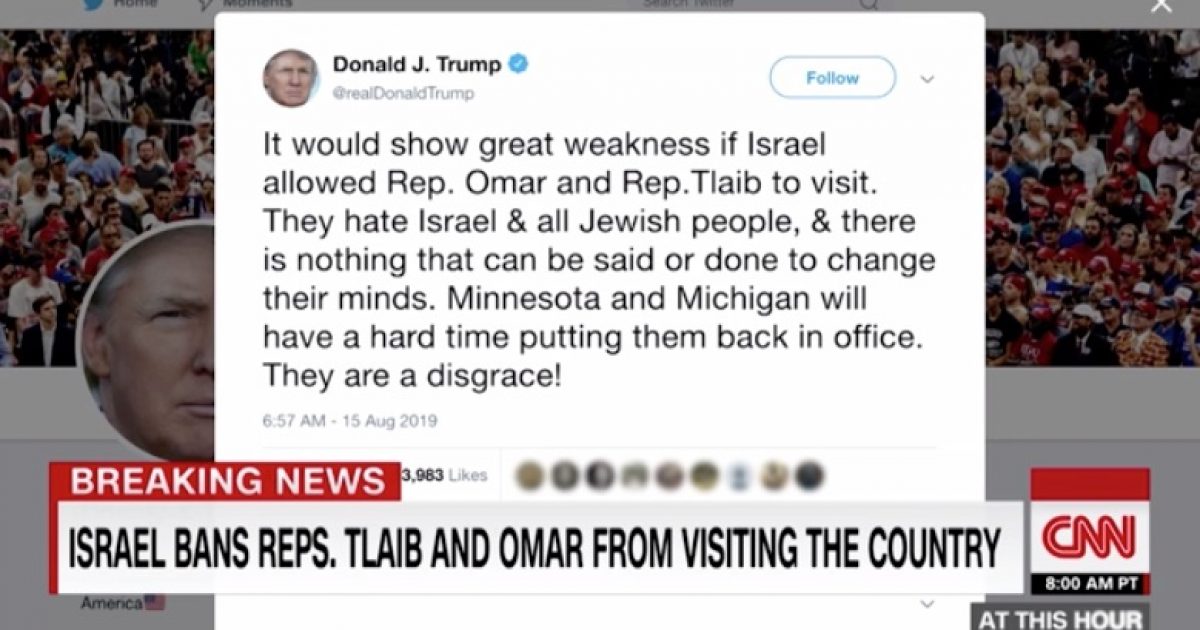 Democrat Representatives Ilhan Omar from Minnesota and Rashida Tlaib from Michigan were denied entry into Israel following President Trump’s Tweet urging the country not to allow them in.

According to Axios, the president wanted Israel to use the Representative’s support of a boycott of the country as justification for denying them entry.

Both Omar and Tlaib support the BDS movement which stands for Boycott, Divestment and Sanctions against Israel.

It would show great weakness if Israel allowed Rep. Omar and Rep.Tlaib to visit. They hate Israel & all Jewish people, & there is nothing that can be said or done to change their minds. Minnesota and Michigan will have a hard time putting them back in office. They are a disgrace!

Omar was outraged she was denied entry into Israel and blamed President Trump for pushing Netanyahu to deny their entry into the country.

It is an affront that Israeli Prime Minister Netanyahu, under pressure from President Trump, would deny entry to representatives of the U.S. government.

In addition to both Omar and Tlaib being big critics of Israel, not allowing the Representives into the country is justified because Israel has a law on the books that prevents visitors who support the BDS movement.

Democratic Majority for Israel, a lobbying group, issued a statement critical of the Israeli government.

Israel is most certainly justified in denying Omar and Tlaib entry into the country. Both Representatives are clearly anti-Israel as their support of the BDS movement proves as well as their anti-Semitic comments.

CNN reported on the decision by Israel.

Moreover, given their anti-Israel views, chances are Omar and Tlaib would have used the trip as a public relations stunt to slam Israel.