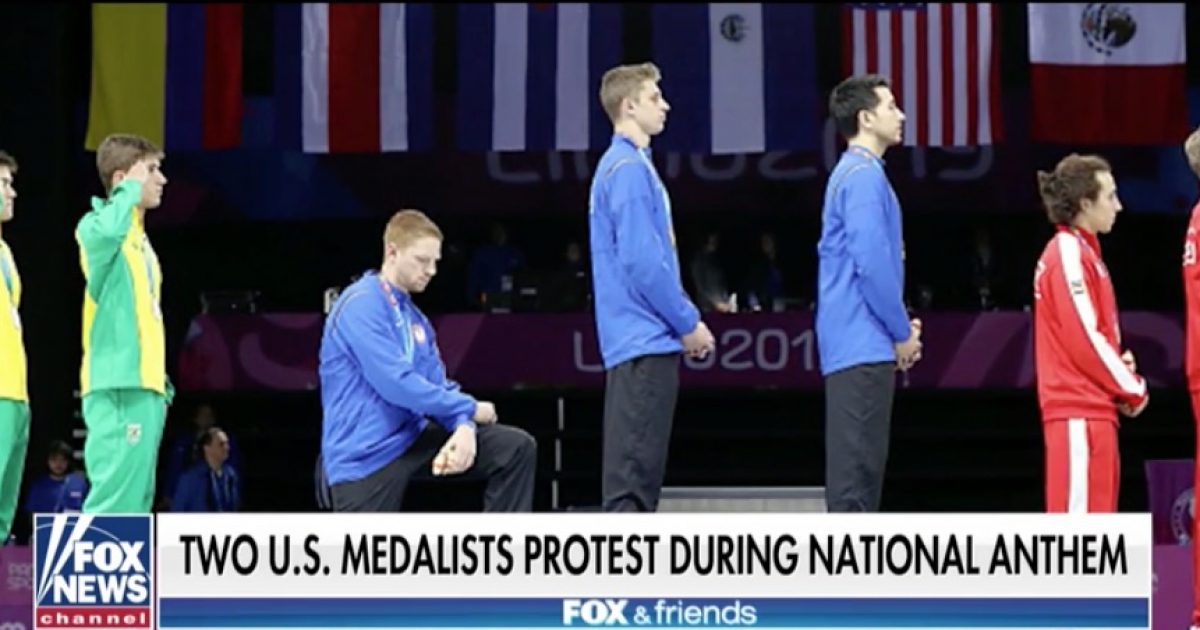 Fencing champion Race Imboden is in the headlines and not just for winning a gold medal along with his fencing teammates at the Pan American Games in Lima, Peru.

During the National Anthem ceremony, Imboden took a knee and defended his protest claiming it was over America’s “multiple shortcomings.”

Imboden used Twitter to explain his feelings that his pride in America has been “cut short,” adding he was “sacrificing” his spotlight opportunity all while slamming President Trump because he “spreads hate.”

and a president who spreads hate are at the top of a long list.
I chose to sacrifie my moment today at the top of the podium to call attention to issues that I believe need to be addressed. I encourage others to please use your platforms for empowerment and change.

Imboden also expressed his views during a TV interview.

Texas Republican Representative Dan Crenshaw, a former Navy Seal who lost an eye in an explosion while serving in Afghanistan, slammed Imboden on Twitter calling him “delusional.”

If you think this is “sacrifice”, you are delusional.

All you’ve done is haphazardly denounced the entirety of our country because of its imperfections.

You and your fellow athletes have only succeeded in politicizing one of the few things that still unite us: sports. https://t.co/Wpi9qdlQo3

According to the U.S. Olympic and Paralympic Committee, Imboden may face disciplinary action for his antics.

“We respect his rights to express his viewpoints, but we are disappointed that he chose not to honor his commitment,” the group said. “Our leadership are reviewing what consequences may result.”

Unfortunately, Imboden, who was rewarded for his skills doing what he loves, highjacked a celebratory moment to make a personal political statement on the world’s stage.