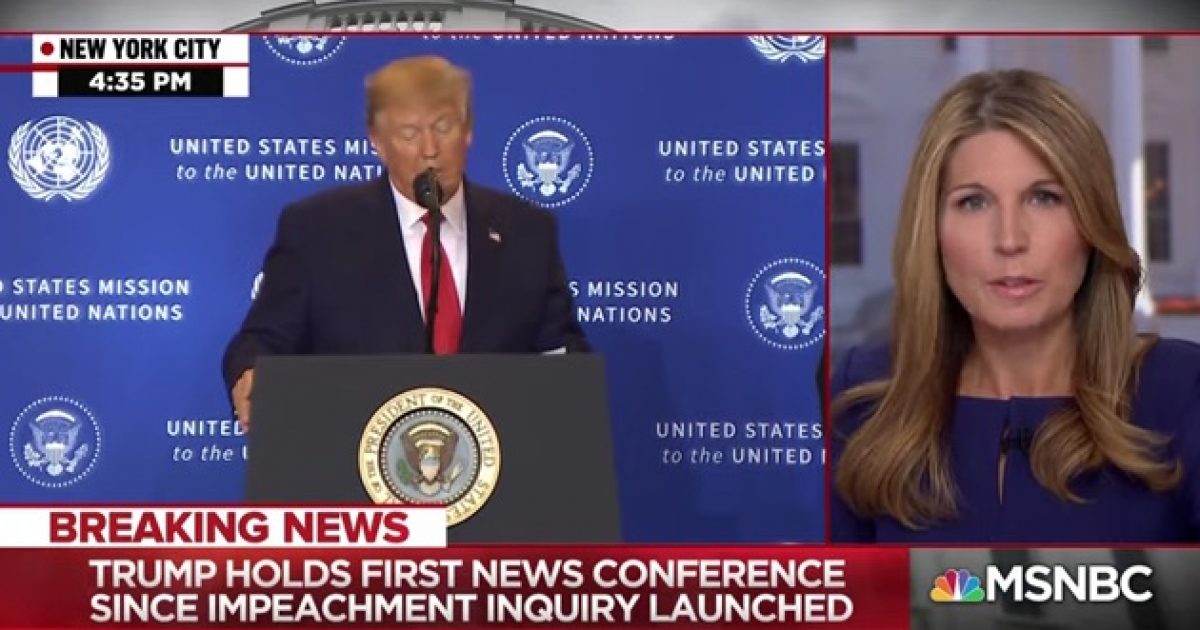 The anti-Trump media is all in to discredit President Trump and are backing Democrats over the impeachment process.

Democrats are outraged over a whistleblower complaint alleging a “promise” made by President Trump to a foreign national leader in a phone conversation, prompting calls for President Trump’s impeachment.

The times have found us. The actions taken to date by the President have seriously violated the Constitution. It is for this reason that the House of Representatives is moving forward with an official impeachment inquiry. pic.twitter.com/cHq7zgKJ1g

The release of the phone transcript between President Trump and Ukrainian President Volodymyr Zelensky didn’t satisfy the anti-Trump media.

Multiple outlets chopped up the transcript of President Donald Trump speaking with Ukrainian President Volodymyr Zelensky, making it seem as though Trump was asking for an investigation into former Vice President Joe Biden’s son.

National Press Secretary for President Trump’s 2020 presidential campaign Kayleigh McEnany called out the anti-Trump media for not reporting the facts.

The fake news media is LYING to you about @realDonaldTrump – watch @TeamTrump expose them with the FACTS!

SHARE this with everyone you know because the media is committing malpractice in deleting 500 words from a transcript… pic.twitter.com/cvFpZf093y

President Trump held a news conference Wednesday in response to Pelosi’s announcement of a formal impeachment inquiry regarding his phone call with the president of Ukraine.

During President Trump’s televised news conference, MSNBC host Nicolle Wallace interrupted the live news event saying, “We hate to do this, really, but the President isn’t telling the truth.”

Because of course, MSNBC's Nicolle Wallace skipped over HUNDREDS of words to smear President Trump.

According to the transcript, the "favor" was about the 2016 election, not about Biden. pic.twitter.com/8FTZuQj3gM

The agenda-driven media is in full swing pushing propaganda to discredit President Trump and distract Americans from the truth.