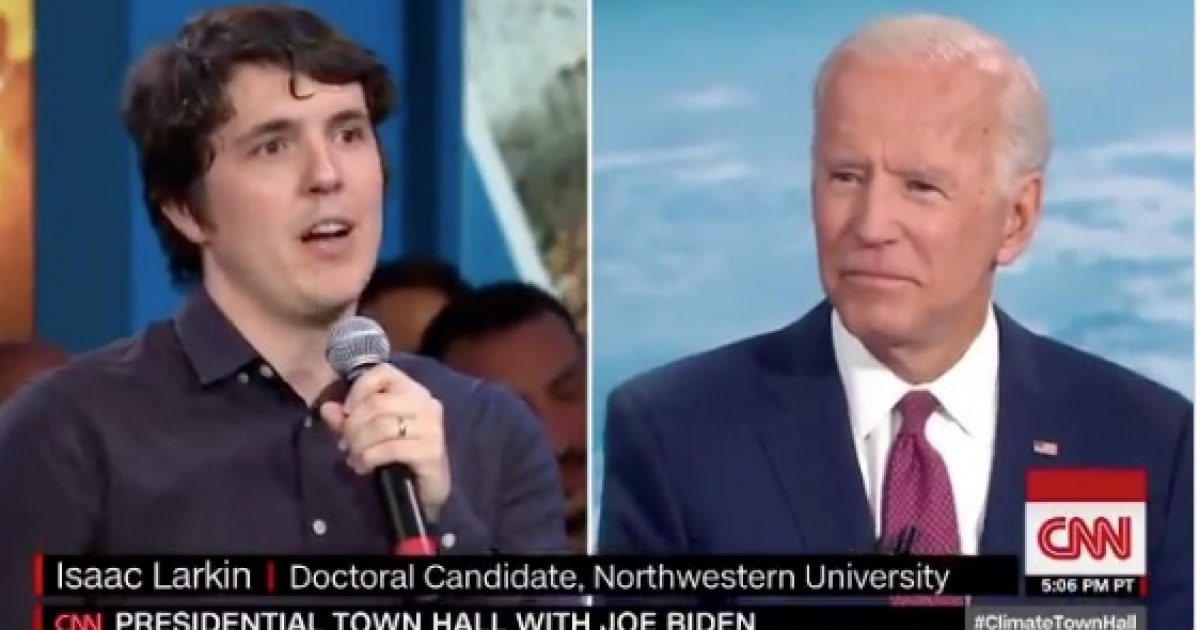 A Northwestern University doctoral student questioned Biden’s commitment on climate change because he was seeking campaign money from a fossil fuel executive.

The student Isaac Larkin, asked Biden, “How can we trust you to hold these corporations accountable when you are holding a high-dollar fundraiser held by Andrew Goldman, a fossil fuel executive?”

Joe Biden says he might reconsider a fundraiser scheduled for Thursday after being confronted and told about its host’s connections to the energy industry #ClimateTownHall https://t.co/VDehXzZTW9 pic.twitter.com/6DhMi8wwed

CNN host Anderson Cooper asked a follow-up question, “…if you’re going to a fundraiser given in part by this company that is pulling up natural gas, are you the right guy?”

Biden denied he was aware that Goldman was a fossil fuel executive because his name didn’t appear on the company’s SEC filing.

Previously, Biden promised he would not accept campaign money from fossil fuel interests.

People for Bernie exposed Biden for misleading the public because they found and Tweeted public information about the company, Western LNG, with Goldman’s name listed as a co-founder of the company.

"However, it just so happens that in a 2018 filing in Canada, Goldman is described as part of the company’s senior management team. “He is a long-term investor in the liquefied natural gas sector,” the filing offers helpfully."https://t.co/rQ9nX7MJQM

Biden’s campaign defended him claiming Goldman is not really an executive with Western LNG.

What @andersoncooper just said about VP Biden's fundraiser is factually incorrect. Andrew Goldman isn't a fossil fuel executive. He's not involved in the day to day operation. He's not on the board of the company, nor the board of the portfolio company.

David Turnbull, an activist who supports the “No Fossil Fuel Pledge,” challenged Biden.

At #ClimateTownHall @JoeBiden just talked about looking at the SEC filings of Western LNG to provide him cover on the #NoFossilFuelMoney pledge for a controversial fundraiser tomorrow. Let's break down what he's talking about… https://t.co/mOQFrICgYm

The drama with Biden over accepting a fundraiser from a person with a fossil fuel business interest shows the environmental activists are aiming to take down the former vice president’s presidential campaign.