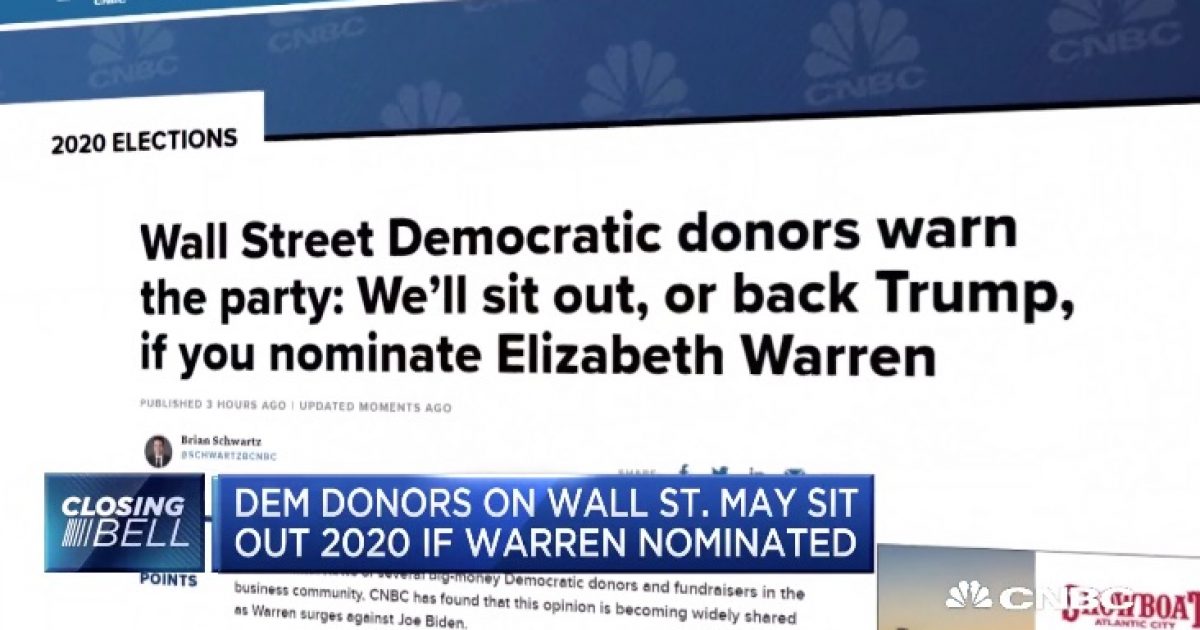 Warren, a huge critic of corporations, big banks, and the wealthy, is pushing for a wealth tax if she becomes the Democrat party’s nominee.

Senator Warren’s proposal would hit fortunes above $50 million with a 2 percent annual wealth tax. Fortunes above $1 billion would be taxed annually at 3 percent.

However, big-money Democrat Wall Street donors are not all in with Warren’s wealth tax idea intended to pay for her big government policies.

CNBC talked with wealthy Democrat donors and fundraisers to get their thoughts on Warren’s wealth tax with some saying they will “sit out” or “back President Donald Trump.”

Democratic donors on Wall Street and in big business are preparing to sit out the presidential campaign fundraising cycle — or even back President Donald Trump — if Sen. Elizabeth Warren wins the party’s nomination.

Wall Street Democratic donors warn the party: We'll sit out, or back Trump, if you nominate Elizabeth Warren https://t.co/DdAeRa1uea

I'm fighting for an economy and a government that works for all of us, not just the wealthy and well-connected. I'm not afraid of anonymous quotes, and wealthy donors don't get to buy this process. I won't back down from fighting for the big, structural change we need. https://t.co/nx7GczQhHl

Wall Street executives are fearful of an Elizabeth Warren presidency, according to @MadMoneyOnCNBC's @JimCramer. https://t.co/2HVoDtTE1k pic.twitter.com/iQmevX4Gxw

Warren’s wealth tax idea is a war on the wealthy and Wall Street Democratic donors and fundraisers have issued a strong warning to Warren over her tax the wealthy plan.

Punishing the wealthy is not a way to grow the economy or get elected president.