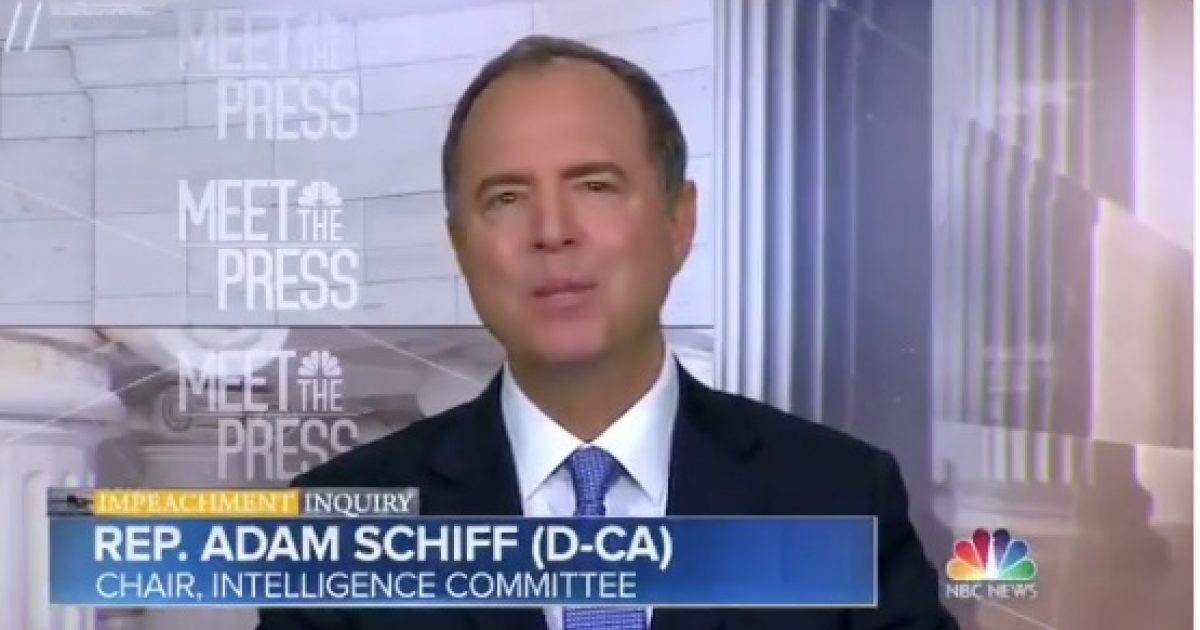 Over the weekend, House Intelligence Committee Chairman Adam Schiff (D-CA) continued to deceive and hype the whistleblower charge against President Trump over his phone conversation with Ukrainian President Volodymyr Zelensky.

Democrats are outraged about a whistleblower complaint alleging a “promise” made by President Trump to President Zelensky and are calling for Trump’s impeachment.

Acting Director of National Intelligence Joseph Maguire was called to testify last week over his handling of the whistleblower, “who alleges that President Trump used his office to solicit interference by a foreign country in the 2020 U.S. presidential campaign.”

During the hearing, Schiff gave a fictitious summary of the Ukraine phone call transcript in his opening statement.

In part, Schiff claimed President Trump said during the phone call to the Ukraine president “I have a favor I want from you” and to “make up dirt on my political opponent.”

Although the phone transcript was made public with no language of a request to “make up dirt” on Biden, Schiff continues to push the narrative on national television.

On Sunday, Schiff appeared on ABC’s “This Week with George Stephanopoulos.” Watch the entire interview here.

We’ll conduct a complete investigation to hold this president accountable.

But what we’ve already seen in his call is damning.

Trump tried to coerce a foreign leader to make up dirt on his opponent and interfere in our election.

Violating his oath and undermining our security. pic.twitter.com/iHTXPw9zmI

We had no choice but to move forward with an impeachment inquiry,

And our focus will be on the president’s fundamental breach of his oath office.

Coercing a foreign nation to interfere in our election is never ok,

No matter what the president and his defenders say. pic.twitter.com/sYPWAL75mm

President Trump responded to the whistleblower complaint and to Schiff’s fictitious summary of the phone call.

The Fake Whistleblower complaint is not holding up. It is mostly about the call to the Ukrainian President which, in the name of transparency, I immediately released to Congress & the public. The Whistleblower knew almost nothing, its 2ND HAND description of the call is a fraud!

Rep. Adam Schiff illegally made up a FAKE & terrible statement, pretended it to be mine as the most important part of my call to the Ukrainian President, and read it aloud to Congress and the American people. It bore NO relationship to what I said on the call. Arrest for Treason?

Schiff must be held accountable for misleading the nation about the content of the phone call between President Trump and Ukrainian President Zelensky.