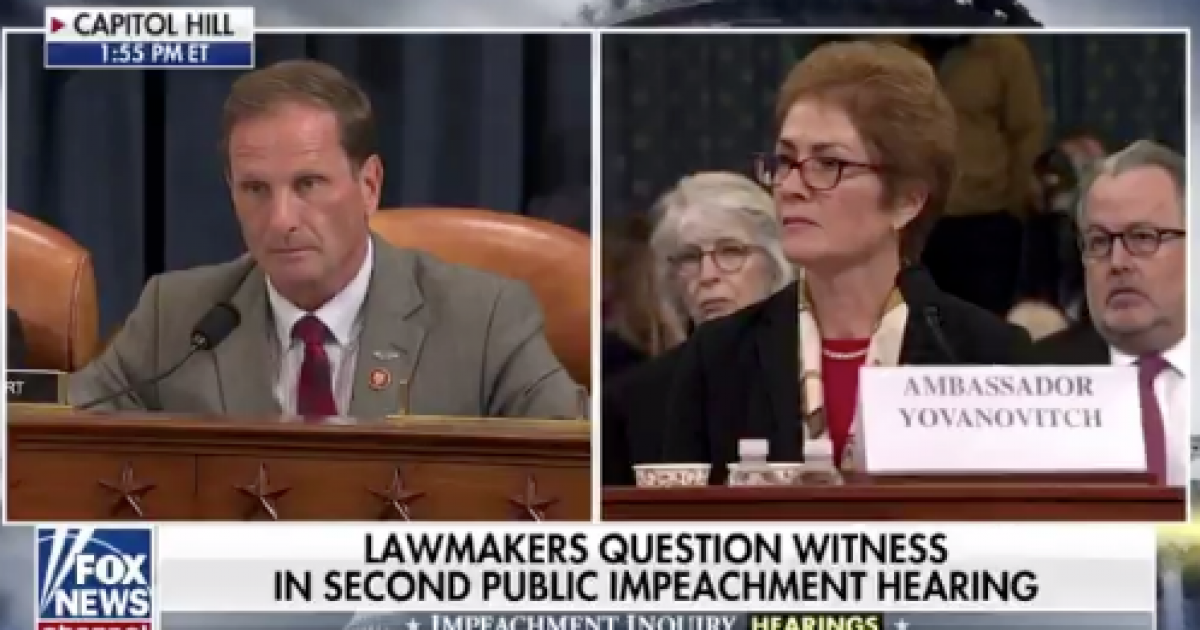 Friday was day two of the impeachment inquiry hearing of President Trump with testimony from former U.S. Ambassador to Ukraine Marie Yovanovitch.

The House Intelligence Committee kicked off its first public impeachment inquiry hearing earlier this week and before the hearing, House Intelligence Committee Chairman Adam Schiff (C-DA) put Republicans on notice the hearing will be solely focused on President Trump and Ukraine and not on former Vice President Joe Biden and his son Hunter or on Ukraine’s possible role in interfering in the 2016 election.

Democrats want to use the testimonies to build their impeachment case against President Trump in an attempt to prove the president abused his power by withholding military aid in exchange for Ukraine to investigate the Biden’s.

Following the start of the hearing on Friday, President Trump weighed in on Twitter about Ambassador Yovanovitch.

Everywhere Marie Yovanovitch went turned bad. She started off in Somalia, how did that go? Then fast forward to Ukraine, where the new Ukrainian President spoke unfavorably about her in my second phone call with him. It is a U.S. President’s absolute right to appoint ambassadors.

Democrats went after President Trump over his comments about Ambassador Yovanovitch by accusing him of “witness intimidation” during her testimony.

House Intelligence Committee Adam Schiff accused the president of witness intimidation during the hearing and read Trump’s tweet aloud to the room.

Representative Alexandria Ocasio-Cortez (D-NY) criticized and accused President Trump of “witness tampering” and said he’s “not satisfied with only one article of impeachment.”

Trump himself is clearly not satisfied with only one article of impeachment.

His choice to publicly broadcast his own, personally authored witness intimidation means he’s wants to sign up for another article on obstruction of justice, too. https://t.co/wYvH92CMHb

Once again, Adam Schiff flat out REFUSES to let duly elected Members of Congress ask questions to the witness, simply because we are Republicans. His behavior is unacceptable and he continues to abuse his Chairmanship. Watch ?? pic.twitter.com/qm9Uj8tiHO

Stefanik also mocked Schiff by reading some of his old tweets and media comments that the whistleblower would testify.

Stefanik read aloud Schiff’s tweets — as well as quotes from news reports and television appearances — where Schiff said that the whistleblower, who remains anonymous, would testify. Schiff has since denied requests for that individual to come forward, calling the potential testimony “redundant” and “unnecessary” last week.

The Democrats second day impeachment witness, Ambassador Yovanovitch, has no information on any of the relevant questions.

They have no case. This is not serious. pic.twitter.com/dHTtLAnoI5

The Dems' star witness was just asked on record if she had any information regarding @realDonaldTrump accepting any bribes or being involved in any criminal activity.

Her answer was clear: "No."

Game over. Time to end this impeachment charade. pic.twitter.com/wZwdvwuRpI