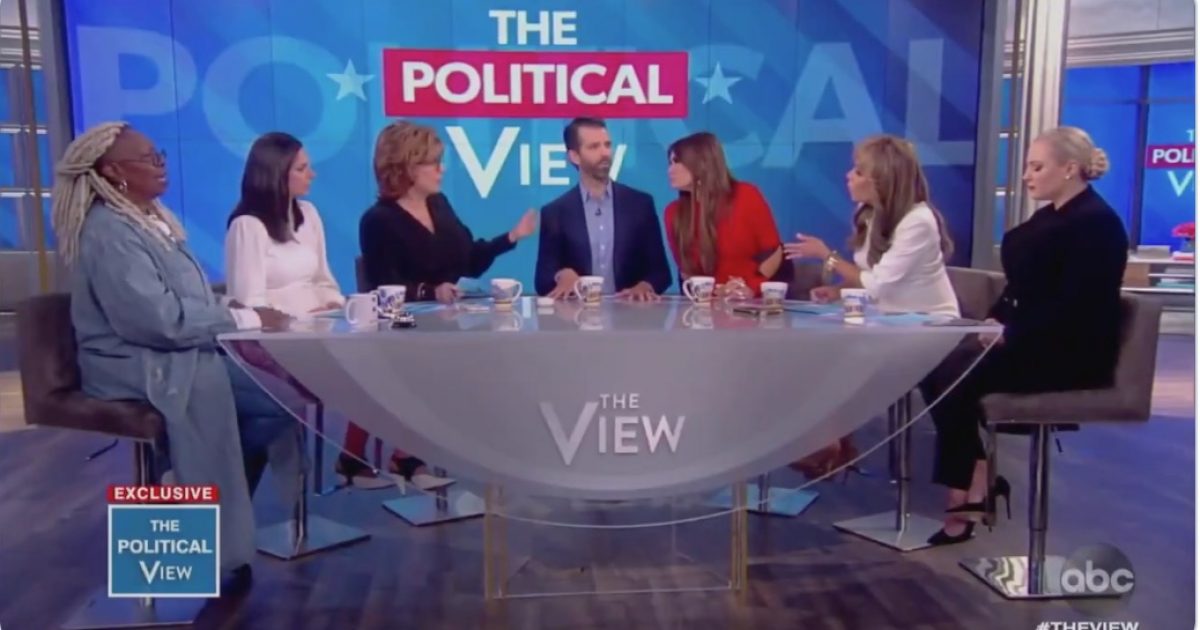 Donald Trump Jr. confronted the hosts of ABC’s “The View” by calling out their hypocrisy over race and sexual assault.

The president’s eldest son called out host Joy Behar on race by mentioning she once wore “blackface” as part of a costume and challenged host Whoopi Goldberg for playing down film director Roman Polanski’s statutory rape of a minor.

In the span of 10 seconds, @DonaldJTrumpJr called out Joy Behar for wearing blackface

A number of people on Twitter jumped on the social media platform to expose “The View” hosts for misleading their viewers.

Behar and Goldberg denied the charge by Trump Jr. that Behar wore blackface.

But the evidence from a prior episode of “The View” showed Behar dressed as an African woman and admitted she used darker makeup.

The show even ran an image of the old photo pic.twitter.com/qKQqzDPxyn

Also, Goldberg appeared at an event with her then-boyfriend Ted Danson who wore blackface.

FLASHBACK: @WhoopiGoldberg laughed while her lover @TedDanson wore blackface, used the N-word, and ate watermelon during her 1993 roast at the Friar's Club.

Roger Ebert called it "a tasteless display," and described how many left the roast in disgust. https://t.co/Tnwzekqjan pic.twitter.com/Lhh7Gev7HO

"The View" got busted in another lie after Whoopi argued with @kimguilfoyle that they weren't calling for Trump's impeachment on the first day after the election.

"There is such a thing called impeachment."pic.twitter.com/PWhf3si3ZB

Finally, Guilfoyle gave a passionate defense of the Trump family.

We had the ladies of @TheView absolutely TRIGGERED! Hah!

It was great to see Trump Jr. and Guilfoyle expose liberal hypocrisy on their own turf.

Conservatives on Twitter are using the social media platform to correct the record – a role the media abandoned.