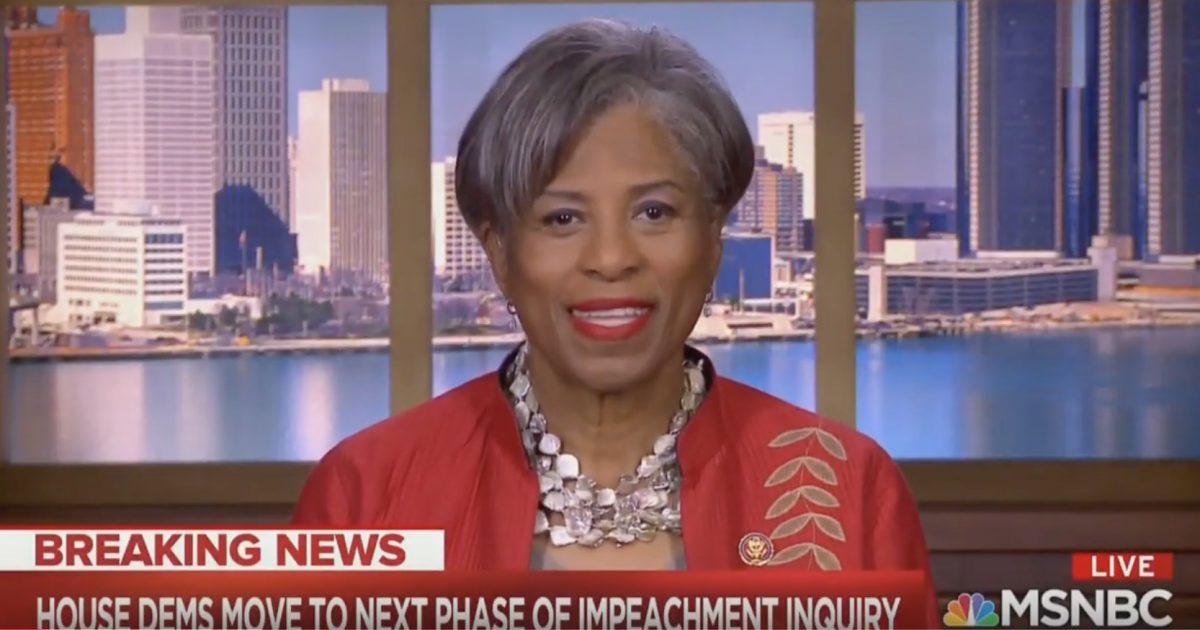 Democrat Michigan Representative Brenda Lawrence is all over the map over the impeachment of President Trump.

In October, Lawrence stood with her fellow House Democrat members to impeach the president, saying on Sirius XM radio, “…to protect the democracy of the United States of America, I cannot sit silent, that I must move forward with [impeachment] because this is egregious.”

Just last weekend, Lawrence was on “No BS News Hour with host Charlie LeDuff,” and said the complete opposite and pushed to censure President Trump instead.

“We are so close to an election. I will tell you, sitting here knowing how divided this country is, I don’t see the value of taking him out of office,” Lawrence said. “I do see the value of putting down a marker saying his behavior is not acceptable.”

But in a matter of days, Lawrence flipped yet again, telling MSNBC host Chris Jansing, “We have had a very thorough investigation, and the crimes of impeachment has been documented, and I’m moving forward with that.”

This week, Lawrence also issued a statement and tweeted she “firmly supported impeachment since early 2017.”

I have firmly supported impeachment since early 2017. President Trump has abused the power of office, betrayed the American people, and corrupted our democracy. This behavior is unacceptable and impeachment proceedings MUST continue #ForThePeople #DefendOurDemocracy pic.twitter.com/CxGluVsl8h

Considering the recent polls on impeaching President Trump, it’s not surprising Lawrence is not consistent, given the fact that voters are growing weary and are losing interest in the Democrat’s plan.

According to Fox News, “Fifty percent of independents questioned in an NPR/PBS/Marist poll conducted Nov. 11-15 did not support impeaching and removing Trump from office, with just 42 percent backing such a move.”

A Pennsylvania Democrat voter said to CNN about impeachment, “I am tired, I really am, I am tired of it all.”

Even Democrats in Pennsylvania are tired of Adam Schiff and Nancy Pelosi wasting time and taxpayer dollars on an impeachment sham!

“I am tired, I really am, I am tired of it all.” pic.twitter.com/LXuSauXVhp

On the one hand, Lawrence is watching the polls of voters losing interest over impeachment and on the other hand, she’s getting an earful from her fellow House Democrat members, resulting in her caving to pressure.