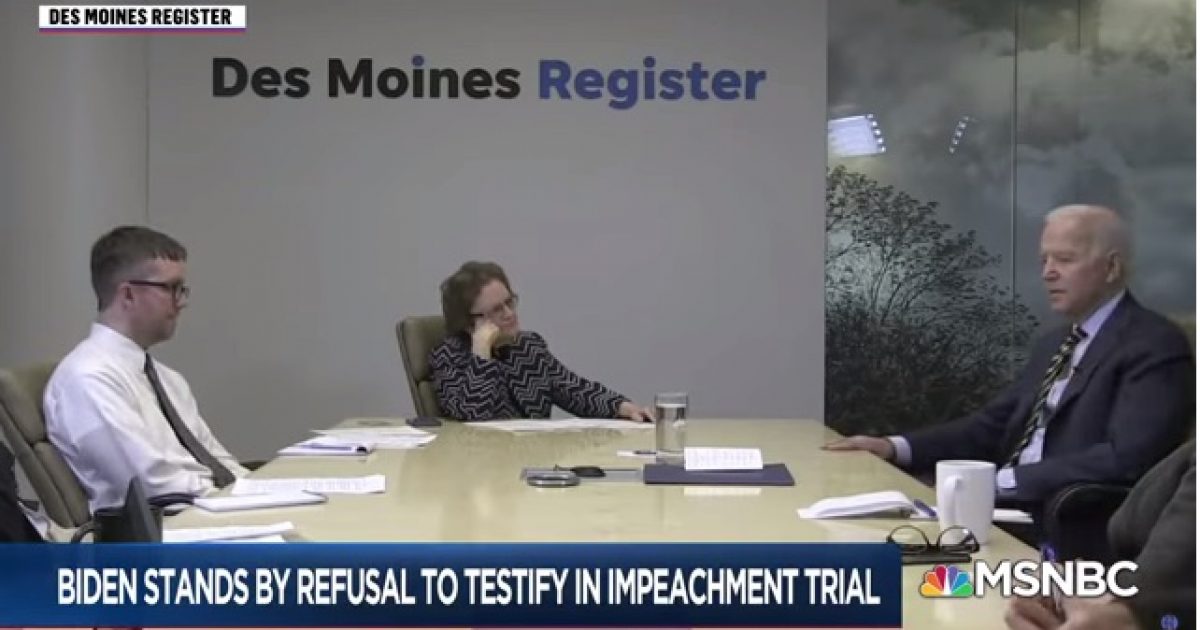 2020 presidential candidate and former Vice President Joe Biden will not be part of the impeachment trial for President Trump.

Biden made the statement during an interview with The Des Moines Register where he clearly states he will refuse to testify in the Senate impeachment trial.

The video also includes a political panel discussing the impact of an impeachment trial on Democrats running to be the party’s nominee to face President Trump in 2020.

Biden justified his position by stating, “The reason I wouldn’t is because it’s all designed to deal with Trump doing what he’s done his whole life: trying to take the focus off him.”

This is not the first time Biden stated he is not willing to appear in the Senate as part of the impeachment trial.

During an interview with NPR in early December, Biden responded to a question about whether he would comply with a Senate subpoena saying, “No, I will not yield to what everybody is looking for here. And that is to take the eye off the ball.”

…..trial in the Senate, and so that our Country can get back to business. We will have Schiff, the Bidens, Pelosi and many more testify, and will reveal, for the first time, how corrupt our system really is. I was elected to “Clean the Swamp,” and that’s what I am doing!

Following his initial comment, Biden sought to clarify his statements about the possible subpoena.

I want to clarify something I said yesterday. In my 40 years in public life, I have always complied with a lawful order and in my eight years as VP, my office — unlike Donald Trump and Mike Pence — cooperated with legitimate congressional oversight requests.

The subpoenas should go to witnesses with testimony to offer to Trump’s shaking down the Ukraine government — they should go to the White House.

He is merely trying to justify his decision by claiming a Republican-driven subpoena is not legitimate.

It’s just a convenient excuse not to appear in the Senate.

Most certainly, Biden does not want to face challenging questions from Republican Senators.

Moreover, the possibility of his son Hunter testifying must keep the former vice president up at night.