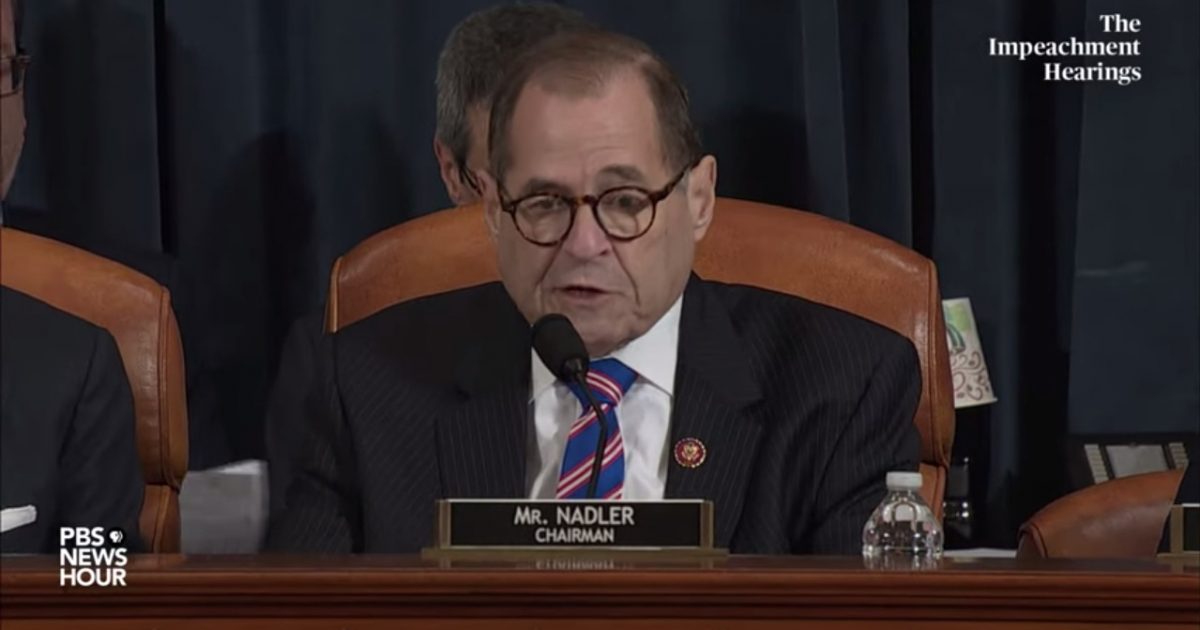 Last night, the House Intelligence Committee approved its report on President Trump and Ukraine on a party-line vote and transmitted it to the Judiciary Committee.

The report stated President Trump’s actions with Ukraine showed he “sought to undermine the integrity of the U.S. presidential election process, and endangered U.S. national security.”

Representative Adam Schiff (D-CA) Tweeted the report and his summary of its findings:

The impeachment inquiry uncovered overwhelming and uncontested evidence that President Trump abused the powers of his office to solicit foreign interference in our election for his own personal, political gain.

No one is above the law.

Today, the Judiciary Committee will hold a hearing on the Constitutional basis for impeaching President Trump with four academic law professors.

If warranted, the Judiciary Committee will write the articles of impeachment.

Representative Jerry Nadler, Chairman of the House Judiciary Committee, started the hearing with his opening statement.

Critics of the Judiciary hearing are pointing out some of the professors testifying are biased against President Trump.

For example, Harvard Law School Professor Noah Feldman told the New Yorker in May 2017 that President Trump could be removed from office without evidence of a crime.

Feldman said, “…even without evidence of an indictable crime, the Administration’s pattern of seemingly trivial uses of public office for private gain ‘can add up to an impeachable offense.'”

Representative Steve Scalise (R-LA) highlighted the fact that 16 members of the Judiciary Committee voted to impeach President Trump in July.

Let's be clear: 16 Dems on the Judiciary Committee already voted to impeach the President back in July.

Tomorrow’s hearing is an orchestrated scam against @realDonaldTrump with a pre-determined outcome.

This has been their plan since Day 1. Don’t let them tell you otherwise.

Before the hearing, Democrats expressed concern about the reaction from Republicans during the hearing.

House Judiciary member @RepJayapal on today's impeachment hearing: "I hope the Republicans don't treat this as a game, but I'm afraid that they might."https://t.co/WMYCTrw5ly pic.twitter.com/9VFsbMRlw0

The selection of law professors testifying and the fact that Democrat members of the Judiciary Committee already voted to impeach President Trump is proof the Democrat effort is purely political.