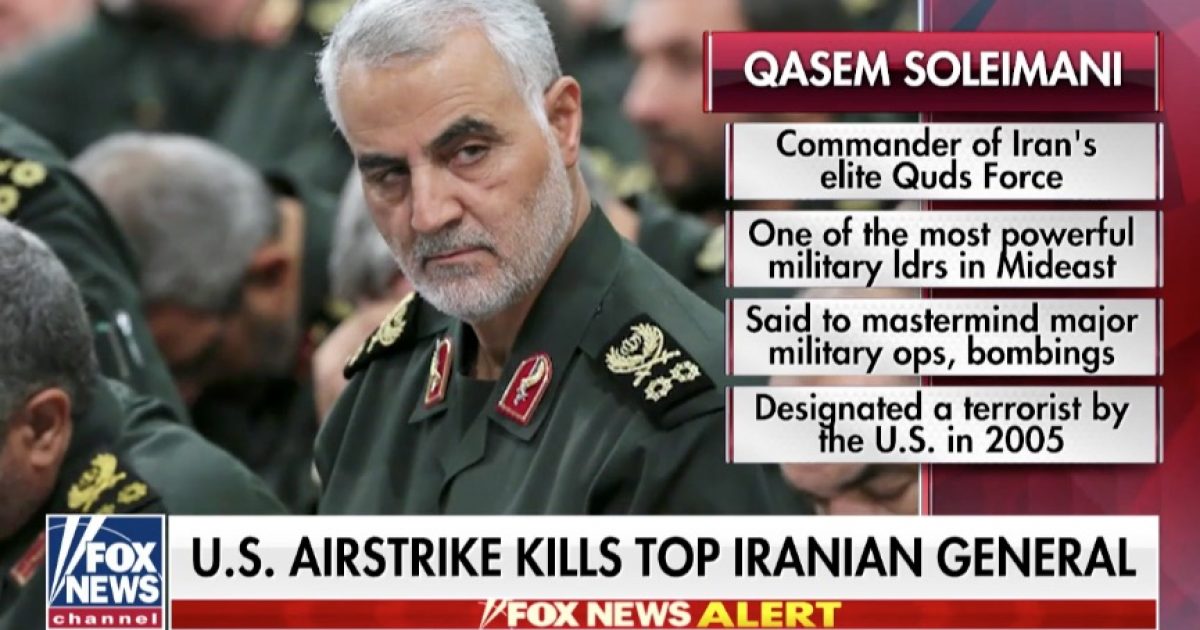 Democrats and the anti-Trump media are having a field day over President Trump’s order to kill Iranian General Qasem Soleimani in an airstrike on Thursday.

The airstrike was followed by the pro-Iran demonstrator’s attack earlier this week on the U.S. Embassy in Iraq which caused damage to outer parts of the embassy compound.

Protesters got as far as the reception area but were unable to get into the main building and according to the U.S. military, the embassy attack was in response to U.S. airstrikes in retaliation against the militia for killing an American contractor last week.

The airstrike against Soleimani was also swift.

The Pentagon confirmed that Soleimani, the head of the Iran Revolutionary Guard Corps’ Quds force, was taken out in a U.S. strike in Iraq directed by President Trump.

Secretary of State Mike Pompeo appeared on CNN and said the airstrike, “saved American lives” and that Soleimani was planning “imminent threats to American lives.”

Qassem Suleimani was responsible for the deaths of hundreds of Americans… As I have previously warned the Iranian government, they should not mistake our reasonable restraint in response to their previous attacks as weakness. Full statement on the death of Suleimani: pic.twitter.com/Sl7ZN7zVIo

We killed the most powerful man in Tehran short of the Ayatollah.

This was not an act of revenge for what he had done in the past.

This was a preemptive, defensive strike planned to take out the organizer of attacks yet to come.

Speaker Pelosi says President Trump carried out the U.S. airstrike that killed a top Iranian commander in Iraq without the consultation of Congress. https://t.co/3FeHQykkJN

Soleimani was an enemy of the United States. That’s not a question.

The question is this – as reports suggest, did America just assassinate, without any congressional authorization, the second most powerful person in Iran, knowingly setting off a potential massive regional war?

Trump Admin owes a full explanation of airstrike reports—all the facts—to Congress&the American people. The present authorizations for use of military force in no way cover starting a possible new war. This step could bring the most consequential military confrontation in decades

Not surprising is how the anti-Trump media weighed in on the airstrike and took aim at President Trump.

CNN host John Berman called the strike against Soleimani “murder” and an “assassination.”

Media Research Center’s Newsbusters provided a montage of outrage and criticism from CNN.

Despite the possible political consequences and current blowback by Democrats and the anti-Trump media, President Trump is showing leadership by acting swiftly against Soleimani.

Soleimani had just arrived in Iraq to cause more problems and was a threat to U.S. troops in the region.

By acting preemptively, President Trump is protecting our U.S. troops.