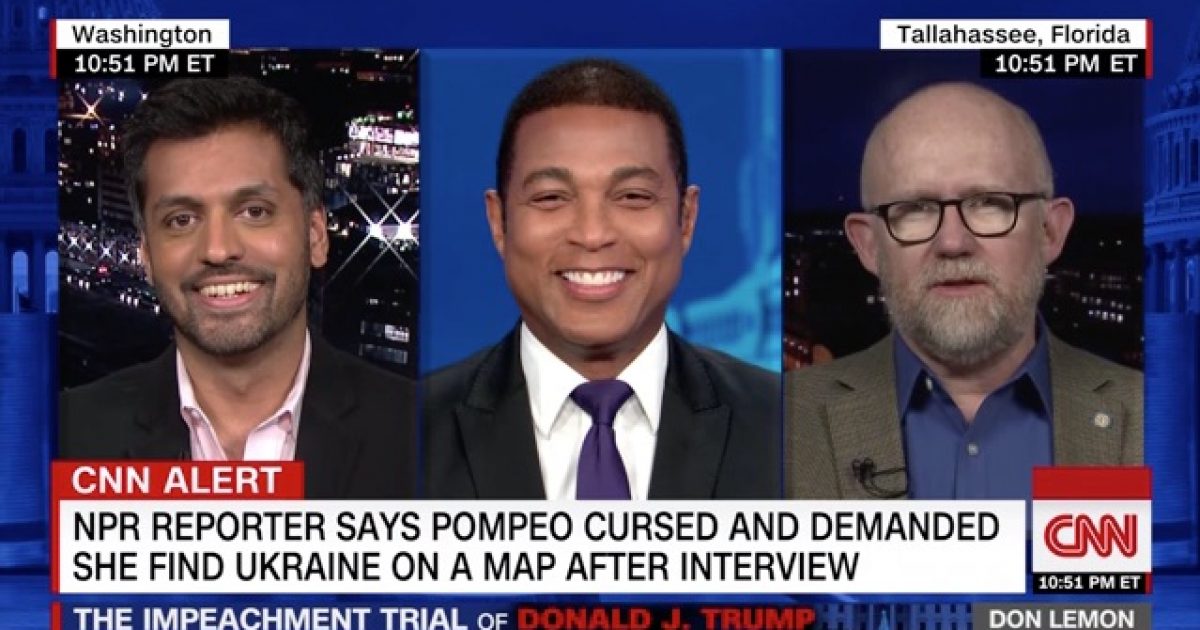 CNN host Don Lemon led a panel that mocked President Trump and his supporters Saturday night during a show on the impeachment trial.

The panel initially discussed an exchange between Secretary of State Mike Pompeo and an NPR reporter.

Wilson started the insults by saying President Trump would not be able to geographically locate Ukraine and the discussion went downhill from there.

Wilson added, “He knows that this is, you know, an administration defined by ignorance of the world. And so that’s partly him playing to the base and playing to their audience. You know, the credulous boomer rube demo that backs Donald Trump.”

Lemon thoroughly enjoyed Wilson’s comments as he laughed at them.

Ali joined in the mockery with his own insulting comments, saying, “You elitists with your geography and your maps- and your spelling!”

Lemon’s panel did not sit well with President Trump.

This is one of the most revolting things I’ve ever seen on CNN, and that’s saying a lot.

America, this is what the liberal media thinks of you: pic.twitter.com/51eBSjeTVR

Lemon and his panel were slammed by other critics.

The arrogance, the dismissiveness, the smug cackling, the accents.

If Donald Trump wins re-election this year, I’ll remember this brief CNN segment late one Saturday night in January as the perfect encapsulation for why it happened. pic.twitter.com/8kQ6zN9AZV

Doubtful. The problem is they see nothing wrong with this type of blatant bigotry. https://t.co/hLEG9kKlNf

Steve Cortes, who has appeared as a CNN contributor and is a Senior Advisor and Spokesman with America First Action PAC, was also critical.

Also a reminder that @WajahatAli is a blatant bigot who used an “Uncle Tom” trope against me on-air at @CNN, declaring that white Trump supporters “will never love you Steve, no matter how hard you try to be the Latin face of Trump.”https://t.co/d6BBZup8et https://t.co/r4gfQipkNG

Trump campaign Director of Communications Tim Murtaugh tweeted, “Not subtle message to huge parts of America: THEY HATE YOU.”

This is a real segment from an actual program on a cable news network that asks to be taken seriously.

Not subtle message to huge parts of America: THEY HATE YOU.

The anti-Trump media hates President Trump as well as his supporters and they don’t even try to hide it.