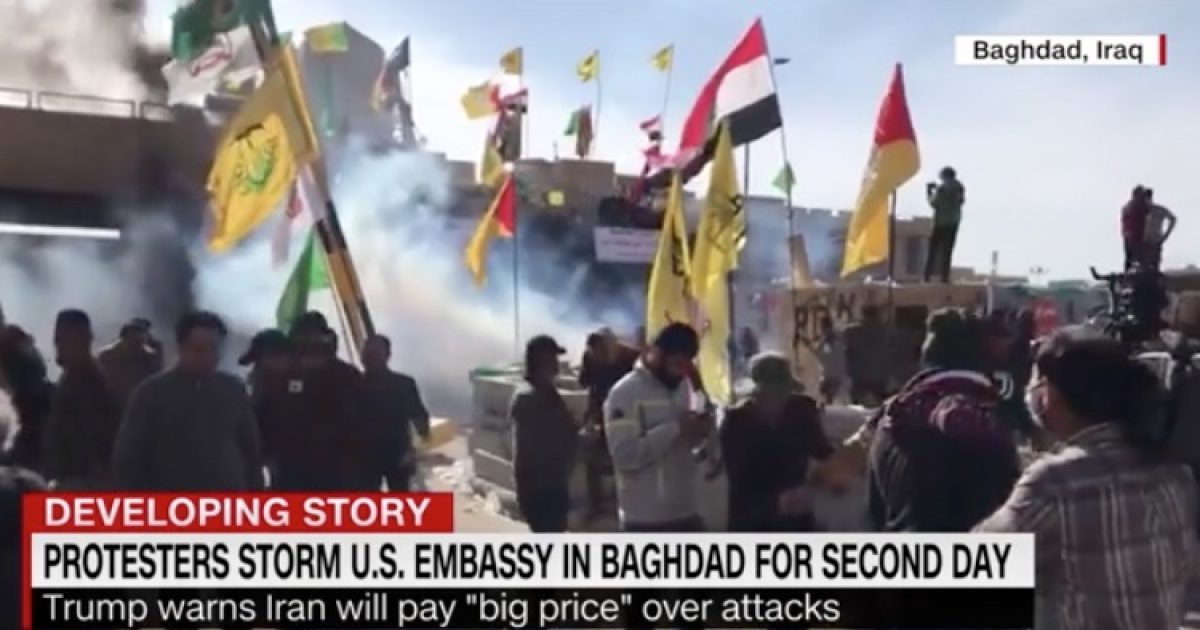 On Tuesday, pro-Iran demonstrators attacked the U.S. Embassy in Iraq causing damage to outer parts of the embassy compound.

Protesters got as far as the reception area but were unable to get into the main building.

According to the U.S. military, the embassy attack was in response to U.S. airstrikes in retaliation against the militia for killing an American contractor last week.

On New Year’s Eve, President Trump vowed, “this will not be a Benghazi.”

Responding to the attack, President Trump commented on social media, saying, “Iran will be held fully responsible” for anything that happens to the U.S. facilities.

….Iran will be held fully responsible for lives lost, or damage incurred, at any of our facilities. They will pay a very BIG PRICE! This is not a Warning, it is a Threat. Happy New Year!

The Trump campaign took to social media and declared, “There will be no Benghazis on President Trump’s watch!”

No lies about a video.

No lies about who was responsible for the attack.

No unanswered calls for help.

There will be no Benghazis on President Trump’s watch! https://t.co/QIdqNOC03x

Democrats used the attack on the U.S. Embassy in Iraq to slam President Trump.

The attack on our embassy in Baghdad is horrifying but predictable.

Trump has rendered America impotent in the Middle East. No one fears us, no one listens to us.

America has been reduced to huddling in safe rooms, hoping the bad guys will go away.

Really hard to overstate how badly Trump has bungled things in the Middle East. One of the only good things going – anti-Iran street protests in Iraq – have now morphed into anti-U.S. protests thanks to Trump's mishandling of Iran policy. https://t.co/1glF0HjRAC

“Trump’s Benghazi” was handled with decisive action, like an actual leader would respond. The response (since they actually bothered to respond, unlike Obama/Crooked) was really the anti-Benghazi response!

President Trump’s swift response to the attack on the U.S. Embassy in Iraq shows this is not another Benghazi.

The president’s actions demonstrate that attacks against U.S. facilities by rogue nations will not be tolerated and will be met with direct action.