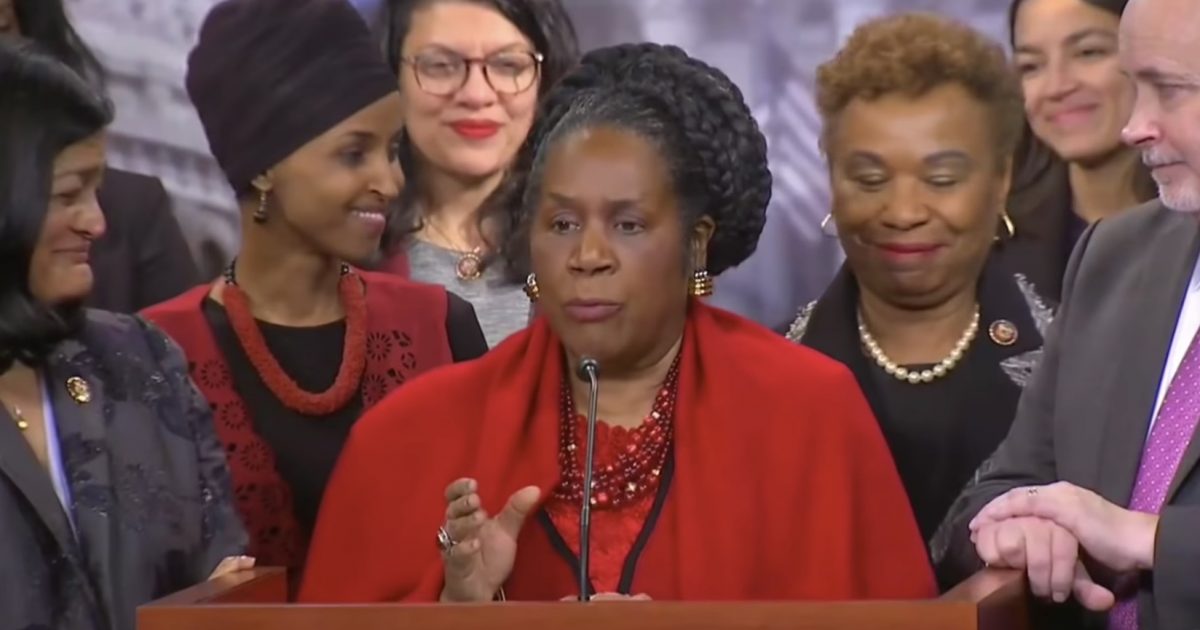 Representative Ilhan Omar (D-MN) is a disgrace in more ways than one.

Earlier this week, missiles were fired at U.S. military bases in Iraq by Iran over President Trump’s order to kill Iranian General Qasem Soleimani in an airstrike last week.

Texas Representative Sheila Jackson Lee spoke at the press conference in support of the resolution and commented on social media.

Today, I joined my colleagues of the Congressional #Progressive Caucus in calling for Congressional action to de-escalate and prevent a catastrophic war with Iran. @RepBarbaraLee, and @RepRoKhanna have put forward resolutions — which I support.
.
.
.#NoWarWithIran pic.twitter.com/eZdV9iNtVF

Lee made comments about U.S. casualties in Iraq and during her remarks, Omar can be seen laughing and chatting with her colleagues.

Omar was blasted for her disgraceful mannerism and lack of respect for our fallen military members on social media.

Our brave men and women in uniform deserve our utmost respect and applause for their service and sacrifice — not mockery and laughter.pic.twitter.com/Lee0tmfGDa

Omar’s remarks at the press conference included the outrageous claim that she was “stricken with PTSD” over the U.S.-Middle East tensions and she was swiftly condemned for her comments

Representative Jim Banks (R-IN), a military veteran, called out Omar and said her comments are “a disgrace and offensive.”

Rep. Ilhan Omar complained she’s “stricken with PTSD” because of recent events in the Middle East.

This is a disgrace and offensive to our nation’s veterans who really do have PTSD after putting their life on the line to keep America safe. pic.twitter.com/twhZDuUDu0

President Trump addressed the nation following the Iranian missile attacks on U.S. military bases in Iraq and announced there would be “punishing” sanctions against Iran.

This makes no sense. Sanctions are economic warfare.

They have already caused medical shortages and countless deaths in Iran.

You cannot claim to want deescalation and then announce new sanctions with no clear goal. This is not a measured response! https://t.co/sGWtwXuNDT

Last year, Omar proposed an anti-Israel resolution “supporting the right to boycott Israel” and critics were swift to remind her.

Ilhan Omar views sanctions on terror regimes to be “economic warfare” but supports them when aimed at the world’s only Jewish state.

Must just be a coincidence. https://t.co/3fl7XAGIrY

Ilhan Omar has now decried sanctions on the Castros in Cuba, Maduro in Venezuela, and the Ayatollah in Iran.

At the same time, she's the leading voice in Congress on sanctioning the Jewish people in the world’s only Jewish state.

Yes, constitutionally intl boycotts & sanctions are tools of war and NOT “free speech.” @IlhanMN should remember that next time she advocates for BDS (Boycott Divestment & Sanctions) against Israel: a US ally.

We don’t fight wars against allies.
We do against enemies. https://t.co/qdRpX7NpEw

Omar continues to be one of the most disgraceful Representatives in Congress and insulting the U.S. military adds to her shameful list of outrageous comments.