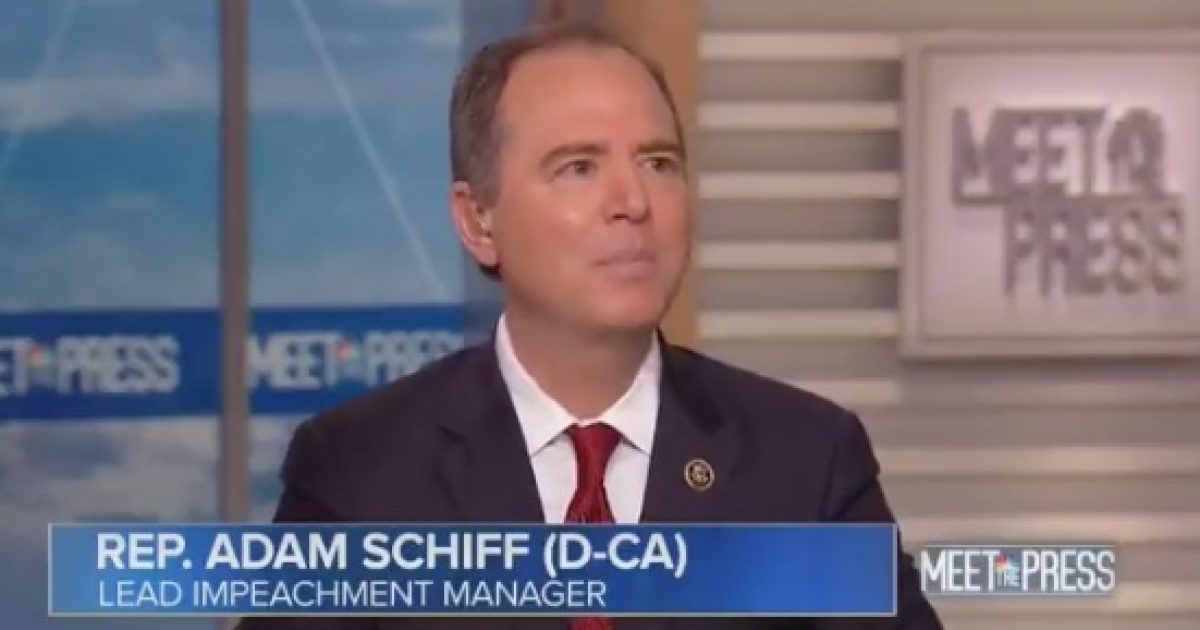 Lead House impeachment manager Representative Adam Schiff (D-CA) is doubling down on his ‘head on a pike’ comment during the impeachment hearings of President Trump.

During his closing arguments, Schiff claimed “a Trump confidant” commented about Republican Senators, saying for those voting against President Trump, “your head will be on a pike.”

Schiff said the comment was reported by CBS News.

A @POTUS confidant tells CBS News that GOP senators were warned: “vote against the president & your head will be on a pike.”

Schiff went on MSNBC’s “Meet the Press” Sunday morning and defended what he said.

GOP Senators react to Schiff’s “Head on a Pike” Remark:

Murkowski: “That’s where he lost me.”

Collins: “I was offended because it wasn’t true.”

Ernst: “I was listening until he got to the part where he just completely made a bunch of bullcrap up.”

President Trump criticized Schiff and the Democrats on social media.

The Impeachment Hoax is a massive election interference the likes of which has never been seen before. In just two hours the Radical Left, Do Nothing Democrats have seen their phony case absolutely shredded. Shifty is now exposed for illegally making up my phone call, & more!

Shifty Adam Schiff is a CORRUPT POLITICIAN, and probably a very sick man. He has not paid the price, yet, for what he has done to our Country!

Earlier in the week, Schiff told the Senate President Trump must be convicted and removed from office to block his reelection.

Schiff is worried if President Trump remains in office he will somehow cheat to get reelected.

On the Senate floor, Schiff said, “For precisely this reason, the president’s misconduct cannot be decided at the ballot box, for we cannot be assured that the vote will be fairly won.”

During the House hearings, Schiff read a fake telephone call transcript between President Trump and the President of Ukraine Volodymyr Zelensky.

Schiff was asked if he regretted reading the fake statement on “Meet the Press” and he said “no.”

When asked if he had any regrets about pushing a FAKE call transcript in front of Congress, Adam Schiff responded “no.”pic.twitter.com/LhJQTOQ4sH

Schiff continues to prove he’s not credible and is grossly misleading Americans with his outrageous comments about President Trump.