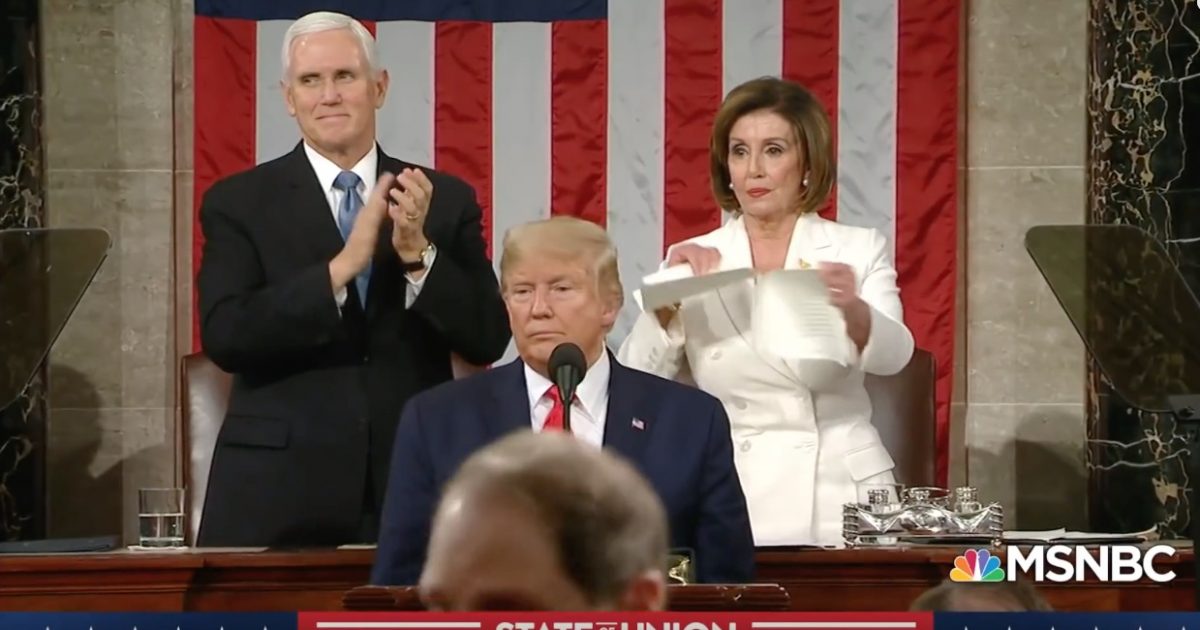 Speaker of the House Nancy Pelosi (D-CA) ripped up a signed copy of President Trump’s State of the Union speech immediately after his delivery.

Pelosi’s response was in full view of the nation and it followed a very strong delivery of the president’s accomplishments for Americans.

Pelosi was not the only Democrat that acted out in The House of Representatives.

Representative Rashida Tlaib (D-MI) walked out of the House floor.

I walked out of that speech. The lies, the bigotry, and the shameless bragging about taking away food stamps that people depend on to live—it was all beneath the dignity of the office he occupies. Shame on this forever impeached president.

In addition, Representative Tim Ryan (D-OH) also walked out during the president’s address to the nation.

I just walked out of the #StateOfTheUnion. I’ve had enough. It’s like watching professional wrestling. It’s all fake.

Pelosi made a brief comment about her tearing up a copy of the president’s speech.

Speaker Pelosi says she tore up her copy of Pres. Trump's State of the Union speech "because it was a manifesto of mistruths." https://t.co/cJFra13WAo #SOTU pic.twitter.com/PzUt1E2q5B

One of our last surviving Tuskegee Airmen.

The survival of a child born at 21 weeks.

The mourning families of Rocky Jones and Kayla Mueller.

A service member's reunion with his family.

The manifesto of mistruths presented in page after page of the address tonight should be a call to action for everyone who expects truth from the President and policies worthy of his office and the American people. #SOTU https://t.co/7rUFbhWDDQ

In contrast, not all Democrats reacted emotionally to the speech.

WAKE UP, folks. The #IowaCaucus was a debacle, followed by a strong #SOTU speech laying out Trump's strategy to win – which includes going for Black voters. This was a warning shot from the Trump campaign to liberals, and we need to take this VERY seriously in order to win. @CNN pic.twitter.com/bgBFms9jtN

President Trump’s speech was widely approved by those that watched his delivery.

According to a CBS News Instant Poll, 76 percent approved of the State of the Union speech.

The effort by Democrats to resist the president and even try to remove him from office is not working out as planned.

President Trump’s America First agenda is working despite the numerous roadblocks set up by the Democrats.