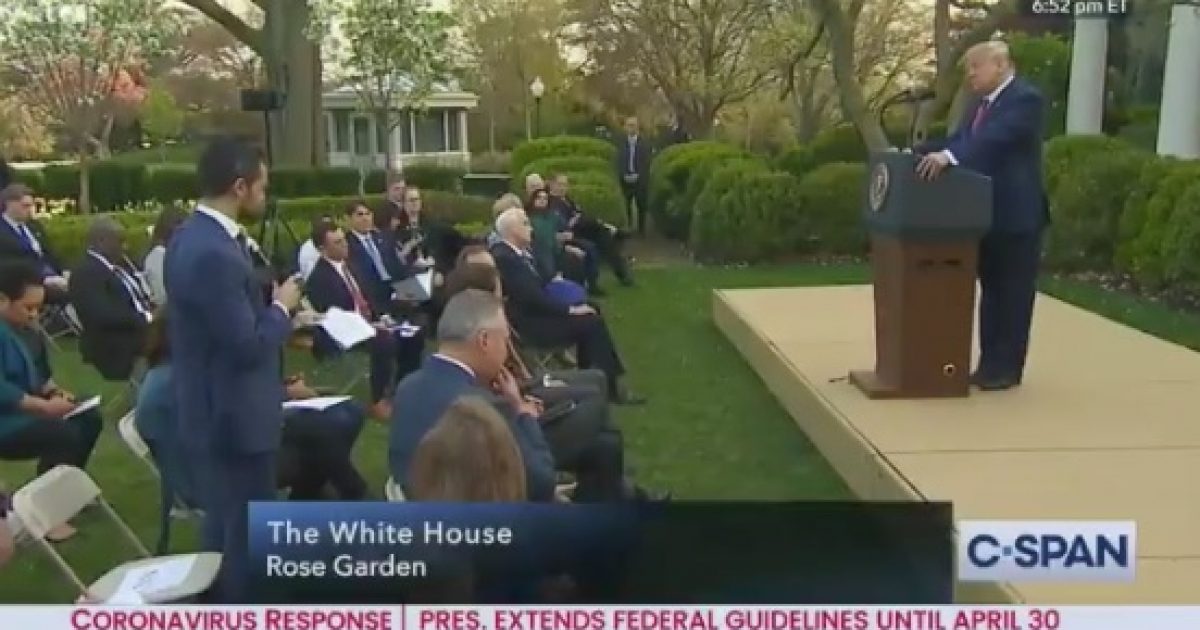 The anti-Trump media is escalating its attack against President Trump over his response to the coronavirus pandemic.

President Trump’s media opponents are trying to blame coronavirus deaths on him.

MSNBC contributor Jennifer Rubin attacked President Trump on Twitter by comparing the deaths in wars to the loss of life as a result of the virus.

If we lose 100,000 to C-19 we will have lost > 2X Americans killed in Vietnam. This is the magnitude of the Trump fiasco. If 200,000 then =WWI plus 2 Vietnams. Since WWII no president will have lost as many Americans on his watch. May also have worst neg growth/unemployment qter

CNN’s Jeremy Diamond used a partial statement by the president to ask a question.

“You were talking about governors of different states and you said I want them to be appreciative. You also said if they don’t treat you right, I don’t call.”

I think @JDiamond1 is still mad that President Trump called him out for taking his comments about being appreciative out of context.

"That is why CNN is not trusted anymore. They are Fake News."

NBC’s Chuck Todd asked 2020 presidential candidate former Vice President Joe Biden if President Trump has “blood on his hands” regarding his response to the coronavirus on “Face the Nation.”

TODAY on #MTP: Former VP @JoeBiden says Trump should "listen to the health experts … the economists."

Biden: "He should be focusing on making sure we are in a situation where we are able to see to it that unemployment benefits can get to people." pic.twitter.com/5q2cWzUKFD

ICYMI: MSNBC's @chrislhayes showed off his clear and obvious bias by calling President Trump a "genuine threat to public health" all while refusing to actually show anything Trump actually said. pic.twitter.com/mbXvB5625C

The attacks against President Trump are backfiring on the anti-Trump media as pointed out by Arizona Republican Representative Paul Gosar.

A recent Gallop poll found 55 percent of U.S. adults disapprove of the way the media is covering the coronavirus pandemic.

When it comes to handling the response to the Wuhan #coronavirus, the news media ranks dead last. pic.twitter.com/FTRDG25EUQ

Media Research Center’s Newsbusters.org highlights the media’s bias over President Trump and his handling of the coronavirus.

What bias? ABC and Washington Post journalists are worried that President @realDonaldTrump's strong polling numbers on how he's handled the coronavirus outbreak will "reinforce… the belief he's doing the right thing." https://t.co/u2KGufX0pl

During a time of crisis, Americans want the truth and not political advocacy from the media.

By attacking the president now in the middle of a health crisis, media outlets are doing a great disservice to the public and are destroying any credibility they had.