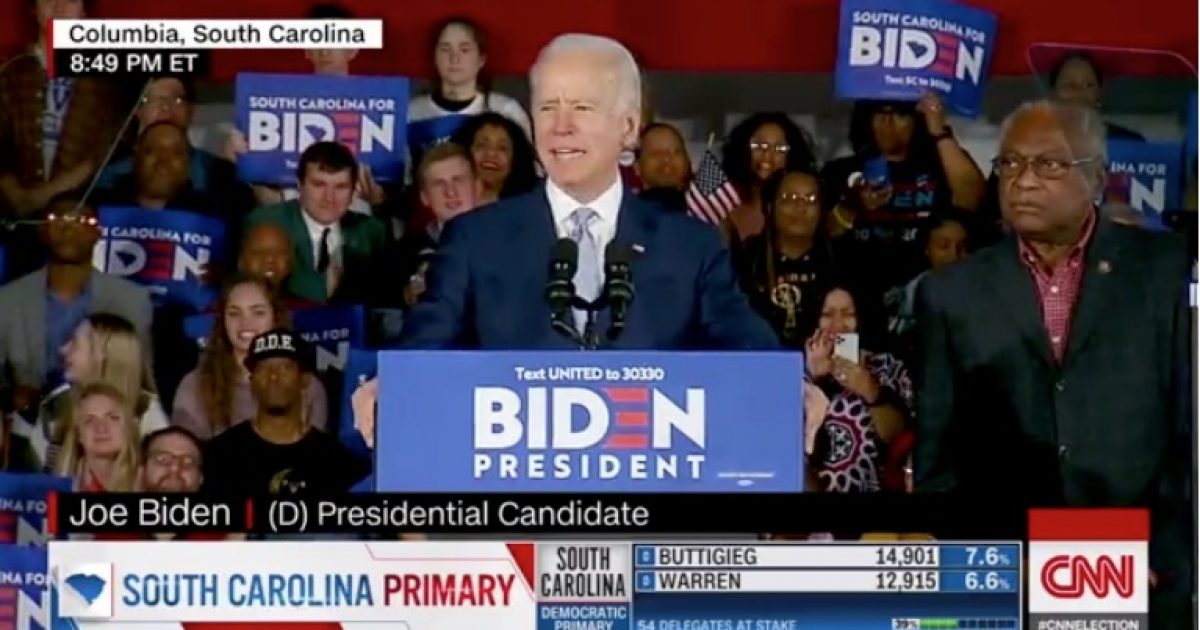 Biden won South Carolina by a large margin getting 48.5 percent of the vote and Vermont Senator Bernie Sanders came in a distant second with 19.9 percent.

Billionaire Tom Steyer came in third place with 11.3 percent and officially dropped out of the race.

Biden gave a victory speech after his big win in South Carolina.

I'm about to take the stage from South Carolina. Tune in to watch live: https://t.co/lrtklurDrY

Biden leveraged his first win in the primary contest by seeking much-needed money to fuel his campaign.

South Carolina, I can't thank you enough. Tonight's big victory has launched us forward, and we need your help to keep the momentum going.

Please chip in a few dollars if you can — it'll make a big difference: https://t.co/3aG5mzOI3W pic.twitter.com/4gsyMNZDdw

As pointed out by NPR, the win by the former vice president makes it look like a two-man race between Biden and Sanders.

However, NPR neglected to fully analyze the impact of former New York City Mayor Michael Bloomberg tossing over $400 million in advertising to win the Democrat contest and for the first time, he will be on the ballots in Super Tuesday.

Bloomberg is the wild card in the race.

Ironically, Bloomberg entered the contest because he believed Biden’s campaign was floundering and his presence in the Democrat primary race will suck votes from Biden, giving Sanders an advantage.

In addition, Buttigieg and Klobuchar remain in the race and votes for them will also harm Biden.

As Super Tuesday rapidly approaches, the reemergence of Biden will complicate the outcome of next week’s big contest.

In the end, Biden’s strong showing will drain resources from Democrat donors and adds tension among the multiple campaigns, as well as possibly leading to a brokered Democratic convention.