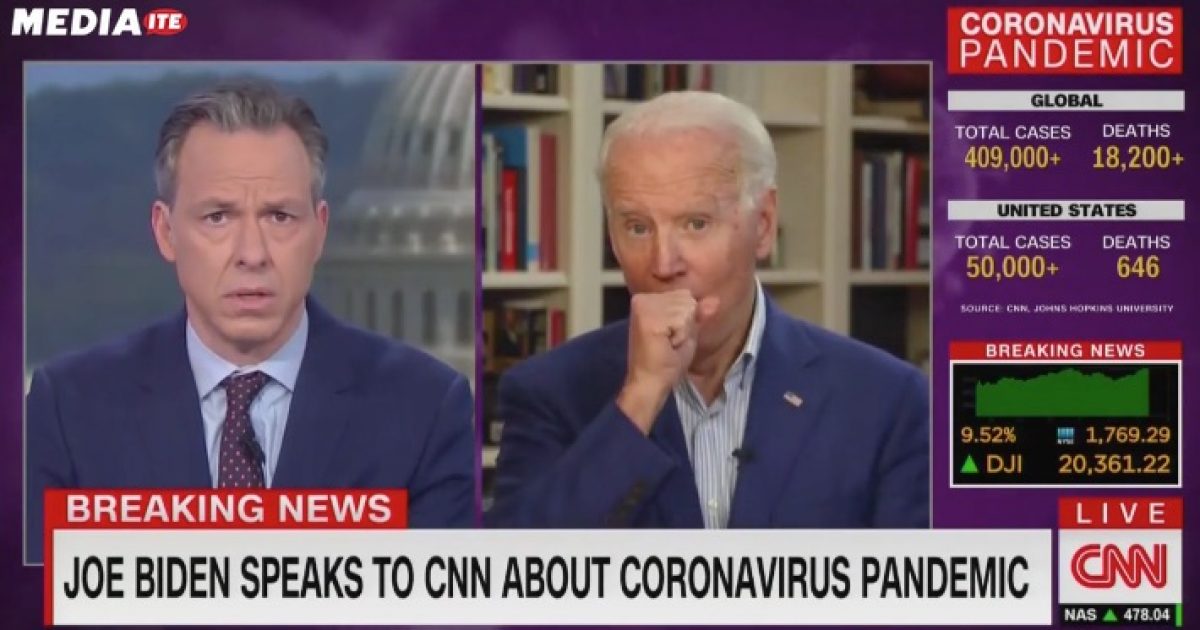 2020 presidential candidate former Vice President Joe Biden continues to make one blunder after another along the campaign trail.

Within a matter of days, Biden’s television appearances were chock full of slip-ups and errors.

As the China coronavirus spreads throughout the U.S., the Centers for Disease Control and Prevention (CDC) guidelines over the proper way to sneeze or cough into the inside of one’s elbow are recommended to prevent the spread of germs.

Biden was schooled on live television by CNN’s Jake Tapper over how to properly cough when he did so into his hand.

CNN's Jake Tapper just had to show Joe Biden how to properly cough during their interview. pic.twitter.com/SdA7Be69TW

Biden held a campaign event online and said after he left the U.S. Senate, he “became a professor at the University of Pennsylvania,” which is incorrect.

So Biden just said "when I left the United States Senate, I became a professor at the University of Pennsylvania."

Responding to a question about President Trump’s comment on the coronavirus, Biden got mixed up over what he wanted to say.

Q: “Are you at all concerned, as Trump said, that we cannot let the cure be worse than the problem itself?”

BIDEN: “We have to take care of the cure, that will make the problem worse no matter what”
pic.twitter.com/6N0ugSBe8f

While live-streaming his remarks about the coronavirus with a teleprompter, things didn’t go as planned for Biden.

The former vice president was detailing his plan to fight the coronavirus crisis, but appeared to lose track of his place on the teleprompter. Biden signaled to his staff that there was something wrong, before going off on an awkward ad-lib.

What is Joe Biden doing with his hand here?

It looks like Biden’s teleprompter went down during his coronavirus press briefing today, and his staff forgot to put a copy of his speech at the podium. pic.twitter.com/YVBz1QJK2R

You can tell @JoeBiden is speaking from the heart and knows this issues really well by the way he gets completely lost when the teleprompter stops. https://t.co/cP86e7KTgr

Joe Biden finally appeared before the American public after being MIA for nearly a week where he read a rehearsed speech.

What the hell is going on with Joe that he is incapable of speaking to the people without a teleprompter or cue cards?

Earlier this week, Biden appeared on MSNBC with host Nicole Wallace and engaged in an awkward discussion.

Joe Biden: "I just can't figure the guy. It's like, I don't know, it's like watching a yo-yo. I shouldn't have said it that way."

Biden’s public appearances are cringeworthy and hard to watch which begs the question if he’s up to the challenge of running for president.