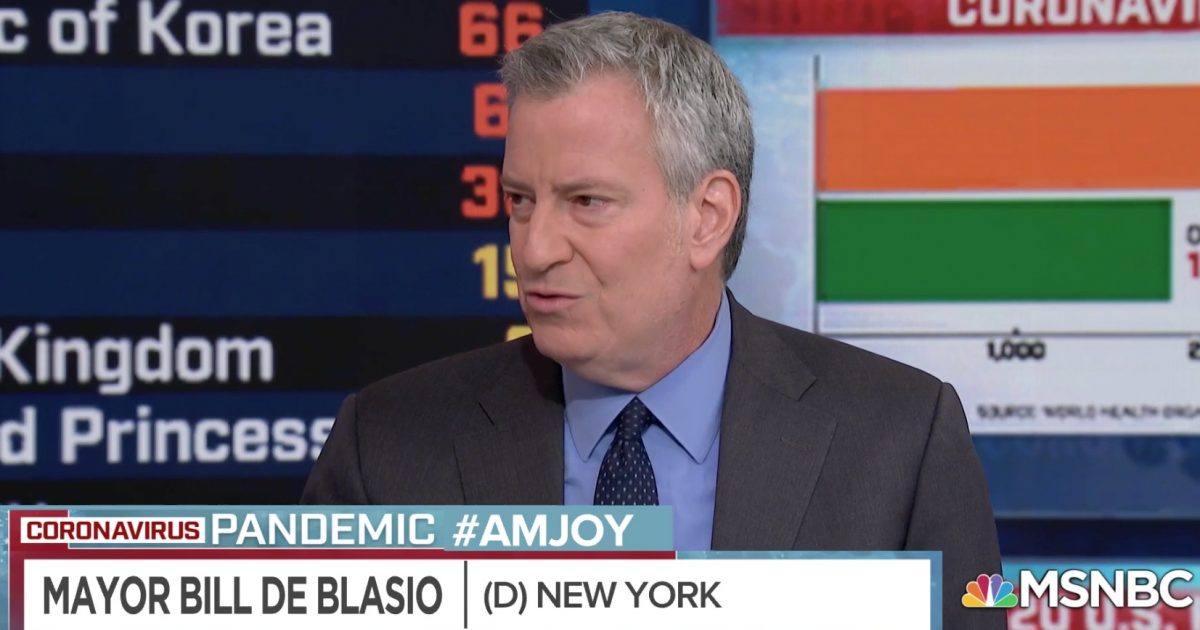 New York City Mayor Bill de Blasio made the rounds on weekend talk shows to discuss his thoughts on ways to handle the fallout over the Coronavirus, including calling for nationalizing industries.

The mayor made the alarming comment on MSNBC and also said what’s happening with the Coronavirus outbreak is a “war-like situation.”

.@BilldeBlasio: Where's our federal government making sure we have the ventilators we're going to need? …when it comes to surgical masks? This is a case for a nationalization crucial factories and industries that could produce medical supplies to prepare this country… #AMJoy pic.twitter.com/gVueSp3WqD

Ironically, while de Blasio aired his list of grievances over the federal government’s response to the virus, he somehow found time to hit the gym Monday morning prior to New York Governor Andrew Cuomo’s orders to shutter establishments, including gyms by Monday evening.

Critics called de Blasio out for his words and actions.

Blasio wants the ‘nationalization of factories and industries' to combat the coronavirus.

I’m not sure how NYC is still functioning with this clown in charge! pic.twitter.com/ZbrDzTyJYr

Mayor de Blasio is indeed here at the Park Slope YMCA this morning. Passers by have commented negatively. One called him an idot. pic.twitter.com/FIgEmlf4Gf

Another former City Hall employee told The Post, “Every New Yorker’s regular routine has been put on hold. His should be, too. Get to work. Set an example. This is embarrassing.”

The governors of New York, Connecticut, and New Jersey worked together to impose restrictions on gatherings, restaurants, and bars to curb the spread of the virus and to deter people from frequenting establishments across-state lines.

There are some exceptions to the restrictions in New York City.

Some businesses in New York are shutting down. These are the ones that are exempt:

Using a crisis to take over industries is a classic move by socialists.

Importantly, nationalizing industries didn’t work in Venezuela and it won’t work here in the U.S.