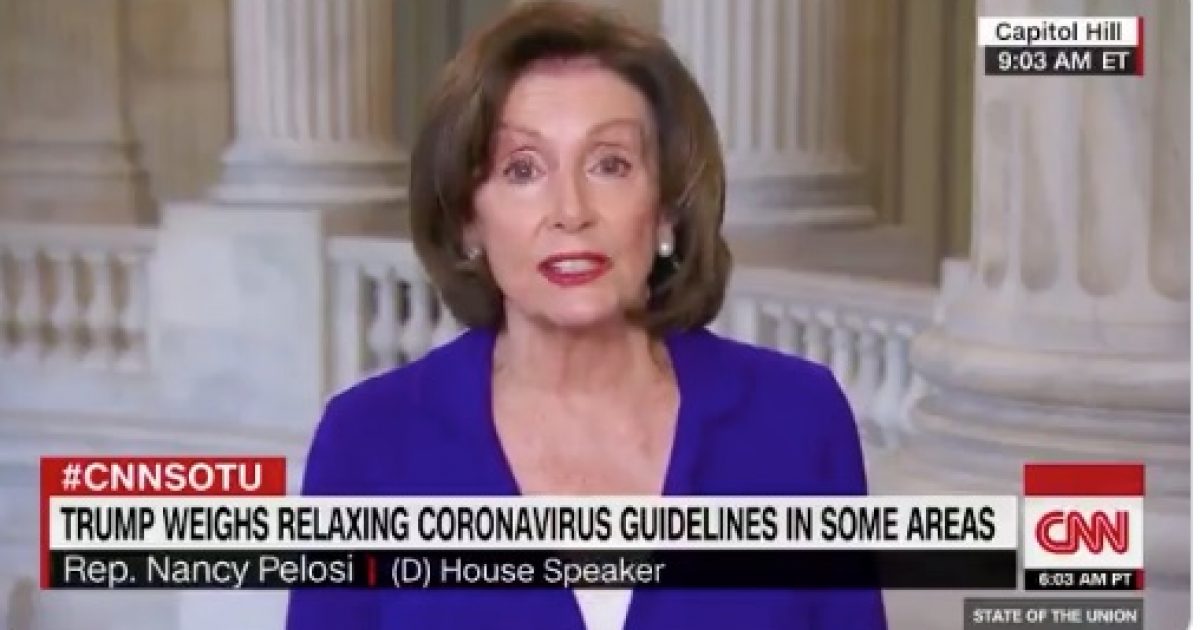 Speaker of the House Nancy Pelosi (D-CA) criticized President Trump over the way he is handling the coronavirus crisis.

During an interview on CNN’s “State of the Union,” Pelosi accused the president of denying the deadly nature of the virus and his inability to get equipment to states that needed it.

She also questioned President Trump’s thought about easing restriction guidelines in the near future for some areas.

Pelosi added, “As the president fiddles, people are dying.”

.@SpeakerPelosi says the President downplaying the severity of #coronavirus is “deadly."

“As the President fiddles, people are dying. We just have to take every precaution.” #CNNSOTU pic.twitter.com/y8bFNbaPJy

Meanwhile on NBC’s “Face the Nation,” host Chuck Todd asked 2020 presidential candidate former Vice President Joe Biden if President Trump has “blood on his hands” regarding his response to the coronavirus.

TODAY on #MTP: Former VP @JoeBiden says Trump should "listen to the health experts … the economists."

Biden: "He should be focusing on making sure we are in a situation where we are able to see to it that unemployment benefits can get to people." pic.twitter.com/5q2cWzUKFD

Biden said he would use the Defense Production Act more than the degree to which the president is using it.

WATCH: Former VP @JoeBiden says on #MTP he would be "moving rapidly" on the Defense Production Act if he was president.

Biden: "I would do the same thing for masks and gowns … and all the things our first responders and doctors and nurses need. Why are we waiting?" pic.twitter.com/jFov1z2Wj7

Democrats and the anti-Trump media are on the attack in a desperate effort to exploit the coronavirus crisis to undermine President Trump.

Todd asked Biden a loaded question and Pelosi accused the president of being incompetent and uncaring about Americans.

As always, Democrats and their media allies accuse President Trump of what they are actually doing.

Pelosi was the one fiddling last week when she stalled the coronavirus relief bill by trying to fill it with left-wing agenda items such as the Green New Deal.

.@GOPLeader: Nancy Pelosi is already talking about a fourth package “because she did not get in the things that she really wanted“

If anyone has blood on their hands it’s Pelosi because her actions prevented a prompt vote on the bill.

That feeling about Pelosi was expressed by some on Twitter.

This is the woman who blocked relief for Americans unless she got her pet projects included.

Now she wants us to believe our President is to blame?