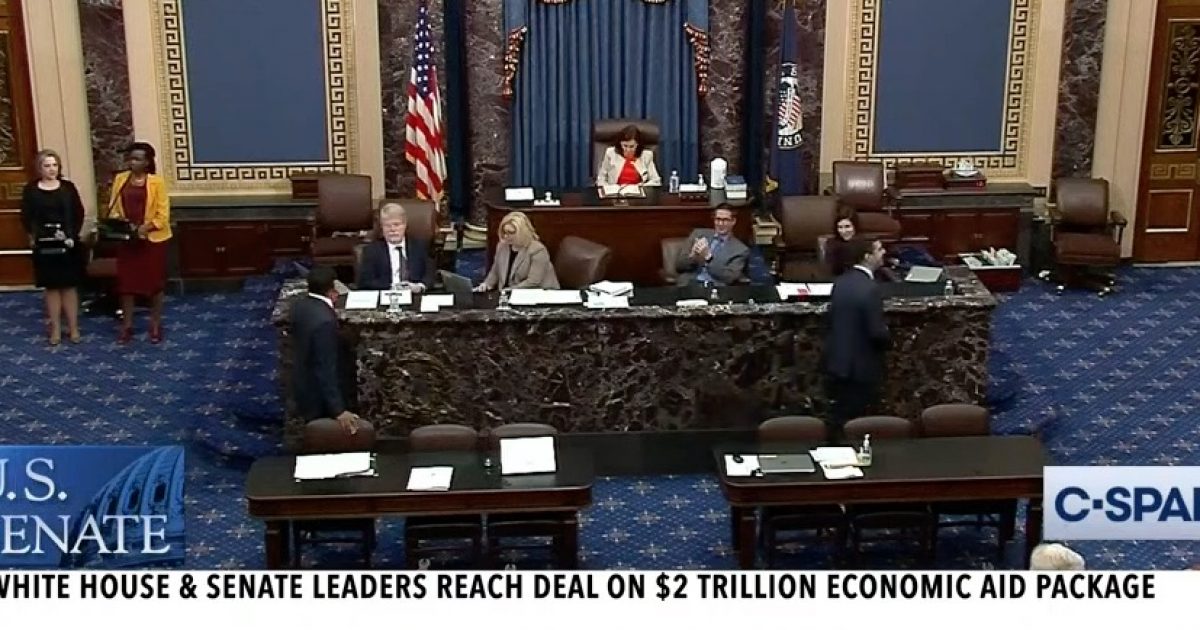 The Senate passed a massive $2 trillion economic stimulus bill just after midnight on Wednesday to bolster businesses and families that are struggling to deal with the consequences of the China coronavirus.

The bipartisan breakthrough in the Senate capped days of heated negotiations that had nearly been derailed by last-minute demands from House Democrats.

At last, we have a deal.

After days of intense discussions, the Senate has reached a bipartisan agreement on a historic relief package for this pandemic.

It is not a moment of celebration but one of necessity

The bill allows the federal government to distribute $1,200 checks to families depending on their income level.

Also, the bill provides a $367 billion loan program for small businesses and sets up $500 billion for loans for corporations, cities, and states.

President Trump supports the bill but it needs to be approved by the House of Representatives before it’s sent to his desk.

Despite the rescue package size, it’s only a temporary fix for the economy and the public is eager to find out when the U.S. will be open for business.

During a Fox News virtual town hall this week, President Trump discussed the economy and said Americans “…don’t want to be locked in a house or an apartment or some space,” and wants “…the country opened up and just raring to go by Easter.”

President Trump says that he would love to have the country opened up and running again by Easter.

Bill Hemmer adds that it would be a “Great American Resurrection”

President Trump’s desire to take the muzzle off of America’s economic engine was criticized.

Dr. Zeke Emanuel warns against the consequences of 're-opening the country' prematurely.
“You can’t minimize the economic damage until we actually get our arms around this public health emergency.” https://t.co/9qYSLo3pqx

"We did not act when we should have acted," Joe Biden says in regards to the COVID-19 pandemic. "We have to focus on people's health. Listen to the scientists."

"We haven't even flattened the curve out … it's frustrating to hear this president speak."https://t.co/AX7RztEiDM

While progress is being made at the federal level, state governors and local officials are dealing with the crisis in a diverse manner.

Governor Andrew Cuomo used his mother as an example to urge the continuation of the New York state lockdown that puts lives before the potential economic cost.

Nevada Democrat Governor Steve Sisolak issued a ban of the anti-Malaria drugs that have shown some preliminary positive results for coronavirus patients.

Sisolak said there was no consensus among experts or Nevada doctors that the drugs can treat people with COVID-19.

Following the Senate vote expected today, the House of Representatives is expected to vote on the bill on Thursday.