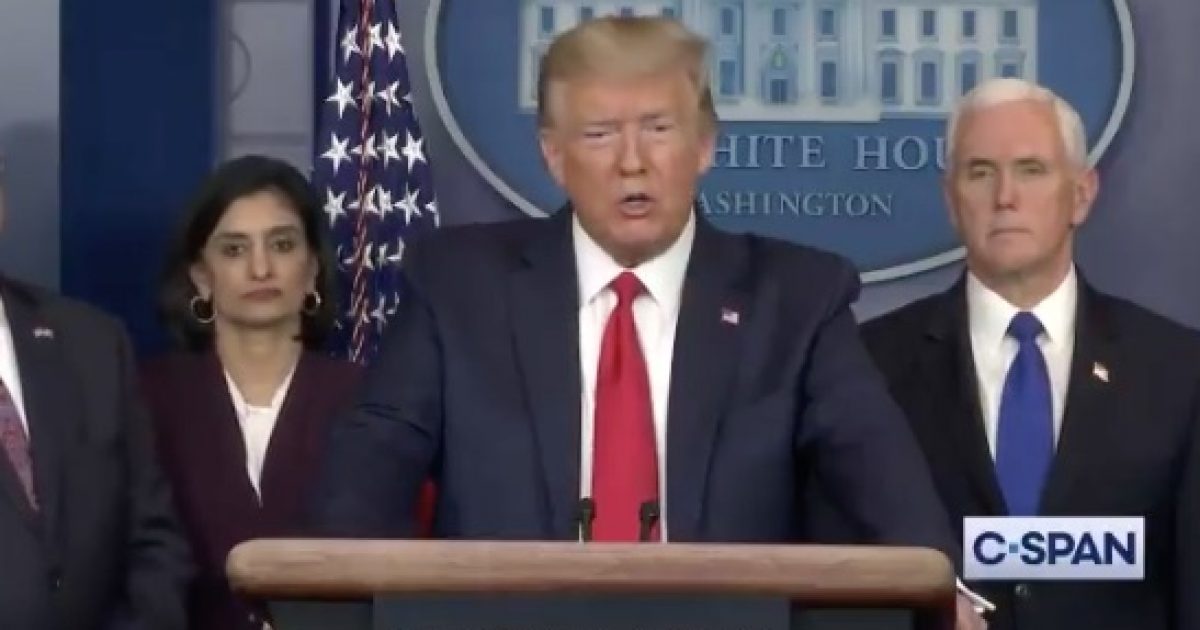 President Trump is doing everything in his power to ensure the health and safety of the American people during the coronavirus pandemic. While the president is working tirelessly to save American lives as COVID-19 sweeps across the country, Democrats and members of the liberal media remain committed to destroying his presidency.

To mitigate the impact of the coronavirus pandemic, the president took prudent early actions that saved thousands of American lives. At the end of January, Trump promptly restricted travel from China and assembled the White House Coronavirus Task Force to manage our country’s response to the health emergency. In recognizing the seriousness of coronavirus, the president put Vice President Mike Pence in charge as the task force leader to work in tandem with medical and health care experts and department heads.

To keep the American people fully informed, President Trump and task force members are holding daily press briefings. These briefings include extended question and answer periods with the media in order to ensure Americans are fully aware of the latest information on the coronavirus outbreak. The president wants to guarantee the American people have the most up to date information and stay calm as we get through this public health crisis.

The president’s task force implores Americans to limit social interaction, self-isolate and practice good hygiene as some of the best practices to help combat and slow the spread of the virus. In addition to saving lives, these actions will help mitigate concerns about our health care system being overwhelmed by a surge in hospital admissions.

The Food and Drug Administration is responding to President Trump’s demands to fast track drugs and devices aimed at tackling the pandemic, including approvals that will protect health care workers, improve patient outcomes, and provide diagnostic tools for rapid coronavirus testing.

Unfortunately, Democrats and the anti-Trump media are exploiting the crisis to demonize the president.

Democratic presidential candidate Joe Biden told CNN that President Trump has “been very slow to act,” over the virus and that “many of the things he says are simply not accurate.”

Following her attempt to load the $2 trillion relief bill with left-wing agenda items, House Speaker Nancy Pelosi, D-Calif., accused the president of being responsible for the loss of life. During a CNN interview, Pelosi said, “As the president fiddles, people are dying.”

The anti-Trump media agenda is on full display over the president handling of the coronavirus crisis.

In a bizarre turn of events, some TV hosts want less news by calling for the end of the daily press briefings.

MSNBC host Rachel Maddow said on her show that if President Trump “keeps lying” that “all of us should stop broadcasting it,” while her colleague Chris Hayes called the press briefings “dangerous.”

The Washington Post story about reporters refusing to attend the daily briefings claims that “reporters are keeping their distance because they are concerned about the health risks,” and are not protesting or “attempting to silence” President Trump.

CNN went as far as not to air President Trump’s comments during the March 31 press briefing.

Ironically, there was a time when the media demanded daily White House press briefings but now, they’ve changed their tune.

Democrats and their liberal media allies realize President Trump and his administration are doing an amazing job. They’re terrified that the daily briefings will demonstrate his bold leadership to voters.

Moreover, according to the Real Clear Politics average poll, Trump’s approval rating is on the rise to hitting a record high.

The bottom line is that President Trump’s enemies are afraid that his incredible leadership during this national crisis will result in his reelection this November. Democrats and the media are willing to do anything in order to prevent that from happening — even if comes at the expense of the American people.