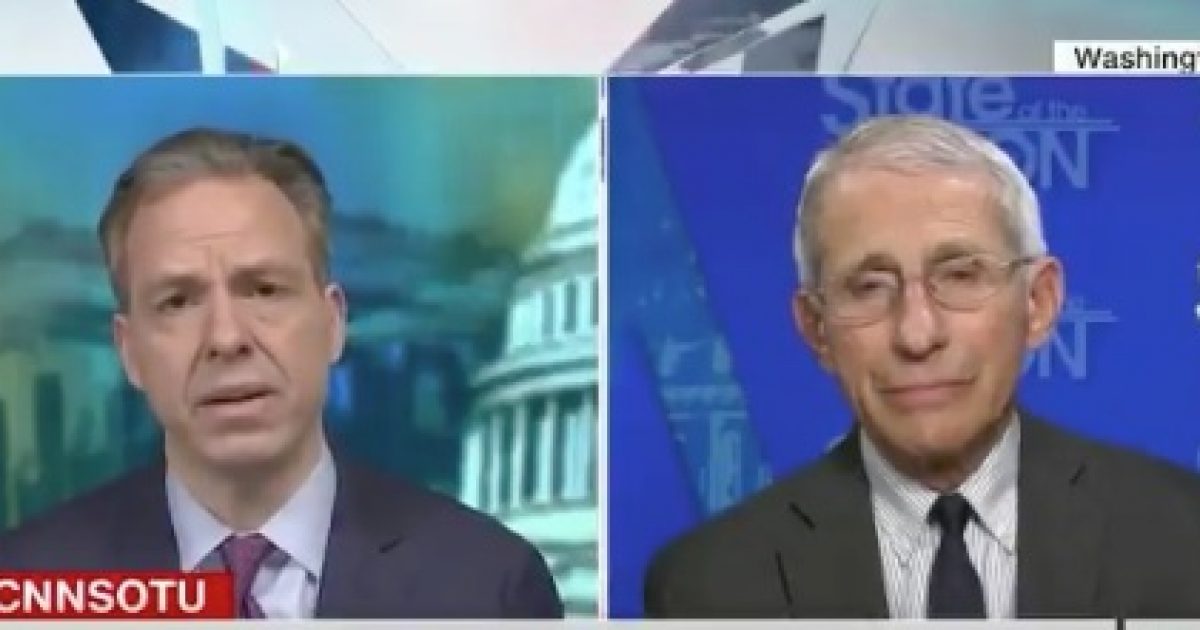 The media and President Trump’s adversaries are pouncing on a claim the president was slow to react to the public health threat posed by the coronavirus.

The New York Times story, “He Could Have Seen What Was Coming: Behind Trump’s Failure on the Virus,” was a topic in an interview with Dr. Anthony Fauci on CNN’s “State of the Union.”

During the discussion with host Jake Tapper, Fauci said the administration didn’t listen to recommendations to enact social distancing in February.

In response to Tapper’s question about The New York Times story asserting that Fauci and others recommended social distancing to the president at the end of February, Fauci said, “We make a recommendation. Often, the recommendation is taken. Sometimes, it’s not.”

In addition, Fauci answered a speculative question about whether the consequences of the coronavirus would have been reduced if the federal recommendation came earlier.

.@JakeTapper: Do you think lives could have been saved if social distancing and stay-at-home measures had started in February instead of March?

Dr. Anthony Fauci: "…Obviously, if we had right from the very beginning shut everything down, it may have been a little bit different" pic.twitter.com/KfCsLB2OHr

Fauci told MSNBC’s Al Sharpton “we were in real trouble” over the coronavirus “towards the middle to end of January.”

Fauci’s comments to Tapper and Sharpton are in direct conflict with what he said during other interviews.

Indeed, Fauci – a member of the White House Coronavirus Task Force – was not advocating early on for aggressive government action to combat the virus.

During an interview on NewsmaxTV on January 21, Fauci said the coronavirus “is not a major threat to the people of the United States.”

In January, Dr Tony Fauci was on my show telling America not to worry about the Coronavirus—that it wasn’t a major threat to the people. January 21, 2020, 20 seconds: pic.twitter.com/RLDivpgbAq

Over a month later on February 29 on NBC’s Today Show “Health & Wellness,” Fauci commented on the coronavirus fears saying, “No need to change lifestyle yet.”

Sorry Fake News, it’s all on tape. I banned China long before people spoke up. Thank you @OANN https://t.co/d40JQkUZg5

The president’s retweet is getting media attention because of the hashtag “FireFauci.”

A story by The New York Times on Sunday is playing up the president’s Tweet that used the “FireFauci” hashtag.

President Trump publicly signaled his frustration on Sunday with Dr. Anthony S. Fauci, the federal government’s top infectious disease expert, after the doctor said more lives could have been saved from the coronavirus if the country had been shut down earlier.

President Trump is defending himself from the attacks by the media.

If the Fake News Opposition Party is pushing, with all their might, the fact that President Trump “ignored early warnings about the threat,” then why did Media & Dems viciously criticize me when I instituted a Travel Ban on China? They said “early & not necessary.” Corrupt Media!

The anti-Trump media are ignoring Fauci’s conflicting statements about the timing of his recommendations because they want to blame President Trump.

President Trump’s adversaries are misleading the public over the response to the coronavirus and are ignoring the big picture of who is to blame which are the officials from China and the World Health Organization.