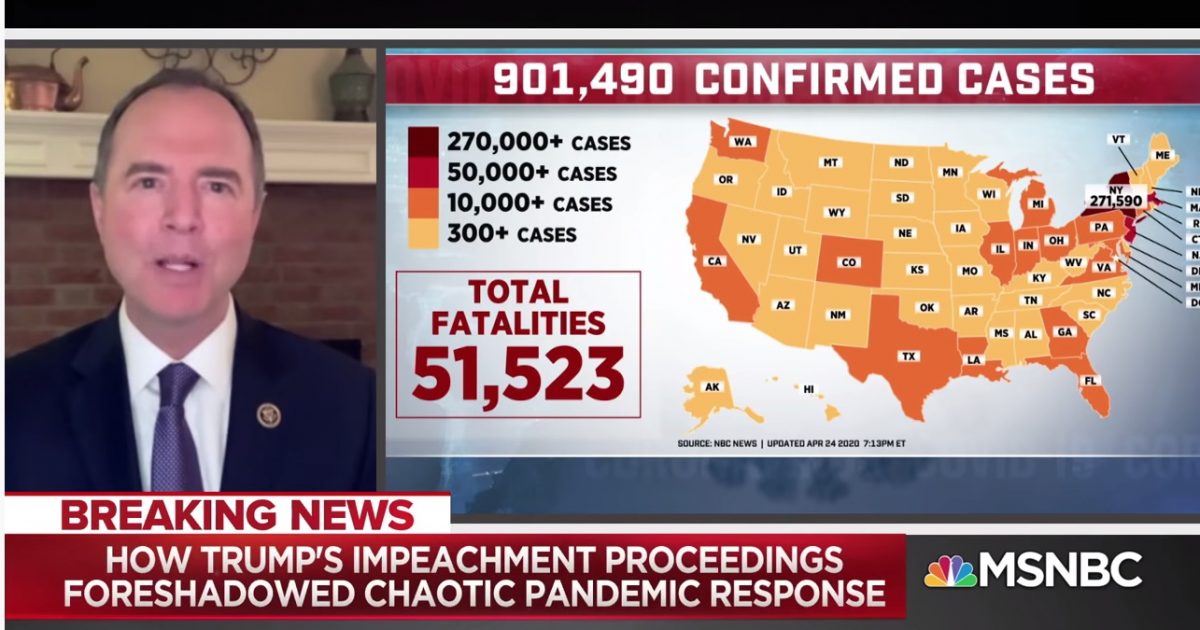 Democrats are increasingly blaming President Trump for the coronavirus outbreak in the U.S.

On MSNBC Friday night, California Representative Adam Schiff defended impeaching the president and blames President Trump for the death of over 50,000 American lives.

Schiff was so proud of his performance in the interview he promoted a soundbite on Twitter.

From eschewing pandemic preparedness and oversight to demanding praise,

Trump acts in his personal political interest, not the national interest.

Because a man with no moral compass will never find his way. pic.twitter.com/Z6M4p8ZS5Z

Schiff’s comments followed an introduction by MSNBC host Chris Hayes saying the president is repeating similar actions with the coronavirus that led to his impeachment.

There appears to be no limit for Democrats and the anti-Trump media.

Not only are they blaming the president for the coronavirus deaths but they are going as far as to say that opening up the economy will financially benefit wealthy Republicans endangering the lives of black and brown workers.

The anti-Trump media are also promoting the idea the coronavirus outbreak is the president’s fault.

The Media Research Center’s Newsbusters unit put together a series of media clips showing the media blaming the president.

MSNBC host Joy Reid said opening up the Texas economy will benefit wealthy Republicans while endangering the lives of black and brown workers.

Let’s also not forget that Democrats and the anti-Trump media are choosing not to hold China and the World Health Organization (WHO) accountable for the pandemic because they want to blame it all on President Trump.

“I walked out of that closed-door briefing just with chills running down my spine… It was just shocking how cavalier the administration was.”

House Speaker Nancy Pelosi (D-CA) claimed President Trump’s travel restriction from China was ineffective because “Tens of thousands of people were still allowed in from China. It wasn’t as it is described as this great moment. … If you’re going to shut the door because you have an evaluation of an epidemic, then shut the door.”

Speaker Pelosi on Trump's China travel restriction: "Tens of thousands of people were still allowed in from China. It wasn't as it is described as this great moment. … If you're going to shut the door because you have an evaluation of an epidemic, then shut the door" #CNNSOTU pic.twitter.com/jpKFxYVCu6

Pelosi is also using the crisis to plan a way for Democrats to release federal prisoners.

.@SpeakerPelosi calls for release of federal prisoners: "In our caucus, we are very devoted to the Gospel of Matthew; 'When I was hungry, you fed me, when I was homeless, you sheltered me, when I was imprisoned, you visited me.' And so this for us is a part of our value system." pic.twitter.com/GGN7F6llQU

Most troubling is the Democrat politicians and the anti-Trump propaganda is working with a majority of Democrats.

Rasmussen Reports poll reported 60 percent of Democrats think President Trump is to blame for the coronavirus outbreak in the U.S., not China or the WHO.

I never said the pandemic was a Hoax! Who would say such a thing? I said that the Do Nothing Democrats, together with their Mainstream Media partners, are the Hoax. They have been called out & embarrassed on this, even admitting they were wrong, but continue to spread the lie!

Democrats and their anti-Trump media allies are going all out to use the coronavirus effort to damage President Trump before the election.