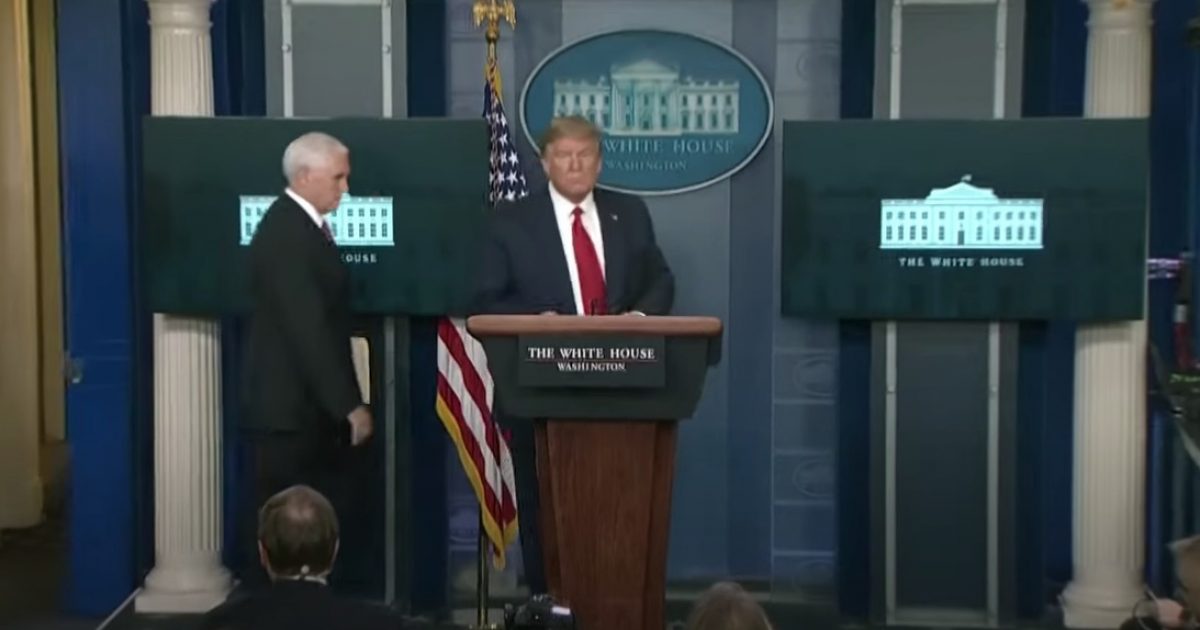 President Trump continues to fight back against the anti-Trump media attacks over the administration’s response to the coronavirus crisis.

Daily press briefings are conducted by President Trump, along with the White House Coronavirus Taskforce, to keep Americans informed.

However, media outlets are highly critical of the briefings and the administration’s handling of the coronavirus.

President Trump hit back at the media during Monday’s press briefing with a video of media outlet’s criticisms and highlighted the actions taken by the administration challenging their comments.

The beginning of the video showed text which read, “The media minimized the risk from the start.”

Also featured in the video were several liberal governors praising President Trump and the administration for their help in handling the coronavirus, including Andrew Cuomo (D-NY), Phil Murphy (D-NJ), and Gavin Newsom (D-CA).

As usual, the media was critical of the video and of President Trump.

.@jonkarl: "I have never seen a video like that played in this room… Why did you feel the need to do that?”

TRUMP: "Because we’re getting Fake News and I’d like to have it corrected.” pic.twitter.com/XlVcjgjuL3

CNN cut away from the live press briefing when the video started, calling it “propaganda.”

“To play a propaganda video at taxpayer expense in the White House briefing room is a new — you can insert your favorite word here in this administration,” CNN anchor John King said when the network cut away.

CNN also changed its lower-third chyron banner throughout the rest of the press briefing when the network cut back in.

Four banners on @CNN over the last five minutes … pic.twitter.com/UBxpCcY2vl

MSNBC cut away from the press briefing, with host Ari Melber saying, “We are cutting into what was not a White House coronavirus briefing.”

Following the video, CBS News’ Paula Reid repeatedly interrupted President Trump, prompting him to say, “Look, look, you know you’re a fake. You know that. Your whole network, the way you cover it is fake.”

President Trump was praised for taking on the anti-Trump media and for the video content.

President Trump destroys the leftist fake news MSM with his own collage of media clips! ???

The DNC mouthpieces sure didn’t see that one coming!!

No, its just clips of the press being wrong once again. This was a brilliant move on Trumps part. He just showed the American people just how crooked and dishonest the press truly are.

Gloves off folks. No more sitting back and accepting the nonsense. The media is an embarrassment to humankind.

The anti-Trump media realizes President Trump and his administration are doing an amazing job with the response to the coronavirus and are desperate to undermine his accomplishments at daily briefings.

President Trump was justified in exposing the hypocrisy of the anti-Trump media.