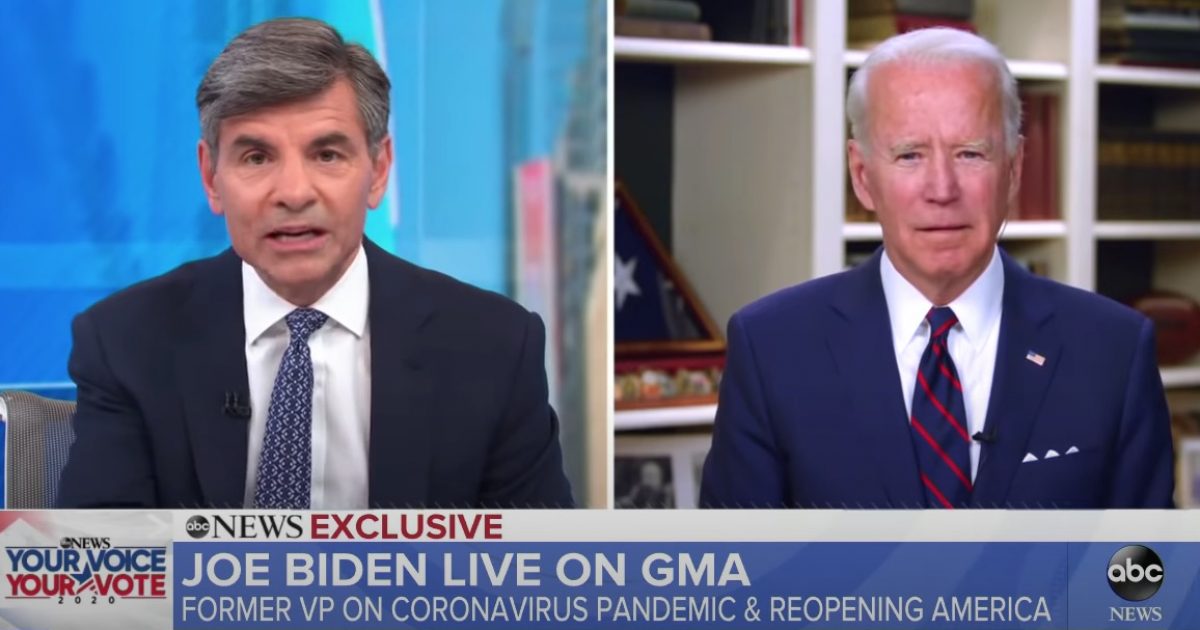 Yet soon after, Biden’s name is one of several names that became public on Wednesday as part of the unmasking request of Flynn’s name.

The documents show that an unmasking request was made in Biden’s name on Jan. 12, 2017. Similar requests were made under the names of James Comey, John Brennan and James Clapper, the former directors of the FBI, CIA and Office of the Director of National Intelligence, respectively.

Flynn pleaded guilty in December 2017 for lying to the Federal Bureau of Investigation (FBI) over his conversations with the Russian ambassador at the end of 2016. The calls were surveilled and subsequently leaked.

Last week, the Department of Justice (DOJ) dropped the case against Flynn and the House Intelligence Committee released transcripts of its investigation of possible collusion between the Trump campaign and Russia.

Biden appeared on ABC’s “Good Morning America” with host George Stephanopolous and was questioned about what he knew about investigations of Flynn while he was in the White House and Biden initially said, “I knew nothing about those moves to investigate Michael Flynn, number one. Number two, this is all about diversion.”

Biden then claimed he misunderstood the question when Stephanopolous questioned his attendance in a January 5, 2017, Oval Office meeting where Flynn’s name came up.

The “target” claimed he knew “nothing” about investigating General Flynn yesterday.

Why would that change today?

Does anybody believe this man? Caught! https://t.co/WfnIqs6BsE

The Trump campaign slammed Biden in a statement calling his claim “limp.”

“Joe Biden’s limp claim that he doesn’t know anything about the railroading of Gen. Michael Flynn just got even more unbelievable.” pic.twitter.com/6fUoW6PfS6

“These documents have absolutely nothing to do with any FBI investigation and they confirm that all normal procedures were followed — any suggestion otherwise is a flat out lie,” Biden Rapid Response Director Andrew Bates said.

Other critics commented on social media.

Why did Joe Biden go on TV yesterday and pretend not to know anything about moves made to investigate General Flynn but today we find out that he sought to unmask him?

Will the media ask him about this? pic.twitter.com/3vqpYXvKl5

From DNC to USA Media (URGENT): Do not interview Joe Biden on TV! But if you do, DO NOT ask Joe about his lying yesterday (on TV) about his participation in the Flynn frame job! This is Imperative! This is an order! Also, DO NOT cover the unfolding unmasking scandal! Thank you.

Because he’s been lying so long he no longer recognizes the truth.

Either Biden forgot about his knowledge of the Flynn investigation which brings into question his mental capacity or he’s lying and must be held accountable.

In both scenarios, it’s bad for Biden.