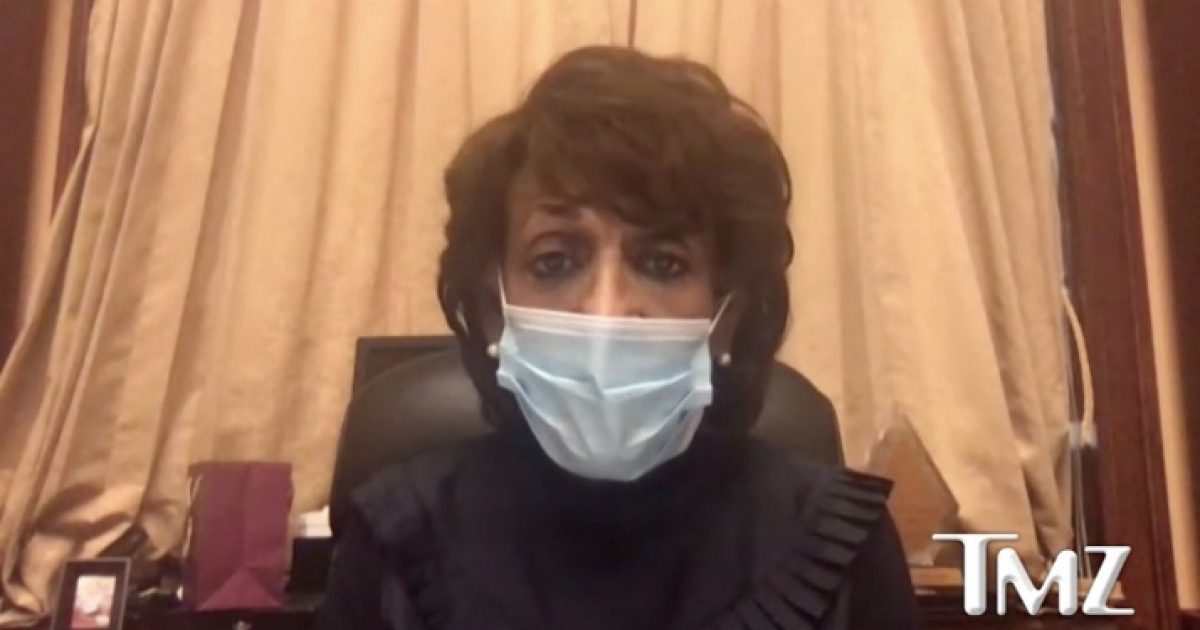 Outrage over the death of 46-year-old Floyd, a Minnesota black man who died while being arrested by police, spurred violent protests in parts of the country.

Floyd’s arrest was caught on video and went viral showing he was pinned down by a white police officer’s knee to his neck.

Also on the video is Floyd saying he could not breathe.

The four police officers on the scene were fired.

Medaria Arradondo, the chief, swiftly fired all four men on Tuesday and called for an F.B.I. investigation once the video showed that the official police account of the arrest of the man, George Floyd, bore little resemblance to what actually occurred.

Waters was interviewed about Floyd’s death on TMZ (watch here).

“I’m thinking about the way that the president conducts himself,” she continued. “In a way he’s dog-whistling, and I think that they are feeling that they can get away with this kind of treatment.”

Waters also said she thinks the officer “enjoyed doing what he was doing.”

Derek Chauvin, the former police officer on video pressing his knee against Floyd’s neck, was taken into custody today.

Chauvin, the former officer seen in a bystander video Monday kneeling on Floyd’s neck, has been charged with third-degree murder and manslaughter, according to Hennepin County Attorney Mike Freeman. He had worked with the Minneapolis police for 19 years.

BREAKING – MPD Officer Derek Chauvin has been arrested in the death of #GeorgeFloyd.
I am at a news conference in Minneapolis City Hall with black leaders in Minnesota and friends of George Floyd. They found out the news in the moment and this is their response. #WCCO pic.twitter.com/JNOE2zm1IG

NBC News obtained a copy of the video of Floyd’s arrest (watch here).

Democrats seized on President Trump’s tweet where he slammed the rioters destroying Minneapolis.

….These THUGS are dishonoring the memory of George Floyd, and I won’t let that happen. Just spoke to Governor Tim Walz and told him that the Military is with him all the way. Any difficulty and we will assume control but, when the looting starts, the shooting starts. Thank you!

The president was clearly referring to the fact that looting and rioting result in violence including shootings.

President Trump issued a tweet to clarify his point.

….It was spoken as a fact, not as a statement. It’s very simple, nobody should have any problem with this other than the haters, and those looking to cause trouble on social media. Honor the memory of George Floyd!

But Democrats twisted his words to make it seem like he was advocating for violence.

The president of the United States is calling for violence against American citizens.

That is so wrong. We need honest reckoning and reconciliation.

If you haven’t already joined the work to replace him in November, start now.

Donald Trump is calling for violence against Black Americans. His advocacy of illegal, state-sponsored killing is horrific. Politicians who refuse to condemn it share responsibility for the consequences.

It’s outrageous for Waters and other Democrats to exploit Floyd’s death for political gain.

Democrats are willing to divide the country with their irresponsible words because they care more about power than the country.