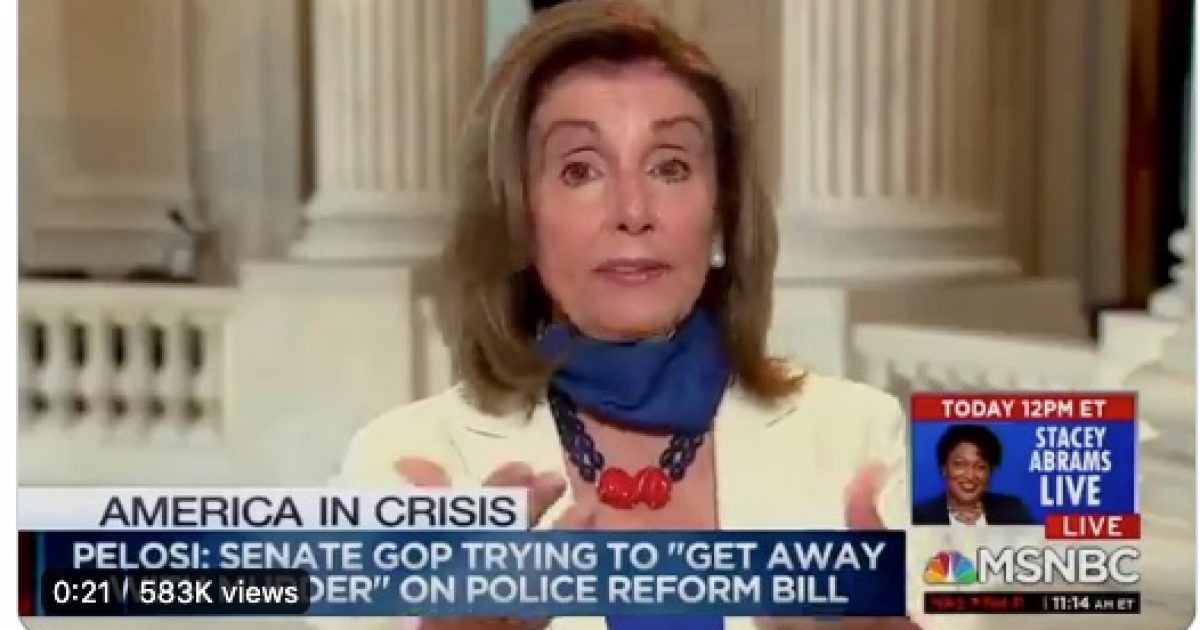 Speaker Nancy Pelosi (D-CA) blasted Senate Republicans for introducing a police reform bill that does not meet her standards.

During an interview on CBS News Radio, Pelosi accused Senate Republicans of “trying to get away with murder, actually — the murder of George Floyd.”

Nancy Pelosi says with their police reform proposals, Senate Republicans are "trying to get away with murder, actually — the murder of George Floyd."

Hear it in this @CBSNewsRadio interview with my colleague @sfutterman:https://t.co/DAsGYssPzD

Following the extreme statement, Pelosi refused to apologize for saying it.

Nancy Pelosi asked if she will apologize for her despicable comment that Senate Republicans are "trying to get away with murder, actually — the murder of George Floyd."

Unsurprisingly, the statement was widely criticized by Republicans.

We’re once again reminded why @SpeakerPelosi never deserves the benefit of the doubt to claim the high road on absolutely anything ever. She’s disqualified herself over & over & needs to surrender her gavel voluntarily or involuntarily. This is disgusting.pic.twitter.com/FbuNR84Q9M

In contrast, Democrats circled the wagons to protect Pelosi.

Schumer backed Pelosi’s comment saying, “what she said was fine with me.”

After Senate Democrats blocked debate on police reform, Chuck Schumer agrees with Nancy Pelosi accusing Republican senators of being complicit in murder: “what she said was fine with me”https://t.co/IxtMUPt5LJ pic.twitter.com/hflkgYuVln

“The actual problem is not what is being offered. It is who is offering it. Took me a long time to figure out the most obvious thing in the room. It’s not they what,” Scott said.

Both Pelosi’s statement and Senate Democrats’ successful effort to block debating the Republican bill is outrageous.

Democrats don’t want to solve problems – they only want to exploit racial tensions for political advantage.