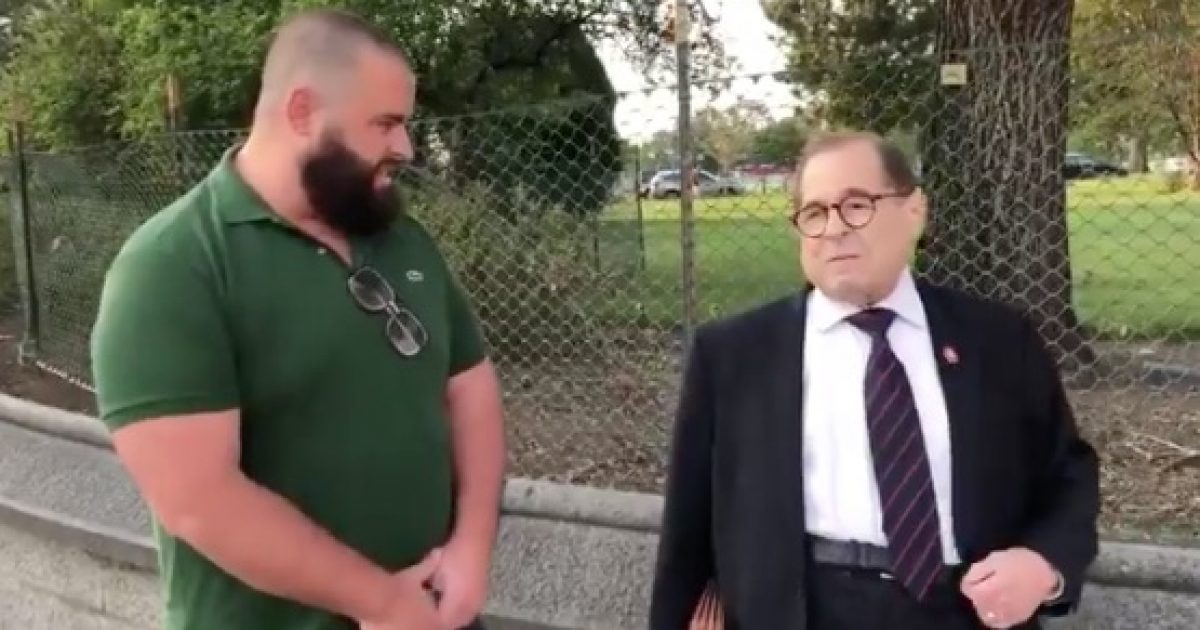 New York Democrat Representative Jerry Nadler refused to acknowledge and denounce Antifa and the ongoing violent protests in Portland and other parts of the country.

Nadler, the Chairman of the House Judiciary Committee, was caught on camera speaking with writer-producer Austen Fletcher.

When asked about Antifa, the uptick in violence and if he would denounce it, Nadler told Fletcher, “that’s a myth.”

I ran into Jerry Nadler in DC and asked him to disavow the Antifa violence/rioting in Portland.

Nadler was slammed on social media.

What’s happening in Portland is NOT “a peaceful protest” as the mainstream media claims. Antifa is trying to destroy what America stands for.

And elected Democrats like Jerry Nadler are fine with letting it happen. https://t.co/fs4TBXAH6T

He's everything that's wrong in D.C.

This Sunday marked the 60th night of violent protesters taking over the streets in Portland.

Nearly every night for weeks, #antifa & other far-left rioters in Portland have used powerful explosive fireworks as weapons against law enforcement, & to start fires. This has resulted in both local & federal officers suffering concussions & burns. https://t.co/tUbFhDtGhO pic.twitter.com/zkj5mMkOce

These are photographs of damage sustained at the Nike Store after a crowd marched on MLK Boulevard. One of the graffiti tags incites arson. pic.twitter.com/dkJHO9zxEi

Portland police declared the protests a riot over the weekend.

In Portland, the authorities declared a riot after protesters breached a fence surrounding the city’s federal courthouse building. The “violent conduct of people downtown” created a “grave risk of public alarm,” the Portland police wrote on Twitter.

Antifa rioters are throwing Molotov cocktails toward federal officers at the courthouse. Earlier in the day, police found a cache of ready-made incendiary devices and fully loaded magazines. Video by @livesmattershow. #PortlandRiots pic.twitter.com/KFPyahZ8Er

Tonight Portland Police were near Lownsdale Square Park. A person pointed out a bag to them. Inside the bag Police found loaded rifle magazines and Molotov cocktails pic.twitter.com/ytpu9pZjqG

A video message from Chief Chuck Lovell about a call for peace. pic.twitter.com/TksujpqOQ2

The ongoing riots are wreaking havoc to properties and continue to put innocent lives at risk and endanger law enforcement.

Nadler’s refusal to condemn Antifa and the nightly violence in Portland and other U.S. cities is reckless, dangerous, and irresponsible.