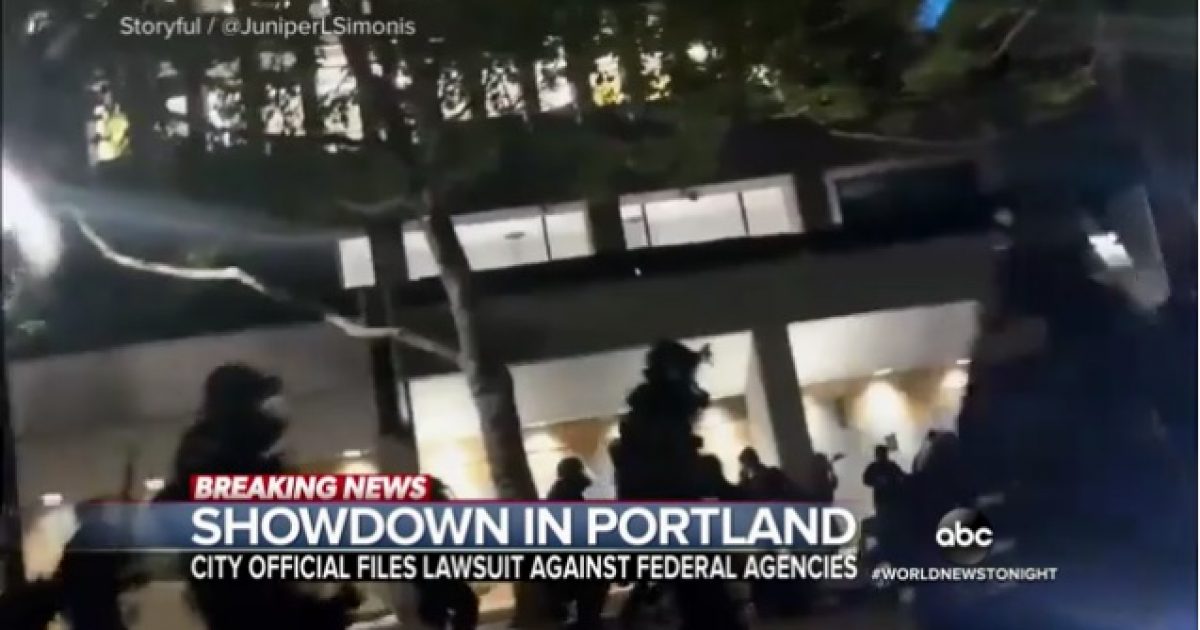 Speaker Nancy Pelosi (D-Calif) called federal agents from the Department of Homeland Security “stormtroopers” in response to their effort to bring order and protect federal buildings including a courthouse in Oregon.

On July 17, Pelosi was outraged over the tactics of arrests in Portland, Oregon.

Soon after, Oregon Attorney General Ellen Rosenblum filed a lawsuit in federal court over the arrests.

Rosenblum claims the federal agents are violating the rights of citizens and their presence is adding more volatility to the ongoing unrest in Portland.

The lawsuit asks for a declaration that the federal agents’ alleged actions violate the First Amendment as well as the Fourth and Fifth Amendments, and “an injunction permanently restraining defendants from engaging in tactics” such as the two incidents Rosenblum says were “unlawful.”

ABC News covered the protests and the lawsuit in a national broadcast.

A snapshot of the violence we are seeing nightly in Portland for 47 days now:

-violent anarchists have repeatedly shot explosive fireworks into a courthouse

-violent anarchists have repeatedly broken windows and doors while attempting to take over courthouses pic.twitter.com/uGxkablXuP

Grabbing peaceful protesters off the streets of Portland and putting them in unmarked cars to detain them is unconscionable and terrifying. It is not de-escalation, it is not the Oregon way, and it must stop.https://t.co/fg5tg9573h

We live in a democracy, not a banana republic. We will not tolerate the use of Oregonians, Washingtonians – or any other Americans – as props in President Trump’s political games. The House is committed to moving swiftly to curb these egregious abuses of power immediately.”

Last night, protesters tried to burn down the Portland Police Association office but the fire was extinguished.

The Portland police declared last night’s actions as a riot.

We are trying to help Portland, not hurt it. Their leadership has, for months, lost control of the anarchists and agitators. They are missing in action. We must protect Federal property, AND OUR PEOPLE. These were not merely protesters, these are the real deal!

Democrats continue to take the side of the mob that is turning Portland into a city of perpetual chaos while President Trump seeks to protect federal property.

Pelosi and the Oregon Democrats are trying to exploit social unrest for political gain but this strategy will backfire because Americans are for law and order.