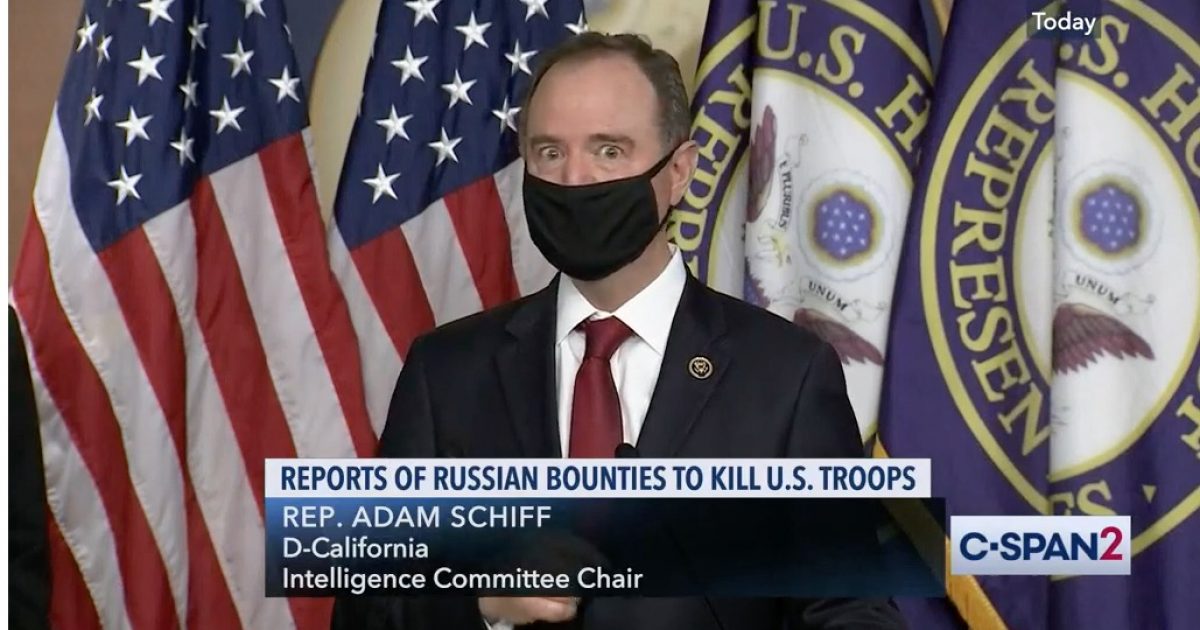 Intelligence Committee Chairman California Democrat Representative Adam Schiff was aware of intelligence about bounties offered by Russia to the Taliban for killing American service members in Afghanistan in February.

Despite knowing about the intelligence, Schiff early on did nothing with it and now he and fellow Democrats are blasting President Trump for not acting against the plot against the U.S. military.

The news story generated national headlines and was discussed on television networks.

On Sunday, House Speaker Nancy Pelosi told ABC’s George Stephanopoulos that Vladimir Putin has something on the president, saying, “With him, all roads lead to Putin.”

"Whether he is or not, his administration knows," Speaker Pelosi says as White House denies Trump was briefed.

“With him all roads lead to Putin … I don’t know what the Russians have on the president politically, personally, financially or whatever." https://t.co/QhGgs7hNlO pic.twitter.com/fGBjpCNAYs

However, The Federalist did a little digging and found this out:

Schiff, who has acknowledged President Donald Trump was never briefed on the so-called intelligence, has thus far refused to disclose that his staff was personally briefed. The revelation raises serious questions that Schiff is once again politicizing, and perhaps even deliberately misrepresenting, key data for partisan gain.

Regardless of the facts, Democrats went on offense to demand answers from the Trump Administration.

Schiff made the rounds on national television and told MSNBC host Chris Hayes this may be another example of President Trump putting “his personal interests above the nation.”

On MSNBC, Schiff discussed the Russian bounty allegations and told host Rachel Maddow that the president “is mad because it’s being reported.”

It’s been 5 days since media reports informed the world of Putin’s alleged bounty program. What has Pres. Trump done?

As commander in chief, the president has no more serious duty than to do right by the Americans in uniform who protect our country.

The least Pres. Trump could do is promise to get to the bottom of these allegations and hold Putin and his cronies accountable for their actions.

It's being reported that the US is investigating a 2019 Russian bounty attack that killed 3 US Marines, including one from Locust Valley, New York and another who worked as a firefighter in the FDNY for 15 years.

On behalf of New York and the American people, I demand answers.

President Trump hit back at The New York Times on social media.

“No corroborating evidence to back reports.” Department of Defense. Do people still not understand that this is all a made up Fake News Media Hoax started to slander me & the Republican Party. I was never briefed because any info that they may have had did not rise to that level

The Russia Bounty story is just another made up by Fake News tale that is told only to damage me and the Republican Party. The secret source probably does not even exist, just like the story itself. If the discredited @nytimes has a source, reveal it. Just another HOAX!

Adam Schiff wasn’t honest about his staff’s interaction with the #impeachment “whistleblower.”

It looks like he’s back to his old political games.

Schiff was briefed on Russian bounties in February, didn’t do anything, and is now blaming the President!https://t.co/FHTSjF5fUp

With the presidential election fast approaching, Schiff and his fellow Democrats are desperate by resurrecting the Russian narrative to attack President Trump and mislead Americans.

The Russian bounty story is a case study in the way Democrats and their media allies can drive propaganda across the nation.

By the time the truth sees the light of day, the propaganda has poisoned an untold number of Americans.