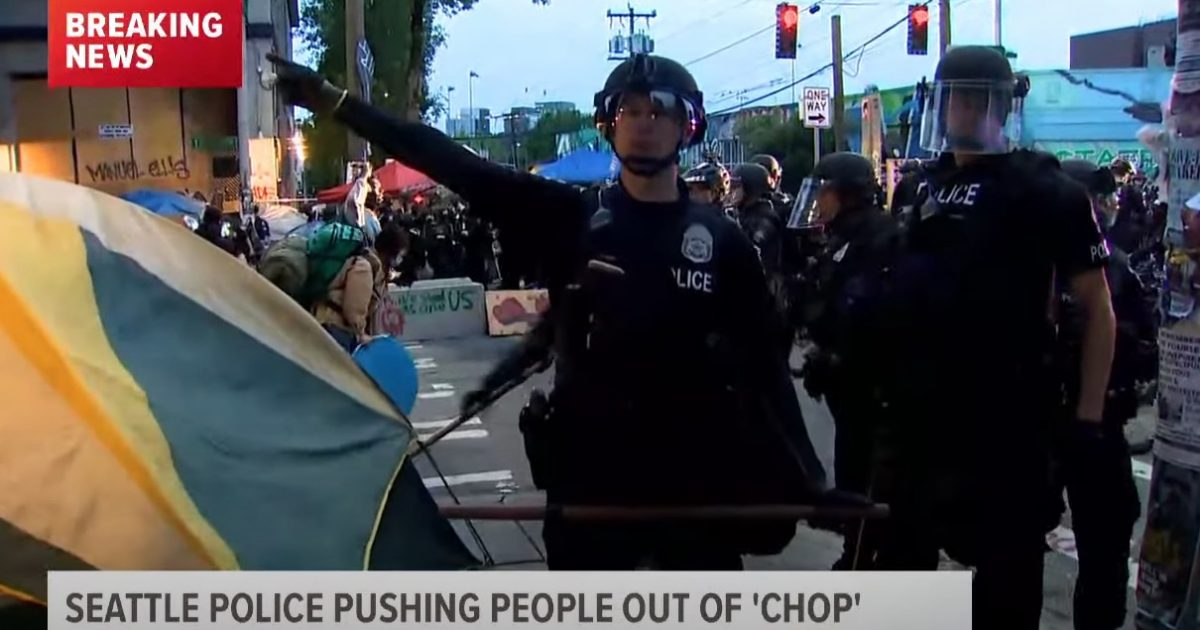 Protesters took control of an area known as Capitol Hill over the last few weeks and police officers were ordered to leave their precinct located within the occupied area.

After rampant violence, including the shooting death of two teens, Durkan issued the executive order and police moved in early Wednesday morning.

Due to ongoing violence and public safety issues in the East Precinct/Cal Anderson Park area. Mayor Jenny Durkan has issued an executive order to vacate the area. Seattle police will be in the area this morning enforcing the Mayor’s order. https://t.co/SpVRYIB8eg pic.twitter.com/JAt2AvUTCr

Numerous arrests were made and weapons seized.

As of 7:45 AM, officers have made 23 arrests in the #CHOP zone for failure to disperse, obstruction, resisting arrest, and assault. One of the arrestees, a 29-year-old man, was in possession of a large metal pipe and kitchen knife when he was taken into custody. pic.twitter.com/12qT7psBQQ

As of 9:25 AM, officers have made a total of 31 arrests for failure to disperse, obstruction, assault, and unlawful weapon possession. Police continue to provide perimeter security for city crews offering services and performing environmental cleanup.

Early on, Durkan made comments that were grossly irresponsible and under her watch, she defended the takeover of this Seattle area.

Seattle Mayor Jenny Durkan says the six-block autonomous zone in her city known as CHAZ, where armed Antifa types have driven off police and set up checkpoints, is "more like a block party atmosphere" than an "armed takeover." pic.twitter.com/5S5RcXyID1

Durkan also said that “We could have the Summer of Love.”

Q13Fox reports Durkan tried to walk back her “Summer of Love” comment following the uptick in violence saying, “I clearly said that in jest, it probably was not the smart thing to do.” (watch video).

Durkan neglected to put an end to the takeover of Seattle streets that resulted in two deaths and other crimes.