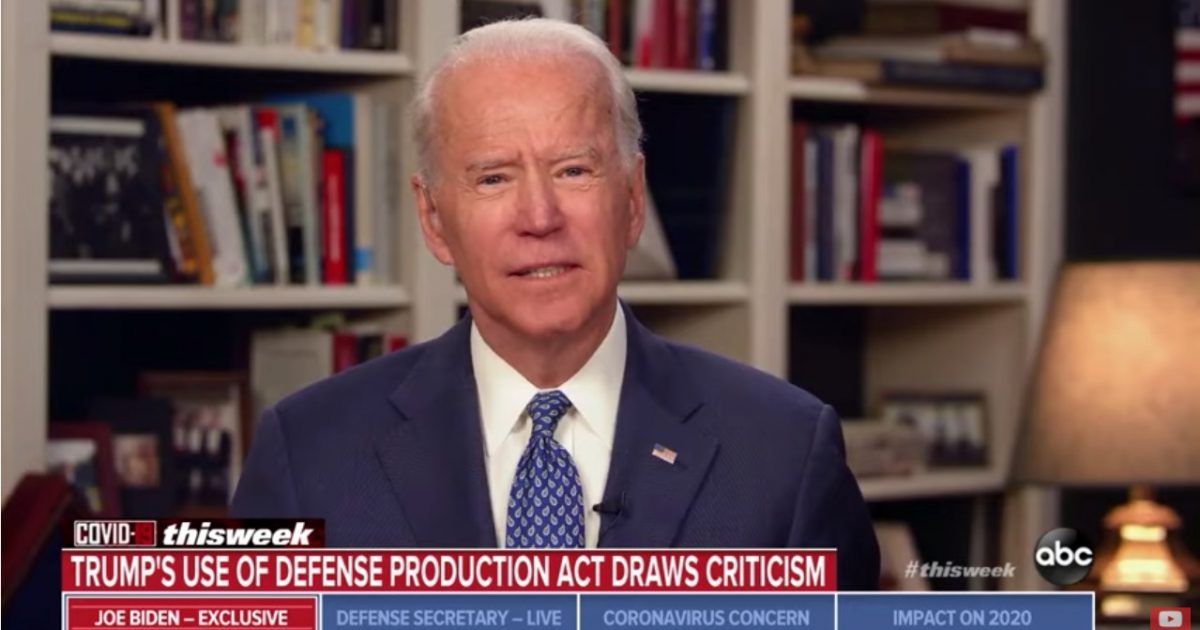 Democrat Presidential candidate Joe Biden sees the COVID-19 pandemic as a path to victory in November but his effort to exploit the pandemic for political gain is sure to backfire.

Criticism of President Trump’s handling of the COVID-19 which originated in China is a constant in Biden’s speeches and in his limited interviews to date.

During his acceptance speech Biden slammed the president for failing to execute his primary role to protect Americans which the former vice president described as “unforgivable.”

Biden continued going after the president in his first interview after the Democrat National Convention. Talking with ABC News’ David Muir about the virus, Biden claimed President Trump initial response was too slow and asserted tens of thousands of lives could have been saved with earlier action.

Ignoring his wildly inaccurate accusations about the president’s response to the pandemic, Biden plans to address COVID-19 reveal his passionate belief in government control.

Under a Biden presidency, Americans will be treated as mere serfs that must obey his orders in the land he rules.

Make no mistake about it, mandates are a central theme of the Biden effort to control the virus.

First of Biden’s pandemic control commandments is thou shall wear a mask. The former vice president has repeatedly called for a national mask mandate.

On August 13, Biden called for a nationwide mask mandate, “Let’s institute a mask mandate, nationwide, starting immediately and we will save lives.” According to him, wearing a mask is a form of patriotism.

Biden also advocated for a mask mandate during his acceptance speech at the Democrat National Convention’s virtual broadcast where he again described his nationwide mandate in terms of patriotism.

Even more concerning is Biden’s second commandment to execute a nationwide shutdown of the economy in an effort to control the spread of COVID-19.

During his post-convention interview on ABC News Biden justified a potential lockdown for saving lives.

The key line in his interview was, “I will be prepared to do whatever it takes to save lives because we cannot get the country moving until we control the virus.”

Whatever it takes? That translates to a loss of personal freedom and economic liberty as casualties in Biden’s America.

Here Biden rationalizes his mandate by redefining freedom from an individual perspective to a collective perspective where actions are regulated by its possible impact on others.

Politically, Biden’s desire to issue mandates is a disaster because it reveals the type of tone deafness that helped doom Hillary Clinton’s presidential aspirations in 2016.

Back then, Clinton coldly told coal miners who were already suffering from the devastating consequences of former President Obama’s war on coal that she was going to put the stake through the heart of the remaining coal industry when she promised to “… put a lot of coal miners and coal companies out of business.”

Today Biden is essentially doing the same with his interest in pursuing a national economy shutdown.

The timing for Biden couldn’t be worse.

Millions of Americans are suffering the economic consequences of state issued lockdowns and small business owners are eager to get back to business.

Consistent with Clinton’s disconnection from the challenges of hardworking Americans to address climate change, Biden puts his interest in trying to control the spread of the virus above the concerns and interests of individual American citizens.

Making commandments from the White House and treating every American the same is bad policy and bad politics. A one size fits all policy that considers a Nebraska farming community to New York City is a strategy doesn’t allow for any policy nuance.

Moreover, the entire idea of shutdowns are being questioned. A recent Wall Street Journal story pointed out, new data indicates “…lockdowns were an overly blunt and economically costly tool” with new thinking that call for “… more targeted restrictions and interventions rather than another crippling round of lockdowns.”

Consideration of a national lockdown is also a reminder of policy creep as a power grab. Originally, the initial state lockdowns were focused flattening the curve to prevent hospitals from being overwhelmed with patients.

The shift by Biden to focus on infection rates and deaths gives him the justification for the more severe policy ideas.

Biden’s COVID-19 overreach shows he is out of touch with everyday Americans which allows President Trump to leverage his winning formula of putting the forgotten men and women above all else.

Tom Borelli Ph.D. is a contributor to America’s Voice News and a TV and radio political commentator.