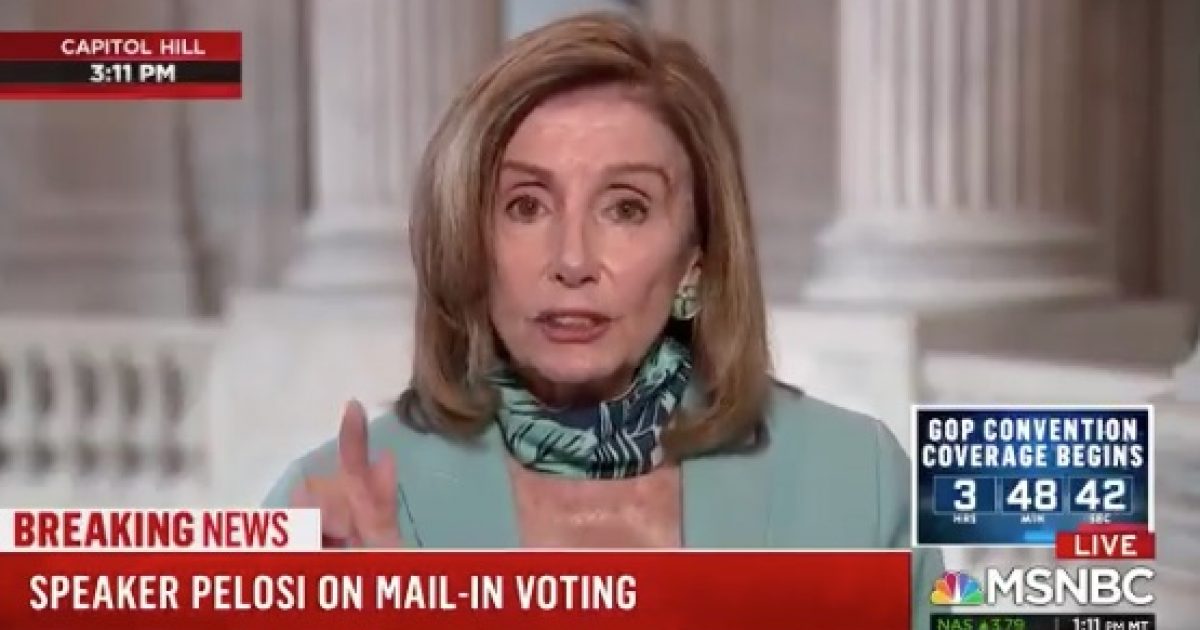 House Speaker Nancy Pelosi (D-CA) went off the rails over her criticism of Republican lawmakers and President Trump calling them “domestic enemies” and “enemies of the state” over universal vote by mail.

Democrats are pushing for universal vote by mail, where ballots are sent to voters across the country whether they requested it or not.

Pelosi made the comments during an interview on MSNBC.

The post office is where the Dems go to find those missing boxes of ballots when its crunch time on voting day.

She is scrambling as she knows she is getting ready to go down in history as a failed Speaker who took politics to the lowest level. Absolutely zero concern for the American people. @SpeakerPelosi

That's enough of her. I don't understand after making this statement how she can fulfill her position as speaker of the house #OustPelosi#VoteRedToSaveAmerica #Trump2020 #BackTheBlue

Pelosi isn’t the only Democrat going after President Trump over universal mail-in voting.

Representative Maxine Waters (D-CA) took to the House floor and called President Trump “a threat to our democracy” and said he is trying to sabotage the presidential election over the postal service.

For THREE years, I warned the American people & my colleagues that this president was a threat to our democracy. Yet here we are today, voting on a measure to save the Postal Service, because it is being sabotaged by a desperate president in order to cheat in the 2020 elections. pic.twitter.com/cLZw0KZ7UJ

Held a press conference at Central USPS in LA. Demanded DeJoy & Trump stop the destruction of the #USPS! Seniors can’t get meds. Families can’t get groceries delivered. Vets can’t get disability benefits, all b/c Trump wants to stop mail-in voting. Afraid he won’t get re-elected! pic.twitter.com/7vQ8jnFevh

In contrast to universal vote by mail, absentee ballots are specifically requested by voters, such as military personnel or senior citizens who are unable to vote in person on Election Day.

It’s important to ensure Americans’ right to vote is done safely and securely.

Upholding the integrity of our voting system – one vote, one person – is something Pelosi, Waters, and their fellow Democrats don’t see as a priority.

Pelosi’s temper tantrum shows the Speaker is willing to sacrifice the integrity of our elections to gain power.