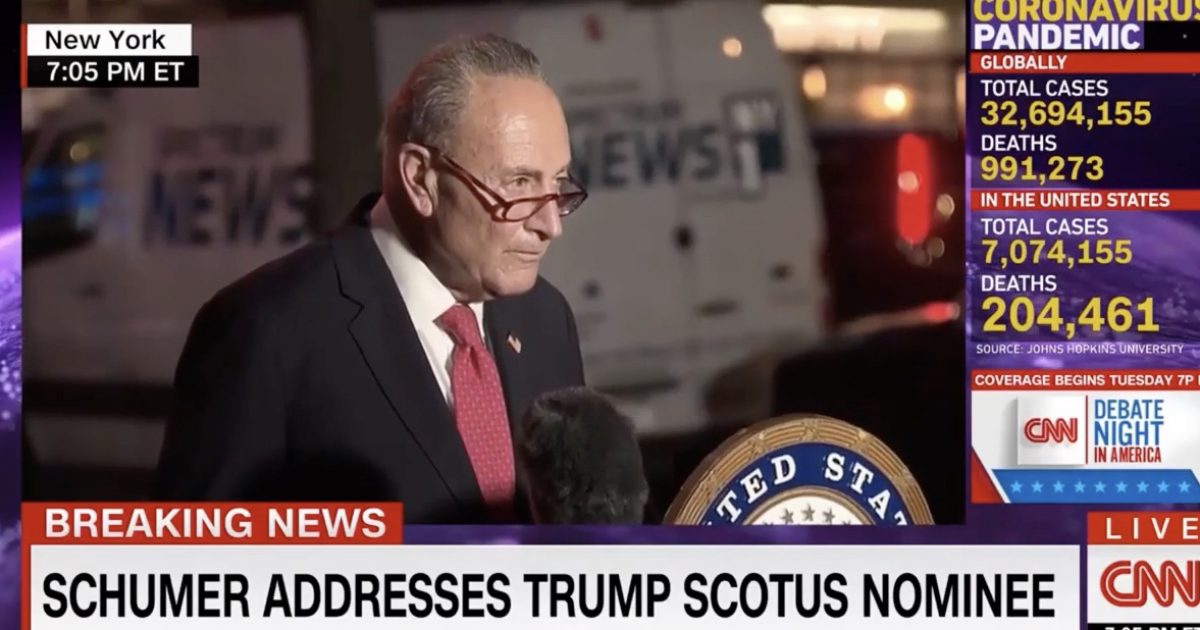 Schumer made the comment following President Trump’s announcement on Saturday.

Schumer said, “My colleagues are united in opposition. Many of them have issued statements in opposition, and we are united. Democrats House, Senate, and Joe Biden in alerting the American people to the danger, danger to their health care, their very health care they depend on, with this nomination.”

Schumer also said voting for Judge Barrett would “strip away health care from over 100 million Americans.”

Senate Minority Leader Chuck Schumer: “A vote for Coney Barrett is a vote to strip away health care from over 100 million Americans. It will happen if she’s on the bench. So once again, New Yorkers, Americans, raise your voice.” https://t.co/eV0pvT0W2R pic.twitter.com/5CGUTESToS

I will oppose the confirmation of Judge Amy Coney Barrett, as I would any nominee proposed as part of this illegitimate sham process, barely one month before an election as Americans are already casting their votes. Americans deserve a voice in this hugely consequential decision.

Senator Dick Durbin (D-IL) said the expectations to approve Judge Barrett in a short period of time “is nothing short of outrageous.”

Sen. Dick Durbin tells @smerconish he doesn’t know yet if Amy Coney Barrett is qualified for the Supreme Court.

“The fact that this Supreme Court nominee may serve on the court for 30 years, it is nothing short of outrageous that they want to approve her in fewer than 30 days.” pic.twitter.com/cGOSIZym4y

“What I am concerned about is anyone that President Trump would have appointed was there to undo the Affordable Care Act. That is why he was in such a hurry,” House Speaker Nancy Pelosi says on President Trump’s nomination of Judge Amy Coney Barrett to the Supreme Court #CNNSOTU pic.twitter.com/T77kno2t0b

While Democrats are for expanding the size of the Supreme Court should they win control over the Senate, Senator Joe Manchin (D-WV) said “I can’t support that.”

“That is not something that I would support. I can't support that” Democratic Sen. Joe Manchin says when asked about expanding the Supreme Court https://t.co/9mkizWHrUu #CNNSOTU pic.twitter.com/VWbRGhsFvu

Democrats’ hostility towards Judge Amy Coney Barrett is because she was nominated by President Trump, is a strong believer of the U.S. Constitution and a woman of faith.

Judge Barrett is extremely qualified to serve on the Supreme Court.