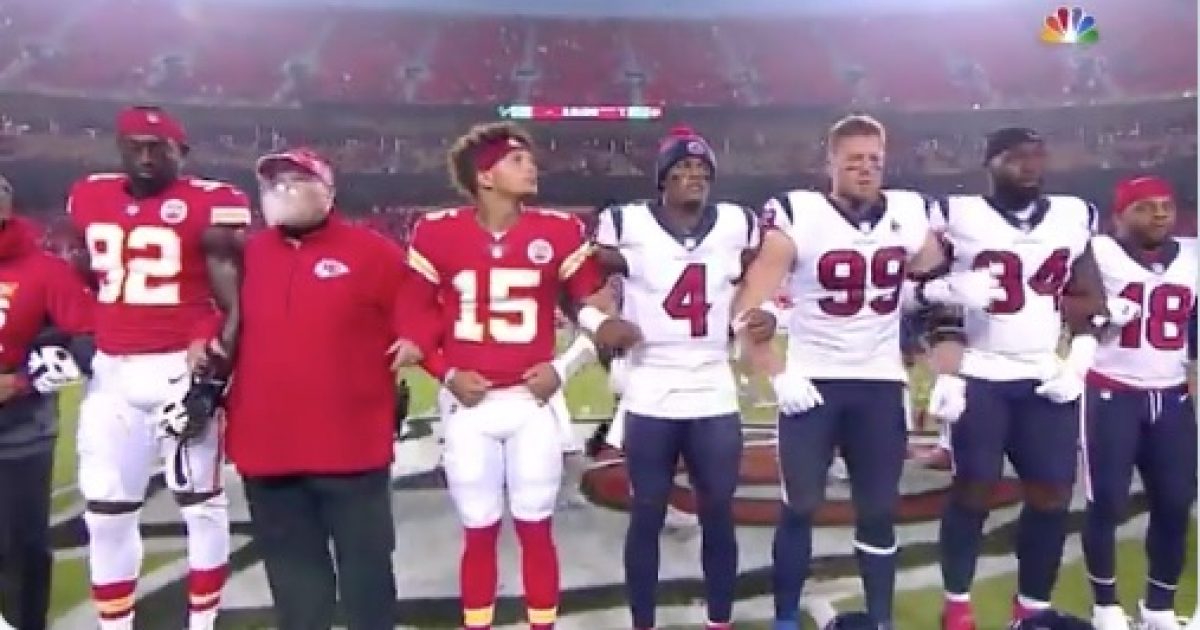 It sure looks like the NFL promoting social protests on the football field is backfiring.

According to Deadline, the identical TV ratings for the first game between the Super Bowl champions Kansas City Chiefs and the Houston Texans dropped 16.1 percent in viewership compared to last year’s first game.

Each team acted differently during the pregame ceremonies.

The Houston Texans remained in their visiting team locker room during “Lift Every Voice and Sing” and the National Anthem.

In contrast, the Chiefs remained on the field during both songs.

Boos from the limited crowd, due to COVID-19 rules, began after the Texans returned to the field to join the Chiefs during a moment of silence and a show of unity.

Football fans booed the Houston Texans and Kansas City Chiefs for joining arms in a moment of silence before last night’s game pic.twitter.com/ukwtxshnPK

The booing reflects the drop in viewership by fans.

The NFL pushed its effort for equality on Twitter.

A moment of silence dedicated to the ongoing fight for equality in our country. #ItTakesAllOfUs pic.twitter.com/srC0SlnWdh

Some claim the booing was for the visiting team running on the field.

Another perspective on the booing that occurred during last night's Moment of Unity before the Chiefs/Texans game. I've been hearing from those in attendance so I think it's important to acknowledge my initial perception may have been wrong. pic.twitter.com/nAlWm3xENI

The country is divided and sports teams including in the NFL are now part of dividing Americans further apart.

Not long ago, sports served as an escape from reality but now by adopting social issues as part of its brand, professional sports lost that appeal.

Expect the drop in ratings to continue as Americans reject politics on the football field.