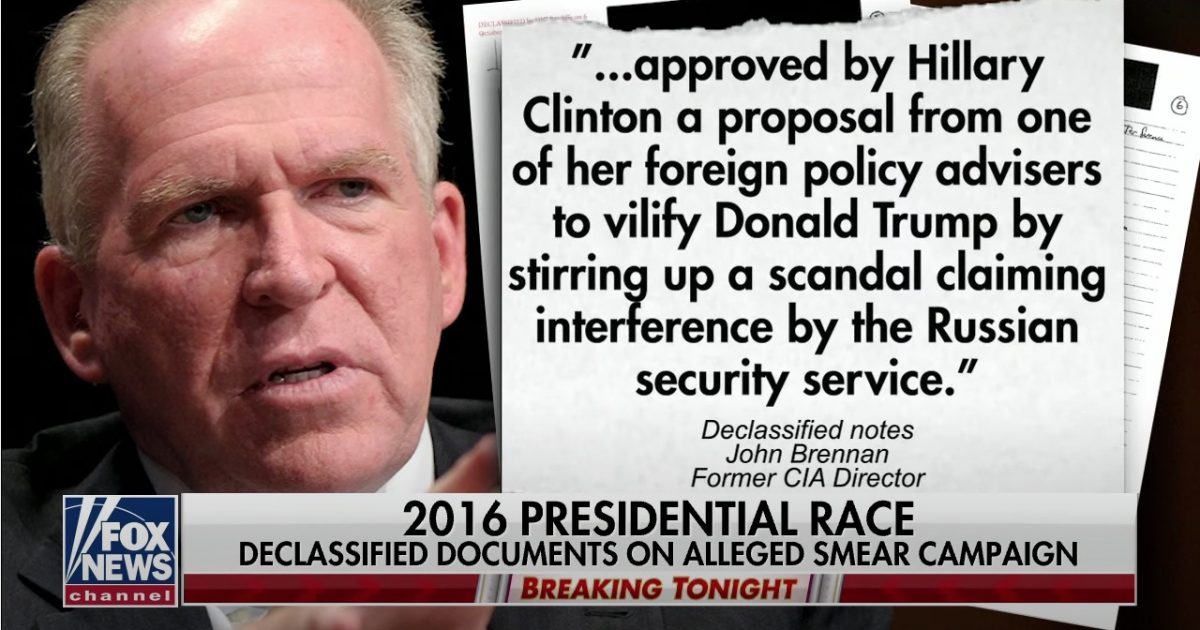 Director of National Intelligence John Ratcliffe on Tuesday declassified documents that revealed former CIA Director John Brennan briefed former President Obama on Hillary Clinton’s purported “plan” to tie then-candidate Donald Trump to Russia as “a means of distracting the public from her use of a private email server” ahead of the 2016 presidential election, Fox News has learned.

The story is based on handwritten notes Brennan made on a CIA document that Ratcliffe declassified and made public.

According to the story, the CIA gave the information to the FBI to investigate.

Kelly was also critical of the media for not making this matter front-page news.

'HOAX!' ?: The tightly-produced media machine will cover for everything from Hillary's 'Russiagate,' to Biden's 'cheesy' campaign, says @gregkellyusa. https://t.co/VlT7z8v2lm pic.twitter.com/G46TpEMMql

Here’s what we know:

-Hillary Clinton contrived the Russia hoax to distract from her email scandal.

-Democrats lied for years to cover it up.

Will the media correct their past stories on collusion?

President Trump declassified information related to the Russia collusion issue but the intelligence agencies acted very slowly on his request.

All Russia Hoax Scandal information was Declassified by me long ago. Unfortunately for our Country, people have acted very slowly, especially since it is perhaps the biggest political crime in the history of our Country. Act!!!

Wow!!! NOW DO SOMETHING ABOUT THIS, THE BIGGEST OF ALL POLITICAL SCANDALS (IN HISTORY)!!! BIDEN, OBAMA AND CROOKED HILLARY LED THIS TREASONOUS PLOT!!! BIDEN SHOULDN’T BE ALLOWED TO RUN – GOT CAUGHT!!! https://t.co/hf7zjqZYQ4

Despite having knowledge about Clinton’s plan to create a Russia-Trump link as part of her political strategy, the FBI not only ignored it but used it to investigate then-candidate Donald Trump and after he was elected president.

The mounting evidence is showing former President Obama and the intelligence agencies under his control abused their power to undermine President Trump.