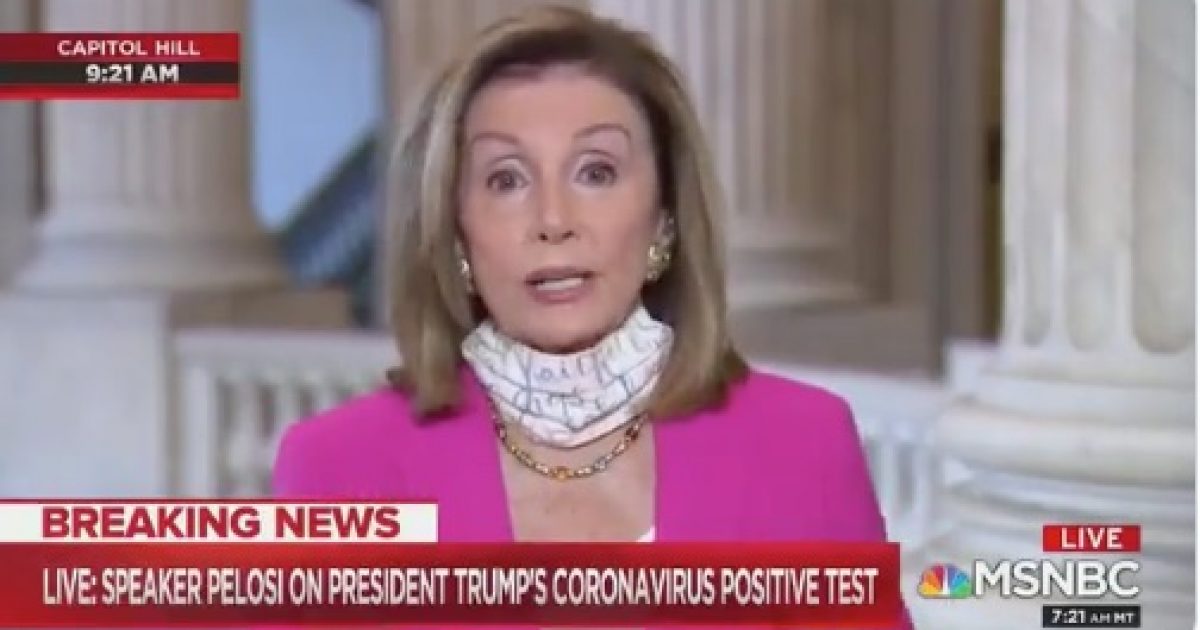 During an interview on MSNBC, Pelosi expressed concern about the president’s illness but then proceeded to attack President Trump, saying, it was an “invitation for something like this to happen.”

House Speaker Nancy Pelosi (D-CA) called Pres. Trump's positive test for COVID-19 "tragic" and "very sad," adding that "going into crowds unmasked and all the rest was sort of a brazen invitation for something like this to happen." pic.twitter.com/gLcsCkhSaC

Pelosi was not alone.

He still won't wear a mask.

He only cares about himself and his life, NOT those around him or the people he took an oath to protect.

Too many lives lost because of his deadly lies.

Omar seized on the diagnosis to comment on President Trump’s recent rally in Minnesota and claimed he and his Republicans in the state “… are actively spreading a deadly virus. They are a risk to the public health of my constituents and our country.”

Tapper described the president’s infection “… as a symbol of your own failures.”

CNN’s @jaketapper: “Sick and in isolation, Mr. President, you have become a symbol of your own failures. Failures of recklessness, ignorance, arrogance. The same failures you have been inflicting on the rest of us … Get well and get it together" #CNNSOTU pic.twitter.com/sJLkbFrR6o

Reid spread a conspiracy theory that President Trump isn’t actually infected with the virus but that he faked the illness in an effort to get out of the next debate with former Vice President Joe Biden.

Here’s how wrecked Trump’s credibility is at this point: I’ve got a cellphone full of texts from people who aren’t sure whether to believe Trump actually has covid. “He lies so much,” one friend just texted. “Is he just doing this to get out of the debates?” others are texting.

Filmmaker Michael Moore pushed another wild theory that President Trump could be faking the infection to improve his standing with the public and to help his presidential campaign.

To set the stage, Moore called the president “A serial liar,” to cast doubt on any statements coming from President Trump.

Moore posed the question, “…so why on earth would we believe him today?”

“He’s an evil genius and I raise the possibility of him lying about having Covid-19 to prepare us and counteract his game. He knows being sick tends to gain one sympathy. He’s not above weaponizing this.”

Democrats and their media allies are using the president’s coronavirus infection to score anti-Trump political points.

The pandemic is one of the major Democrat themes and they are leveraging the president’s health condition to hammer home their view that President Trump’s response was inadequate.